In a town like Black Rock, a lot can happen in 24 hours.

In many ways, Bad Day at Black Rock summarizes our journey through 1955. That’s exactly why I’ve saved it for last as we end our 10-week examination of the films of 1955 here in the dangerous town of Black Rock. For me, this John-Sturges-directed movie sits at the crossroads of multiple genres: western, crime, thriller, and noir. It’s not a coincidence that several of these genres (western and noir) culminated in the fifties, with later entries in these categories carrying necessary qualifiers like “revisionist” or “neo.” The films from those genres/categories that were made during the 1950s are the purest you’re likely to find, and Bad Day at Black Rock is a film school session on screen.

The plot is deceptively sparse. A passenger train stops in the desert settlement of Black Rock, a town that it has passed by for years without ever stopping. Off steps a one-armed man, John Macreedy (Spencer Tracy). He’s looking for an old friend, but the townspeople of Black Rock make it clear that he is not welcome. As the hours tick by, Macreedy comes to the realization that the town of Black Rock has a secret that some are willing to kill in order to protect, and the train out of town that he’s supposed to catch in the morning may be too late.

Sturges is one of the greats, responsible for classics like The Magnificent Seven and The Great Escape. Under his direction, Bad Day at Black Rock becomes a taught little thriller that ratchets up the tension over the running time, which is a very brief 81 minutes. Sturges doesn’t need any longer; the film basically plays out in real time with every action and every conversation bringing us closer to the finale. This movie isn’t technically a noir, but it successfully marries an impending sense of dread with a beautiful, full-color western landscape while wasting absolutely nothing. Like High Noon from three years earlier, we experience the events of the film along with the characters themselves. This has the effect of making us feel like we’re not merely observing, but are active participants.

I have to be honest about something. There are a handful of classic actors that I’ve been unable to connect with for some reason, and Spencer Tracy is one of them. Wait, don’t leave. I get why he is so highly regarded, but I’ve always considered him to be kind of…vanilla. In this role, however, he turns in a very stoic, confident performance that plays to his strengths. He seems quietly threatening in his role as a World War II veteran who came back from battle diminished, but hardened into steel. I honestly can’t imagine anyone else playing the role of John Macreedy in this movie, and one of the reasons that the film succeeds is because of what he brings to the table. He is perfect for this part, and it brought him an Oscar nomination that I think he deserved. 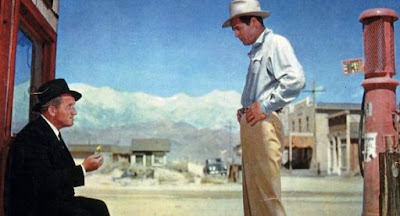 The supporting cast of Bad Day at Black Rock is similarly note-perfect in their contributions, serving as a who’s who of character actors from the time. We get Dean Jagger (White Christmas, Vanishing Point), Walter Brennan (Rio Bravo), and Ernest Borgnine, who was about to win an Oscar in 1956 for his role in Marty, which also landed the “Best Picture” statue. Lee Marvin always delivers--especially as the heavy--and he gets to be a real piece of work here, as does Robert Ryan as one of cinema’s most despicable characters. You can catch both Lee Marvin and Robert Ryan together again in another classic, 1967’s The Dirty Dozen. And since I’ve accidentally started a game of “Six Degrees of Bad Rock,” Ernest Borgnine and Robert Ryan worked alongside each other again in 1969’s The Wild Bunch. Pretty much everyone in this movie is somebody, including Ann Francis, an actress who we mentioned recently when we discussed Blackboard Jungle. She didn’t have a lot to do in that movie, and she has even less screen time in this one. Yet her contribution to Bad Day at Black Rock is significant, as her character is integral to the story. Remember, nothing is wasted, even the itty bitty parts.

I’ve mentioned several times over the past ten weeks that America in 1955 was a country still very much living in the shadow of World War II. The impact of that war on society was and still is unparalleled by any other event in history. When you watch fifties films, WWII always seems to be lurking around in the background somewhere. You find it in the ambiguity of certain characters, or in the quest for redemption that we see in the western heroes. You feel the sense of hopelessness in film noir. It’s just always there, but in Bad Day at Black Rock, it’s at the forefront. The film has a lot to say, and it deals with the racism on display not just against the Japanese who bombed Pearl Harbor, but also against the Japanese Americans living on home soil who committed no atrocity other than being born with the wrong skin color and ancestry. It’s a progressive, damning message that not a lot of people were talking about in 1955. And in proving that everything is cyclical and that we don’t ever seem to really learn anything, the messages of this movie from over sixty years ago are still just as relevant today. This could play in theaters right now with almost no changes and still hit home. Substitute “Middle Eastern” for “Japanese” and update telephones and telegrams with iPhones and e-mail and you’ve got a thriller ready for screens. 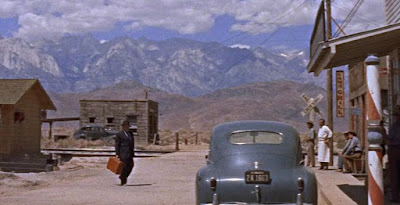 That’s because this story has become timeless. You can see its genre-bending influence in the work of the Coen Brothers, or even in Sam Raimi when he walks on the darker side with movies like A Simple Plan. It’s been retold a lot over the decades, but it was born in 1955, one of my favorite movie years. The conventions of the Golden Age of Hollywood had given way to a more realistic, fallible Hollywood, but a Hollywood that still believed in the magic and morality of the movies. Bad Day at Black Rock somehow manages to be the ultimate 1955 movie: tired and a little bit angry, yet hopeful that tomorrow will be better than yesterday. If that doesn’t sum us up, I don’t know what does.

Thanks for riding along in the DeLorean for the past ten weeks. I hope you’ve had as much fun reading about these movies (and hopefully watching them) as I have had writing about them. I’m looking forward to our next trip, whenever that may be, as we once again travel back in time to the great movie years.