Adam: And I’m Adam Riske. This week, we’re reviewing Pirates of the Caribbean: Dead Men Tell No Tales, because I’ve always wanted to review a Pirates movie on the site and Rob owed me one.

Rob: In this fifth (and final?) installment in the popular series, Pirate Kid (Brenton Thwaites) seeks to free his Zombie Dad (Orlando Bloom) from the clutches of a cursed Zombie Ship using the ancient power of Mjolnir, the Hammer of Thor. Meanwhile, Science Lady (Kaya Scodelario) also seeks Mjolnir, hoping to complete her father’s work and prove that women aren’t witches just because they know how to read. Across town, Jack Sparrow (Johnny Depp), having just pulled off his Fast Five bank vault homage and not doing much else, decides to join the pair for high seas adventure. Elsewhere, Zombie Captain (Javier Bardem) seeks revenge on Sparrow for trapping him on A Different Zombie Ship many years ago, making a deal with Old Pirate Who Apparently Knows Sparrow (Geoffrey Rush) to use his Magic Compass to hunt him down. It’s worth noting at this point that I’ve never seen the other Pirates of the Caribbean movies and have no idea what’s going on. 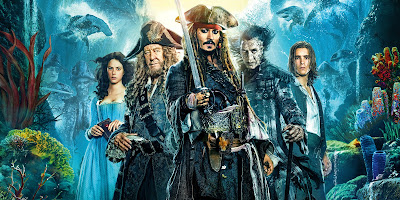 Adam: Well, when you describe it like that...yeesh. The Pirates franchise, to me, has always been about the characters, the action sequences, the music and how gorgeous it is to look at for 2+ hours. The plot is secondary and admittedly always the weakest part of this series. It being overstuffed and confusing is almost its own trope at this point. I enjoy this franchise quite a bit, which caught me by surprise because I didn’t realize that until my viewing of Dead Men Tell No Tales. I was very much on the Pirates bandwagon (I like Curse of the Black Pearl and love Dead Man’s Chest) until I saw the third entry, At World’s End, which I found very disappointing, and I really didn’t enjoy On Stranger Tides. The first half of Dead Men Tell No Tales is a slog, but I thought it rallied in the second half enough where I found myself happy as I left the theater. If the franchise carried on after this, I would be fine with it. Since most of what I enjoyed was the payoff of certain character arcs (Rush, Bloom, Knightley, who has a Sean Connery in Robin Hood: Prince of Thieves cameo) and just simply being back in this world, I can only imagine how aggravating this movie would have been for you as a novice to the franchise. This latest one was pretty fan-servicey and I’m susceptible to that.

Rob: It wasn’t easy. I can only look at Dead Men Tell No Tales as its own story, and that story is disjointed and frustrating. It’s a big, loud, incoherent mess of a movie with a lot of backward logic and no real character arcs. But, look. I know no one cares about that. This is a nostalgic victory lap for the people who grew up loving this franchise, and I won’t begrudge them their good time at the movies. I have a thousand questions about why Jack Sparrow’s compass had the power to free Bardem from the Phantom Zone and why Orlando Bloom is only like ten years older than his son, but I also know it doesn’t matter. To you, this is a rip-roaring reunion with your favorite characters. What does it matter if it makes no sense to me?

Adam: Dead Men Tell No Tales certainly has problems. Pirates, at its worst, often feels like a bunch of scenes thrown together at random with no sense of pace/tone/continuity and there’s some of that here. Some of the performances aren’t great and that drags down the proceedings. Javier Bardem is a disappointing villain (similar to Charlize Theron in The Fate of the Furious) because there’s an expectation he’ll bring something incredible to the table after his great villain turn in Skyfall. The design is cool and I love the way he hacks up saying “Jack Sparrow,” but that’s about it. His character motivation is pretty stock and uninteresting.

The co-leads of the movie are a problem as well. Brenton Thwaites is very flat, so having him drive so much of the plot early on makes those exposition scenes drag. Then there’s Johnny Depp. I wrote on Twitter that it’s amazing how a franchise that thrived on Depp’s Captain Jack Sparrow in the beginning now has to survive that character. He doesn’t do anything for me anymore. He was a revelation in Curse of the Black Pearl and the filmmakers gave his character some interesting motivations and developments in Dead Man’s Chest (I’ll always be bummed he and Knightley’s Elizabeth Swann never hooked up - they are a much better couple chemistry wise than her with Bloom’s Will Turner...but I digress), but ever since the cliffhanger in Dead Man’s Chest Sparrow is just going through the motions. By the time we see him do his thing in Dead Men Tell No Tales, it’s just white noise. Depp’s reputation taking such a public hit in recent years (and his onslaught of garbage movies with vampy performances) doesn’t help his cause. I get why people would hate this movie for those reasons alone. Sigh. The best way I can describe my complex three-star review of Dead Men Tell No Tales is I didn’t realize how happy I would be just to see Orlando Bloom and Keira Knightley again in a Pirates movie. It’s like he was trapped on The Dutchman for 10 years and it really took 10 years! Shit feels earned.

Rob: I concede this point because it’s my fault for not being familiar enough with the series. I just wish I hadn’t spent so much time with Blandy McAction Guy if I was only supposed to care about his dad. I liked Kaya Scodelario quite a bit, though. She’s got a young Nicole Kidman thing going, and I wish she’d had a bit more latitude to develop a character. I also liked what the film had to say about capable women in that time period, and I wish it didn’t ring so true in 2017. Bardem is always reliable, but he’s got nothing real to do.

Here’s my question: is Jack Sparrow the big draw in this series? Is his story function to just be in the way, less C-3P0 comic relief and more “dipshit asshole who’s nowhere near as charming as he thinks he is”? Is there anything redeeming to balance out his buffoonery? Maybe I’m missing some context because I’m unfamiliar with the series, but usually the bumbling goofball comes through with the heroics in some way before the end of a movie like this. And what’s with all the awkward sex jokes? Isn’t this a Disney franchise? I know Disney has been selling sex to pre-teens for generations, but I don’t need to hear about how Depp wishes he was hung; I need to understand why the ghost zombies are corporeal enough to stab you, but not enough to be shot.

Adam: It’s going to be bawdy...they’re pirates, Rob, yo ho! As for Jack Sparrow, the draw to him early on was that Bloom-Knightley drove the plot and Depp was this wild card that came in and shook up the movie. The proper British world trying to reconcile the pirate world and the pirate world was the fun counterculture people in their hearts wanted to be part of. Then Sparrow had some dimension later on (he’s noble but mostly a coward, smart in a “drunken master” kind of a way), which was jettisoned after Gore Verbinski left the series. In the last two movies, he’s mostly what you describe -- comic relief and a nuisance. What’s funny is that by the end of Dead Men Tell No Tales, you realize how much Geoffrey Rush’s Barbosa has become the heart and soul of the franchise. Early in the series, his character (not the performance) was a drip because he was the buzzkill pirate in comparison to Jack Sparrow, but now Barbosa has a certain amount of gravitas that caught me by surprise. Rush’s schtick aged much better than Depp’s. And as for Kaya Scodelario...um, I think I’m in love. Like, she looks so good in this movie and her performance is lively and fun. She needs to be in all of the movies. The young Nicole Kidman comparison you made is apt. One of the reasons I enjoy the Pirates series so much is that it looks beautiful and expensive (it’s a weird reason, admittedly) and Scodelario looks like $230 million bucks (i.e. the film’s budget). Can you believe that the two most expensive movies ever made were the third and fourth films in this franchise? Anyways, anything you want to add as we wrap up?

Rob: I was going to go on a whole rant about causality in screenwriting and how this movie just has people sort of bump into each other for ten pages until a big, violent thing happens, but I’ve discovered that complaining about story structure in a summer franchise movie is an easy way to get people to hate you. I do wish the goals (and why they conflicted) were clearer, though. Salazar and Sparrow were...sort of antagonists? Except then Salazar wanted the trident? And did Barbosa know that…

You know what? It doesn’t matter. This is a big Mark Off for me. It’s all CGI noise, and I couldn’t wait for it to end. I know this franchise means a lot to people, and I apologize if my negative reaction puts anyone off of seeing this movie. I want you guys to have nice things! But Dead Men Tell No Tales killed any and all interest I had in catching up with the first four films. Pretty people in period costumes. Some ships are above the water, while others are below it. Monkeys make Johnny Depp uncomfortable. I’m all set. Why didn’t we see Baywatch, again? I could have at least gotten my Daddario on.

Adam: But this gave us Scodelario. That’s a pretty good ario. I’m voting Mark Ahn for Dead Men Tell No Tales. I had fun. How did I forget to talk about how cool CGI ghost sharks were? Until next time…