The Screwball Delights of The Palm Beach Story 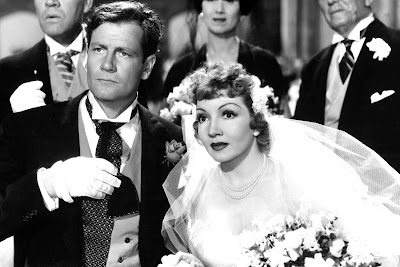 “Have you ever heard the one about the heiress, the train and the case of mistaken identity?”

In my mind, I imagine that is this is the joke that inspired Preston Sturges to start making screwball comedies 80 years ago . He had the mix down to an art and we have him to thank for bringing “romance” and “comedy” together. There are many things I love about his movies, like the the witty dialogue, the strong female characters and the use of satire. The Palm Beach Story, released in 1942, is one of my absolute favorite movies. This film is very entertaining and checks off every item on the screwball “to do” list. I saw this film on TCM growing up but didn’t know the title until I was reunited with it in a classic film class in college.

The basics of the movie are that McCrea is a destitute architect married to Colbert. They are in such a dire financial situation that Colbert decides she’s going to Palm Beach to get a divorce and find a rich man to marry so she can fund McCrea’s project. Colbert states matter of factly that this is how she will solve the problem of their dwindling finances and her inability to be a good homemaker. She leaves him and, as he chases after her, she asks a taxi driver where to get a quick divorce. He responds, "For my money, this time of year, Palm Beach." Colbert ends up on a train to Palm Beach, where hijinks and millionaires ensue. 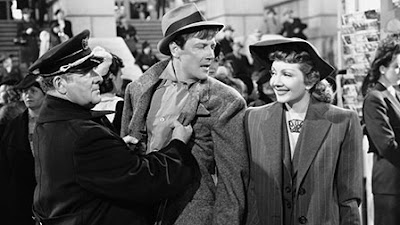 This is the hard part of watching old movies: the fact that times have changed so drastically. There are some things that are easier to disregard than others, like the characters smoking all the time. But as a woman, it is harder to watch a film where a female character needs to go from being married to a poor man to being married to a rich man to get the money for a poor man’s project, all based on her looks. It doesn’t make me like the film any less -- I can’t tell a film made 80 years ago that it should change its gender politics. But there is something wince-inducing every time Colbert is told “she’s too pretty to be doing (insert mundane task here).” I think what keeps me watching this film over and over is Colbert. She is truly phenomenal at playing vulnerable while actually being five steps ahead of the other characters. While she is explaining to McCrea why she needs to divorce him, she says she doesn’t have any useful homemaker abilities. She then meets the millionaire Hackensacker (Rudy Vallee) on the train, and impresses him with her resourcefulness and “wife-like” skills. Colbert only wants to leave McCrea due to their financial situation and her inability to contribute financially given the restrictions of the time. She wants to use her only “useful asset,” her beautiful face, to help the man she loves. I am not saying this is sound logic, but 80 years ago women did use this logic in a world of limited possibilities. 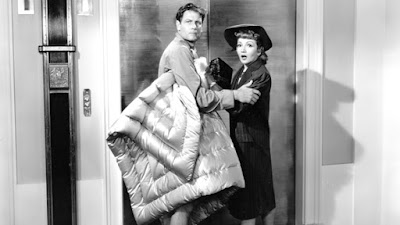 Colbert is playing every man she comes across, but not in a man-eating, sinister way. They have no qualms about spending money on her even though she has promised them no sexual favors. These men basically want to take care of the damsel in distress. This is what makes it slightly easier for me to watch; it seems to be out of the value of chivalry that they want to look out for her. Her ability to “play dumb” and not be a tease is a tricky balancing act. She’s very beautiful but not overtly sexy, and has a really adorable way of giggling into her hand and hunching over at the same time.

The comedy in the film comes directly from the dialogue, like the interaction between Colbert and the “Wienie King” (Robert Dudley) in an early scene as he is touring her apartment that the landlord is renting out from under them. Vallee’s seriousness versus Colbert’s joviality leads to some very funny conversations about the difference between men and women. The parts that don’t hold up for me are the antics of the Quail hunting club on the train, mainly because we’ve all had enough of rich, old men getting away with unacceptable behavior. The racial portrayals are also hard to watch, especially the lover who accompanies Vallee’s sister “Princess” (Mary Astor), Toto (Sig Arno), who is some kind of hybrid of European cultures. His inability to speak English or walk in a straight line, played for laughs, were some of the biggest ick moments for me. Vallee is really more prevalent in the film than McCrea, whom we jump back to from time to time as he tracks down Colbert down to Palm Beach. McCrea is great at playing a stern looking, jilted husband, but he is kind of a secondary character to Colbert, the focal point. Vallee creates an endearing, calm, millionaire that can match wits with Colbert as she throws curve balls at him. His weird quirk of keeping tabs of all the expenses she accumulates without totalling it up isn’t necessarily needed but appreciated.

At the end, McCrea and Colbert fall back in love despite it “costing them millions,” as she exclaims during their final embrace. It seems to fit because McCrea doesn’t want her to marry someone else to fund his project. He is OK with being poor and going into deeper debt as long as he has Colbert. She realizes she loves him and couldn’t marry someone just for the money, despite her good intentions. We don’t get a scene where he “claims” Colbert, or shakes her into submission or smacks her around. He really wants her back and she truly wants to be with him. 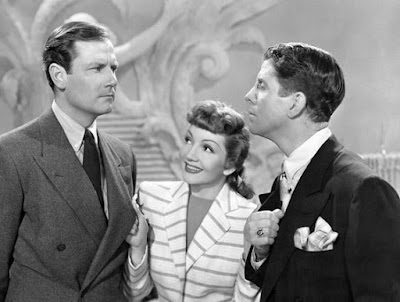 The most intriguing, and wackiest, parts of the film are the beginning and ending credits. The intro is sped up and freeze-framed with fast paced music to reveal Colbert first bound and trapped in a closet, then escaping, all dressed up in wedding dress. This is intercut with McCrea changing from one suit to another and rushing to the altar. This jumps to a frame of the married couple with an embroidered type that says “And they lived happily ever after...or did they?” Then it jumps to five years later--the present tense of the movie. At the end, after McCrea and Colbert are back together and Vallee and his sister are broken hearted, they ask off-handedly if either or both of them have a sibling. McCrea and Colbert reveal they were both twins and McCrea states, “Of course, that’s another plot entirely,” hinting at the prologue. It ends with McCrea and Colbert remarrying and Vallee and Princess, happily marry their twins, slightly nervous. It seems there is no real explanation for either the intro or outro except to allow the scorned partners to end up with someone. These wraparounds involving their weddings could be a start of a new movie, or Sturges could be poking fun at conventions: films end with a wedding without showing the life that comes after “I do.” Or that fictitious romances are just a cycle of love and marriage and each one has it’s own plot and pratfalls. I like to think Sturges enjoyed a good joke. He was able to find humor in love, but social conventions suffered the the punchline.