While You Were Sleeping: RomCom is Not a Dirty Word 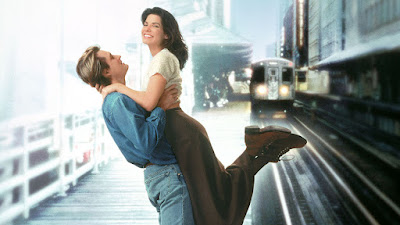 I hate the title “rom-coms" even though I use that word a lot. I joke about how much I love them, but it’s not really a joke. I truly, absolutely, adore them. This point is something I like to get across with any new movie friends. I sing their praises daily to an annoying degree.

Generally, rom-coms are seen as fluff. But some movies that we regard now as Hollywood classics like Sullivan’s Travels, His Girl Friday, and The Philadelphia Story are the first great romantic comedies, yet they don’t have the stigma of the “romantic comedy” attached to their reputation due to the era and their prestige.

A more basic explanation of why I have such a fondness for the genre is that they inspire me. These films give me hope, a real hope, that love does exist in this world. I see the hope in every obscene premise, every spark of chemistry and every final kiss. It’s not necessarily for myself to find a partner; it’s hope for the general outlook of the world. Everything cannot be so horrible if two people can fight all the odds to find each other, right? In order to keep my own sanity, I have to balance the “deep” movie viewing with some films that allow me to just smile. As a person who looks for the good in everybody, these movies give me ammo to keep that hope alive.

In this day and age, the rom-com feels like a silenced genre. There was a time when we had a new weekend release with a big name couple every weekend. Now they happen mostly on the indie front or with some serious celebrity backing. The best of these modern rom-coms come from the '80s to the late '90s. They range in quality, like any film genre, and everyone has their favorites. The one that I return to over and over again is While You Were Sleeping. 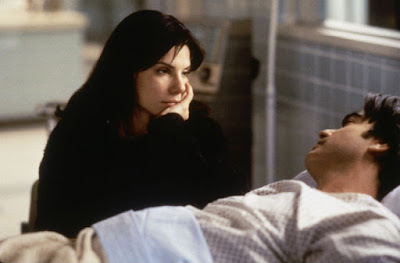 When you think of silly romantic comedy premises, this one takes the cake. Lucy (Sandra Bullock) is an “orphan” token fare collector for the Chicago Transit Authority who falls for a handsome man, Peter (Peter Gallagher), to whom she has never spoken. One day, he is mugged and pushed onto the tracks, where he loses consciousness, but she jumps onto the track to save him. (Don’t worry, it gets better.) She accompanies him to the hospital, where a nurse mistakes her for his fiancee so she can visit him in the “family only” ICU. His family comes to see him and the nurse blurts out to them that Lucy is his fiancee in all the chaos, and then deceit, mistaken identity, and love ensue.

Believe it or not, the movie really comes together after that. Sandra Bullock is never more charming than in this film. The intro to the film sets up that Lucy was raised by a single father who passed and she has basically become an orphan. This loneliness reads across Bullock’s face while Peter’s family exchanges Christmas presents. She wants nothing more than a family, which leads to her hesitation in telling them the truth. She knows it will break their hearts and she will lose them, so she allows for her selfishness to lead them on. Bullock’s general warmth and vulnerability around this family that immediately accepts her does a vast amount of the heavy lifting. The family is filled with wonderful character actors like Peter Boyle, Jack Warden and Glynis Johns. The way they interact with each other creates so much texture and history that you understand why Lucy would lie to be a part of it. Each actor works really hard in an effortless manner to make you really care for them. This, in turn, makes it very easy for you to understand why Lucy would care so much for them. 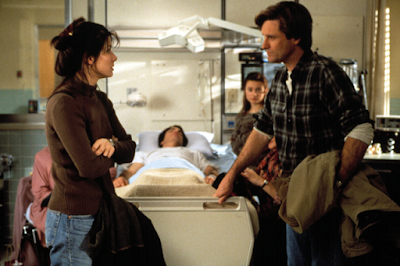 I doubt there can be spoilers for romantic comedies, but skip the next paragraph if you don’t want to know what happens. Bill Pullman enters as Peter’s brother, Jack, looking oh-so handsome and squinty in his best '90s high-waisted pants and plaid. While Peter is in a coma (or sleeping!!), Lucy falls for Jack. I think the reason I appreciate this movie is because the characters have time to have real conversations and actually fall for each other. There is a whole ten minute scene where the characters walk in the snow and interact with each other, the way real people do when they find connection and want to see where it goes. Bullock and Pullman’s chemistry is very strong, but in a more simmering fashion rather than fireworks. The first time they meet, Lucy is trying to sneak out of the house and Jack surprises her. They have a quick interaction where she explains she’s Peter’s “fiancee,” and within this these couple of minutes, they are both intrigued by each other. The attraction builds from there.

This film is also, ostensibly, a Christmas movie. Peter’s accident happens on Christmas Day and spans to right after New Year’s. I am someone who has their Christmas decorations up the day after Thanksgiving and is spending their New Year’s Eve watching the bottom of the barrel holiday specials. So right there, the film has me primed. Christmas is not really a "character’ in the movie." It simply is a fitting backdrop for a romance that leans a lot the family dynamic. The holiday season enhances Lucy’s need and desperation for family, and she gets one big family and love interest bundled up and delivered like a present under her tree.

For not being a thriller, this movie also builds some great tension. I really dislike movies in which characters don’t TALK TO EACH OTHER in order to solve simple problems that become giant crises, so I kind of can’t believe this movie works for me. They mention early on that Peter’s grandma Elsie (Glynis John’s) has a heart condition. If she found out Lucy was lying, she might actually die. It’s an acceptable real world consequence that I will believe enough to ride out the rest of the movie. It’s very hokey, but I think the reason it fits with the setup is because you can feel the earnestness. This film really wants you to believe that these characters love each other and would do anything for each other -- even lie and possibly say “no”to true love to keep others' happiness afloat. I think the rest of this film balances on your compassion for Lucy, the wonderful family dynamic, and your investment in Lucy and Jack’s relationship. 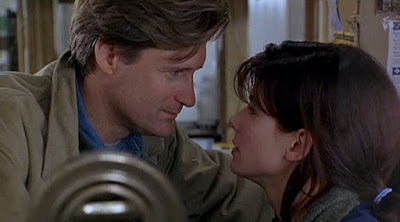 The ending half matters and half doesn’t for romantic comedies. You usually know they will end up together. But it’s usually the journey and the final kiss that closes the deal. This film swings for the fences and scores big time for me. My heart always swells during the last line. (It’s so good, I won’t spoil it for you). This is the feeling I look for in romantic comedies: that love exists even in the face of comas, amnesia and heart conditions. Hopefully we don’t all have to tackle those odds to find it.