Who Framed Roger Rabbit scared me as a kid. And as an adult, aspects of it are much, much worse.

I ran screaming down the hallway, my sister’s high-pitched cackle erupting behind me. The power she had to terrify me was as uncanny as it was simple. Using her thumb and index fingers, my sister would pull her eyes and the corners of her lips toward each other in a sickening smile. It wasn’t my sister’s face that sent me into panic—as she was a blonde haired, brown eyed seven-year old, but rather it was what her face symbolized, what that laugh conjured, that shook me awake at night. The inception of this imitation wasn’t from a horror film we happened to skip by while flipping through channels, nor was it anything we saw on the news, it was Christopher Lloyd’s horrific character Judge Doom in Who Framed Roger Rabbit that followed me for years. And it wasn’t until rewatching the movie that I realized it is terrifying, but not in the way that it scared me as a kid.

My childhood immediately preceded a softening of kid media. I don’t mean that in the “kids these days don’t know real cartoons” kind of way, but more to show that entertainment to the tune of Ren and Stimpy, Ah! Real Monsters, or Cow and Chicken would NEVER fly on today’s kids’ networks. I sometimes watch movies with my littlest sister (an 11-year old) and am overwhelmed by its sugary sweetness. I bet she has fewe nightmares than I ever did, but I got to see Poltergeist in elementary school because, hey, it’s got a PG rating. 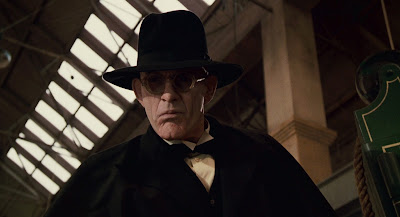 We all know that rating systems are insanely censorial in nature, often assigning higher ratings to content a bunch of old dudes in suits find unpalatable, but it does make you wonder about the tonal shift in children’s entertainment. If Who Framed Roger Rabbit had had a higher rating, would the image of Judge Doom’s face still haunt me to this day? Would an older, less eager imagination still have taken the spookiness of his visage and increased its fear factor exponentially? Would the movie hold up for me as a 25-year old? Who knows. But I’m happy to have had the opportunity to be horribly confused by this gem.

A strange venture from other Walt Disney Productions, Who Framed Roger Rabbit envisions a world where cartoons are slave-adjacent second class citizens navigating a culture that is less than unkind to them. In a brilliant combination of live action and animation, this late '80s film glues together two concepts that are the last things I would think could make such a rich plot: the growing disinterest toward classic animation and racism.

The late '80s was where conservatism thrived. Reagan was finishing up his second term and America was fully touting its first round of “Make America Great Again” ideology. After eight years of fervent race baiting and installing policies designed to harm Black communities and people of color, as well as actively ignore the genocidal effects of the AIDS virus, Reagan is credited with throwing gas on the bigoted embers of contemporary culture. A lot of his actions and precedents are still upheld today and clearly have a lasting effect on the current political and social climate. So what does any of this have to do with Who Framed Roger Rabbit? 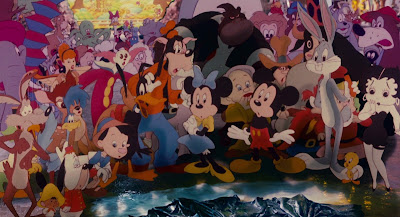 For those Disney nuts out there, I’m sorry to do this to you but most of the cartoon icons (Mickey Mouse, Goofy, Bugs Bunny…) have pretty racist roots. Many of the things we deem integral to cartoon character building—like the white gloves or Mickey Mouse’s, well...everything—were, in fact, big fat odes to Minstrel Shows, or racist depictions of black people performed by whites. And while many characters' fashion accessories are now considered benign, it’s part of our shitty history that reflected the shared values of the time. And now it’s especially hard to avoid the uncomfortable allegory whose oversized glove is punching us in the face.

Take the iconic scene where we first see Jessica Rabbit at The Ink and Paint Club. Similar to whites-only jazz clubs like Harlem’s Cotton Club, the only patrons allowed are human. Toons are welcome as performers, barkeeps, and waiters, but the lines remain clear. Toons are assumed to be so much based only on how they look, and aren’t given much room to explore their existence. Jessica even comments on it with her famous “I’m not bad, I’m just drawn that way.” It’s fucked up...but doesn’t it sound familiar?

Consider the dynamic between Roger and Eddie Valiant. We’ve seen this trope in film time and time again, jaded and/or bigoted cop finds themself in an unlikely partnership—with a person who represents everything they hate. Valiant has been reduced to a sad drunk after the murder of his brother. He resents all toons—a community he used to love and legally represent enthusiastically—for the action of one toon. By helping Roger, he gets to avenge his brother’s death and learns, hey toons aren’t that bad afterall! 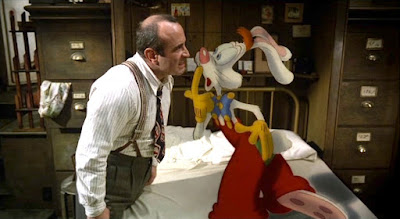 One stone, however, I’ve neglected to upturn until now because, admittedly, he still kind of gives me the chills. What the fuck is Judge Doom’s deal? He’s a toon who hates toons who disguises himself as a human so he can take over Toontown and kill all toons. I don’t really know the sociopolitical implication of his existence but he definitely makes for a good bad guy. He’s the figure that removes Toon Town from reality, the thing that erases the uncanny valley we’ve walked into and makes it all okay to enjoy and laugh without wondering from where the source material comes. He’s also the scariest villain ever and I will fight anyone who disagrees with me. He killed a little shoe! For no reason!

I’m not trying to push the idea that the movie is at all a 1:1 representation of racism or bigotry in the United States, because I get that that is kiiiind of a stretch and also flattens out a lot of the very real issues marginalized communities face in the US today. Rather, the world the movie sits in is a terrifying mess of prejudice that could be used to talk about many of the wrongs of the world, like any allegory really. Considering that movies are often a reflection of their time, and the film’s reliance on familiar, genre spanning tropes, I think it’s safe to say the clues are all painted (and animated) quite clearly before us.