11 Reasons You Should Watch Only the Strong 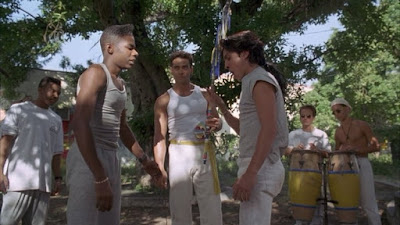 You need this in your life.

1. Only the Strong is co-written and directed by Sheldon Lettich of Bloodsport, Rambo III, Lionheart and Double Impact fame. He knows what he’s doing.

2. It stars Mark Dacascos, who is cut from marble’s marble. He’s sensitive, charming and ready for both action and love.

3. The film features one of the best soundtracks since West Side Story, with such classics as “Only the Strong,” “Only the Strong (Remix),” “Donovan’s Mix” (a techno-dance-capoeira mash-up that Chaybee would love),“Capoeira Song (Brazilian Village),” “Zoom-Zoom-Zoom,” (which would later go on to live in infamy in Mazda commercials) and especially “Paranaue,” which you’ll be humming to yourself all day because it’s played maybe thirty times throughout the movie. You won’t mind because it’s awesome. 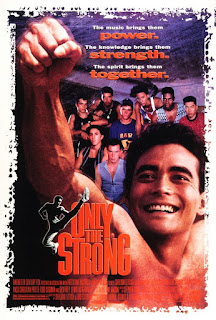 4. Only the Strong is the only Hollywood movie to showcase Capoeira as its central exploitation element. It’s an Afro-Brazilian dance fighting martial art. I know you’re chuckling, but once they start with the ginga (it all starts with the ginga), you’ll be dying to participate.

“If you only watch one movie for the rest of the year, make it Only the Strong” – Adam Riske, F This Movie!

5. It takes place at Lincoln High, the most dangerous high school ever dared put on screen. Don’t believe me? According to Geoffrey Lewis’ character, 75 percent of the students are packing (that’s three out of four), 45 percent are high and only 12 percent graduate. It’s the type of school where your class is interrupted if you’re lame/boring by someone exhibiting alpha status via a boom box volume increase. At one point, Dacascos tells a juvenile delinquent not to turn the music down, but instead to turn it up. He gets it and in that gesture the bad kids get that he gets it. Get it?

6. The film is super sincere. It will shatter your irony shield. It reminds me of an assembly I went to in high school where a Creole band played music. They asked for volunteers and, being kids, we snickered. Then I decided to raise my hand (because change starts with you…or me…mostly you, though) and I went on stage where they handed me a fish instrument called a Guiro and I played it jam band style (i.e. controlled reckless abandon) for multiple songs while the crowd roared with appreciation. That has little or nothing to do with Only the Strong, but I really wanted to tell that story. Because hubris. And sincerity.

7. Only the Strong features fight choreography by Bloodsport’s Frank Dux (like “put up your dukes”). So many people get kicked in the face.

8. The love interest is played by Stacey Travis – the same woman who wanted Jerry to try her grandmother’s mutton on an episode of Seinfeld. There’s a scene where Dacascos asks her if she can do a handstand (she can’t) but she then does a backbend. Then he does (get this) a backbend himself where their faces are right next to each other. As if that wasn’t baller enough, he moves the backbend into a flip to kiss and seals the deal. You’ll be, like, jack to pop. It’s the second hottest kiss after Spider-Man (2002).

“A movie that doesn’t ask for your support as much as earns your devotion.” – Adam Riske, F This Movie!

9. The film includes a legit amazing performance by Richard Coca as Orlando, one of the delinquents. It’s young Al Pacino good. You can tell he’s read the script, considered how his role plays part into the larger story and then focused on his personal beat work – by that I mean dialogue, motivation and Capoeira fighting. 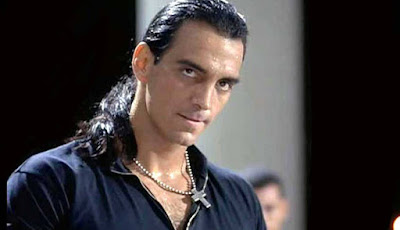 10. Only the Strong has the best villain in movie history – Silverio – played by Paco Christian Prieto. Silverio isn’t just the typical gangland boss. He also happens to be a Capoeira Mestre himself and doesn’t use his fighting for good like Santo Dacascos. Silverio was born and raised in the worst barrio in Rio de Janeiro. That’s the level of threat we’re dealing with.

11. Around the one-hour mark, the action escalates to a fever pitch when the capoeira begins to include machetes. Soon thereafter, we see capoeira vs. chainsaw and capoeira vs. blow torch action culminating in a showdown between Dacascos (now with a loyal crew of students) and a Jamaican-Brazilian street gang. The action and sound effects in this scene are so hard hitting you’ll swear you got fucked by an express train.