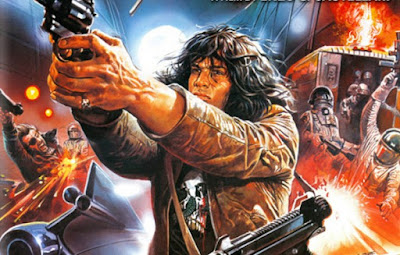 A pair of Italian rip-offs throw so much early '80s sci-fi action into a blender and the results are glorious.

I know have beaten this drum again and again on this site, but I'll say it again: the 1980s were the single greatest decade for genre movies in history. A few mainstream successes made horror, sci-fi and fantasy extremely popular and profitable both at the cinemas and on the burgeoning home video market, where a demand for new product allowed a lot of films to be made and find an audience. There were big-budget Hollywood genre movies being made, but then there were the indie knock-offs of those same movies being produced by the likes of Roger Corman and Charles Band’s Empire Pictures. Then a step even below that were the Italian entries, rip-offs of American genre pictures that didn’t mind being imitative and, in the process, boiled so many of their predecessors down to their most outrageous elements. It was a great time to be a movie fan.

Part Road Warrior, part Escape from New York, part The Warriors and all crazy, Enzo Castellari’s 1990: The Bronx Warriors is the first in a trilogy of post-apocalyptic action movies the director made between 1982 and 1983. It stars Marco Di Gregorio (aka “Mark Gregory”) as Trash, leader of the gang known as The Riders, one of a few gangs that rule the wasteland formerly known as The Bronx. When a young heiress named Anne (Stefania Girolami) escapes into the Bronx, Trash must take her under his wing and keep her safe. She stands to inherit the monolithic Manhattan Corporation and her father will do anything to get her back; that means sending in a mercenary called Hammer (Vic Morrow in his second-to-last role) to retrieve her and wipe out as many gang members in the Bronx as he’s able to. 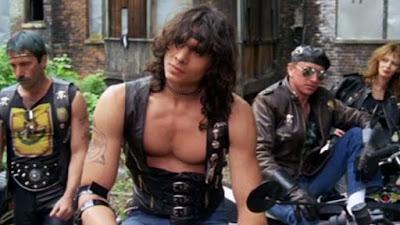 Because it’s basically a hybrid of a handful of other movies that came before it, 1990: The Bronx Warriors never bends over backwards to make a ton of sense. That’s ok. This isn’t that kind of movie. This is a movie that’s just about trying to provide the broad strokes of better movies, and, in doing so, gets rid of things like theme and characterization and replaces them with dumb, cartoonish action and a ridiculous vision of the future. Because Castellari is one of the better filmmakers to come out of the Italian exploitation movement, Bronx Warriors is cut together well and moves better than a lot of similar movies of the period, which were often comprised of mostly dead space with a few highlights. Bronx Warriors isn’t necessarily all highlights, but there’s not too much dead space, either. It’s entertaining from start to finish. Seeing as it’s basically a mash-up of several of my favorite movies, I can’t believe it’s taken me this long to write about 1990: The Bronx Warriors. It does not disappoint. Funneling John Carpenter, George Miller and Walter Hill through the lens of Italian exploitation — then adding Fred Williamson and a cackling, villainous Vic Morrow on top to boot — is a recipe for movie junk food heaven. Bring on Escape from the Bronx!

The sequel, released one year later as Escape from the Bronx (aka Bronx Warriors 2, aka Escape 2000 [not to be confused with Escape 2000, the American re-title of Brian Trenchard-Smith's Turkey Shoot]), is another bloody, derivative, dystopian effort from Castellari that doesn’t reach the same heights as its predecessor. But even though lighting doesn’t strike twice — assuming we’re willing to consider 1990: The Bronx Warriors as “lightning” (I am willing to consider it lightning) — the sequel is still a good deal of fun. Consider it a copy of a copy of a copy. 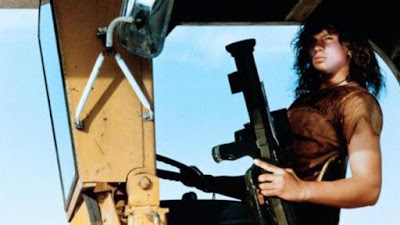 Taking place several years after the events of the first movie, Escape from the Bronx finds the New York city overrun with the poorest outcasts of society. Trash (Mark Gregory) is no longer leading a gang, but instead has become a loner just getting by in the Bronx. When the evil GC corporation wants to come in and tear the city down to rebuild it into the city of the future, they send in exterminators who carry blowtorches and light the citizens of the Bronx on fire at will. When his parents are among those murdered, Trash decides to fight back for his city, enlisting the help of the remaining gangs and a mercenary named Strike (played by Giancarlo Prete of The New Barbarians) to fight back against the corporate army and sadistic prison warden Wangler (Henry Silva, because he's the only thing this movie was missing).

Escape from the Bronx functions as both a sequel and a remake of the first movie, much the same way John Carpenter’s Escape from L.A. does for Escape from New York (the film from which this one is most obviously borrowing, down to its on-the-nose title). There is a kidnapping, only here it’s the president of the GC corporation instead of a young heiress. Henry Silva is playing the exact same role as Vic Morrow; they’re even dressed in the same costume. It all ends with an epic shootout filled with slow motion bodies falling off of things (Castellari loves his slow motion). The only thing missing is Fred Williamson. To be fair, that’s a pretty big hole to be filled. 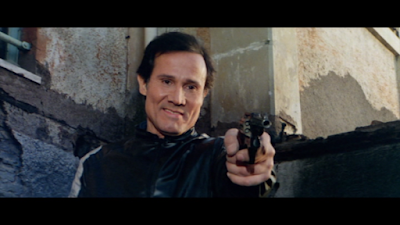 Mark Gregory continues to be unremarkable as Trash, the hero of the “Bronx” series. That’s not entirely his fault, as according to the supplements on this disc he was learning his lines in English when showing up to set each day. He’s stiff and kind of dull but looks cool enough in the part; besides, it doesn’t matter when he’s surrounded by so many colorful characters and performances, including Silva, Antonio Sabato and Prete. Everyone seems to be trying to out-crazy each other (one highlight involves Silva freaking out about how much he hates sugar), and Castellari manages to out-crazy all of them. The chaos and carnage he creates in the final act of Escape from the Bronx is the biggest set piece in any of the three post-apocalyptic films he made in the early ‘80s (these two and The New Barbarians). Though this movie had a lower budget than the others -- and often feels like it -- Castellari goes from broke in the finale as gangs and soldiers wipe each other out by the dozens.

While Escape from the Bronx isn’t quite as strong a movie as 1990: The Bronx Warriors or The New Barbarians, it’s still a worthy entry in the canon of early ‘80s cult action. As someone who has watched a lot of exploitation movies this month, this one still stands out for its energy, its stunts and its body count. I won’t say I’m tremendously disappointed that there was never a third “Bronx” movie -- I don’t think there was much gas left in this particular tank -- but I know I’ll be coming back to Castellari’s post-apocalypse trilogy again and again…even if The New Barbarians has nothing to do with these other two.