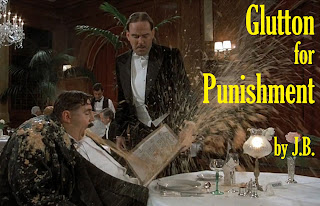 We are all interested in bad movies, inexcusable cinema, and objects seemingly shooting from the screen into our laps, for that is the stuff we use to fill the empty spaces… in our laps. You are interested in the moist, the sodden, and the submerged; that is why you are here. And now, for the first time, we are bringing to you the full story of a lazy group of adventurers. We are bringing you all the evidence, based only on the secret testimony of the miserable soul who survived a screening. I am that miserable soul. The sweaty Mediterranean locations, the confused performances, the old-timey misogyny—my friend, we cannot keep these a secret any longer. Let us punish the guilty. Let us reward the innocent. Remember, my friends: terrible movies such as these will affect you in the future!

September Storm is at once a gimmicky 3-D exploitation film, a travelogue, a romance, and the laziest of adventure movies. It bears witness to the end of the 3-D era (era). It features beautiful locations, but a boring story; excellent 3-D effects, but a cast of actors all convinced that they are in different films. In a word, September Storm is like a Fig Newton. Nobody likes you, Newton. We’re all here for that sweet, delicious Fig.

The Plot In Brief: Lovable rogue Manuel (Asher Dann) babysits luxury yachts for rich men somewhere off the scenic Mediterranean coast. He often woos young women by claiming the yachts are actually his. He is able to fool disillusioned fashion model Anne Traymore (Joanne Dru) into falling for his dubious charms. Anne is on vacation, trying to escape the laugh-in-the-face-of-death hurley-burley of New York’s cutthroat modeling scene. The two begin “diving” together.

Meanwhile, lazy adventurer Joe Balfour (Mark Stevens) and his skeevy “Man Friday” Ernie Williams (Robert Strauss) hatch a plan to retrieve millions in gold doubloons from the hull of a nearby sunken boat. Problem is, they need a special tricked-out yacht to perform the proposed doubloon-ectomy. Can Joe and Ernie talk Manuel and Anne into joining their slow-moving caper? Can Ernie keep his hands off Anne? What of the flustered millionaire who actually owns Manuel’s yacht? These and other questions are answered, eventually, in September Storm.

I have to single out Byron Haskin for his direction. Though the narrative lacks pace, urgency, stakes, or common sense, Haskin is smart enough to place enough inanimate objects in the foreground of each shot to really sell the 3-D. This should come as no surprise, as Haskin had earlier directed the terrific 1953 War of the Worlds. While WotW was not in 3-D, the film features innumerable interesting and dense shot compositions, taking full advantage of the depth of the frame.

As if compelled by some obscure “truth in advertising” law, September Storm does feature a storm at sea sequence, with obvious miniature work and some cool 3-D effects. The trouble is, like much of this meandering, bloated film, the storm sequence drags on and on, so that the audience suffers along with the cast not from the storm’s ferocity, but from its sheer duration. It rains so much and for so long, I kept expecting to see Noah’s Ark drift by in the background.

I am surprised that W.R. Burnett penned this script; his previous credits belie this lazy, plodding narrative. Burnett wrote the dialogue for the 1932 Scarface, the source novel and screenplay of High Sierra, and the screenplays for This Gun For Hire and The Great Escape! Perhaps the difference is that Scarface, High Sierra, This Gun for Hire, and The Great Escape featured riveting, charismatic performances from Paul Muni, Humphrey Bogart, Alan Ladd, and Steve McQueen, respectively. All September Storm has is a boring, distracted, Mark Stevens. If you could put white actors in a box and sell them in the generic food aisle at the Dollar Store, the box would be labeled MARK STEVENS. His favorite color is “plain.” His favorite flavor is “beige.”

In September Storm, Joanne Dru is convinced the film is really about her character’s existential quandary about modeling. It is not. Asher Dann believes his character is a roguish hero. He is not. Robert Strauss is stuck in an actor’s nightmare, asked to simultaneously play the film’s villain AND its comic relief. That crazy Ernie, sometimes he just gets so rapey!

Yet the film’s ultimate confusion lies in the casting of Mark Stevens in what is clearly supposed to be an Indiana Jones part. The character of Joe Balfour on the page is tricky and charming and cool and smart. Stevens’s performance is so lazy, tone deaf, and dispirited, that it sinks the film under its immoveable weight. Joe Balfour reminds me of that one boozy, washed-up friend all of our Dads had in the 1960s… you called him “Uncle Jerry” or whatever, but secretly always wondered why the hell your father hung out with him, especially after the guy’s fourth divorce. Mark Stevens is clearly going for a Bogart-like affect of cool remove; the effect is that he should be removed from the film. September Storm is barely over one hour and a half. Thanks to Mark Stevens, it feels like three. 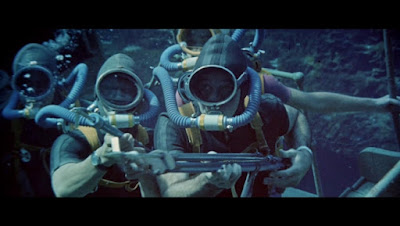 Still, I am happy that September Storm has been rescued and restored. Ron Furmanek and his 3-D Archive are doing amazing, important work, rescuing these films from oblivion and enabling us to see them as they were originally exhibited. This film was the subject of a Kickstarter campaign that got a lot of press, raising money for the film’s 3-D restoration. Bravo to all who contributed. Your names are listed at the end of the credits! Perhaps more money can be raised so that with advanced CGI technology, we can replace Stevens’s performance with something more like Bogey—or even a reasonably charismatic trained collie. (I’m thinking of Jumpy from In a Valley of Violence. That dog was terrific!)

BONUS ALERT: The KINO disc includes many wonderful extras, including the film’s original 3-D trailer and the 3-D short shown with September Storm in its early 3-D play dates. We also get an interview with a now considerably older Asher Dann, in which he opines on his never-quite-happened career as a screen heartthrob. He eventually drifted into real estate. He was cast in September Storm because he knew how to play gin rummy. This bonus feature is, needless to say, essential viewing.

My friend, you have now read this column, based on my own sworn testimony. Can you prove that this film doesn’t exist? Perhaps on your way home, someone will pass you in the dark, and you will never know it, but he will have a scheme for removing all the gold doubloons from the sunken hull of your secret schooner. Don’t fall for it! We once laughed at young men pretending to own yachts, easily impressed models, international maritime law, and vaccinations. So much laughter! And now some of us laugh at very bad movies (or in this case, pretty good 3-D movies.) God help us in the future.