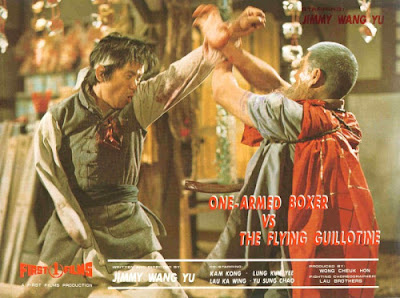 Ready to rip your head right off!

Wang plays a one armed warrior who has established a martial arts school in town, but whose life is in danger from a blind assassin who wants revenge against Wang for killing two of his disciples. The blind assassin, who is the master in the movie’s title, wields a flying guillotine: a bowl-shaped, bladed contraption at the end of a chain intended to be thrown over a victim’s head, wherein the guillotine’s jaws shut, and a simple jerk of the chain cuts the head clean off. Despite the assassin’s blindness, his kung fu skills compensate for this with an unerring aim and extraordinary hearing, with which he dispatches every one armed man he encounters, which is way more than you’d think.
Wang, in the meantime, is a spectator at a local martial arts tournament, which he has refused to enter but desires to have his students learn from the experience. Their educational experience goes somewhat awry when the blind assassin appears, throwing the tournament into chaos as he hunts for the one armed warrior. Various martial artists discover the blind assassin’s motives, and look to profit over turning over Wang to his enemy, and the troubles ensue.

Wang has clearly hit a comfortable spot in his “one armed” characters, such as the warrior he plays in these One Armed Boxer movies and the One Armed Swordsman he plays in others. And while I definitely appreciate the Junesploitation-ey appeal of a one armed fighter, I’m not sure if the action is necessarily any better for it. Just to compare, usually when a fighter has some sort of obvious handicap, he has a countermove or ability which makes up for his deficiency, like the blind assassin’s keen hearing. Wang’s one armed warrior doesn’t have any obvious visible sign of something that compensates for his one-armedness; he does have a powerful punch, but it’s unclear when his punch is more powerful from one moment to another, nor is he more powerful than his opponents. He isn’t quicker, and since he’s doing everything with one arm, he’s got to work twice as hard as his opponents to keep up. The real time fights (no speed ramping) also don’t help the illusion that Wang is fighting a little slower than the others because of his hindrance. Again, it’s an extremely impressive physical feat from the actor, but your mileage might vary on how much it makes the action better or more interesting. I would argue that the blind assassin, with his diabolical weapon and his singular mission of revenge, is a more charismatic presence on screen, and maybe why the movie was re-titled to feature him.
What sets the one armed warrior apart from his seemingly more impressive enemy or from other martial arts heroes isn’t his physical prowess, but his mental acuity. He’s smart enough to outwit his powerful opponent, and the series of traps and lures he uses to bait his enemies somewhat subverts the trope of the isolated, bulletproof lone wolf martial artist. Wang engages the help of the town and his students to help defeat the assassin, acting as the hero who wishes to stay unnoticed, avoiding the desire to dominate or conquer people. I think this slightly unconventional hero points to Wang’s strengths as a filmmaker, and creating new ways for the one armed underdog to overcome a horde of more powerful antagonists.

Which isn’t to say that there are no preposterous moments. This isn’t the first tournament movie (King Boxer was in 1972, Enter the Dragon in 1973, to name a few) but this is probably the first that definitely tries to include a lot of different Asian peoples. You got your Japanese samurai, your Thai Boxer, your female fighter, a Mongol fighter, and a Chinese guy dressed as an Indian guy (to be fair, all the actors are Chinese or Taiwanese). The “Indian” fighter is a yoga expert, if by yoga you mean the ability to extend one’s arms to twenty feet.
The fun doesn’t stop there, though. I love, love, love the kicking Krautrock soundtrack that most notably surfaces in the credits, and that Quentin Tarantino paid homage to on the soundtrack for Kill Bill. Go listen to NEU!’s “Super 16” and “Super” right this second for the opening credits. Who knew that Krautrock and kung fu would be perfect together? It’s like a little gift that Jimmy Wang Yu and Junespoitation and the '70s got together to make just for us.

POSTSCRIPT - I watched the movie on Amazon Prime’s streaming service, and the English dubbing and subtitles cut out intermittently, anywhere from two minutes to five minutes at a time. Not sure if the DVD is this way, but fair warning.