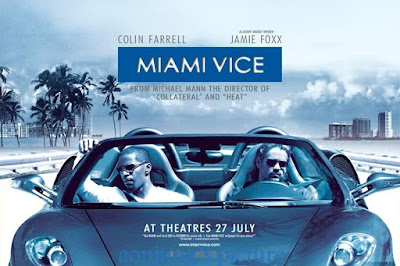 I have been singing the praises of Michael Mann's 2006 cop movie Miami Vice -- a big-screen adaptation of his own watershed '80s TV drama -- for many years on this site. More than once, readers have requested that I write something about my love for the film, which is polarizing but which has gained greater appreciation in the critical community in the decade since its release. Each time I have shied away, intimidated by the film and by my own fear of articulating just what it is I love about it. But today is Cops day for #Junesploitation and it's time to face my fears. It's time to talk about my love for Miami Vice.

I won't bury the lede. Miami Vice is the definitive cop movie masterpiece of the 2000s. I didn't think so the first time I saw it in theaters back in '06. I liked the film but had to sit with it, to make sense of its framing, the spareness of its story coupled with the abundance of its exposition, of Mann's use of grainy digital video to shoot the city at night -- an extension of what he had begun in Collateral but even more avant garde this time out. It's a movie I had to live with before I was able to recognize its greatness. Now it's one of my favorites of the 2000s and a movie I revisit once or twice a year. Just as he revolutionized the look of cop dramas and action movies back with the original series in the 1980s, Mann creates a new action aesthetic with the feature adaptation. It's no less revolutionary, only this time no one else followed suit. It's hard to call something revolutionary when there's no revolution, but here we are. 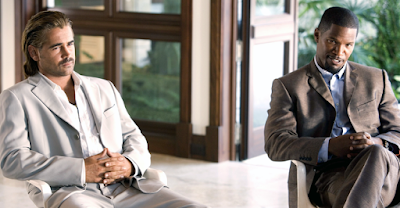 Jamie Foxx and Colin Farrell, all long greasy hair and gross mustache, play Ricardo Tubbs and Sonny Crockett, undercover Miami cops on the trail of some major drug operations. When a job goes bad and the pair learn of the possibility of a leak in their department, they are assigned to a special joint task force to bring down Columbian drug kingpin using a gang of white supremacists to distribute drugs across South Florida. Going deep undercover to strike a deal with José Yero (John Ortiz, cast effectively against type), they pose as smugglers and eventually come into contact with Isabella (Gong Li), the financial advisor to and girlfriend of drug lord Arcangel de Jesus Montoya. As Isabella and Crockett begin a secret relationship, he and Tubbs get closer and closer to danger as a series of threats puts their lives and the lives of their team in terrible danger.

Don't bother trying to make sense of the all the plot details in Miami Vice. On the one hand, they don't matter. This is a movie about tone. About creating a world that feels dangerous and lonely and sad because there is only The Job. Mann borrows from some of Jean-Pierre Melville's crime classics of the 1960s -- movies like Bob le Flambeur and Le Samourai -- in his approach to story, which is to say that Miami Vice is less what it's about and more how it is about it. On the other hand, the plot is everything, as Mann plunges us way fucking deep into a world of cop and criminal speak, not giving a shit if we fall behind or get lost. Nowhere is this more true than in the theatrical cut, which opens in the middle of a nightclub as the cops work the room. We are literally dropped right into the middle of a job, and the effect is as thrilling as it is disorienting. I love this opening so much that it's the reason a big part of me prefers the theatrical cut to the longer "director's cut" that Mann put out on DVD and Blu-ray, which still includes the nightclub scene but pads the opening with a long sequence of Go Fast boats preceding it, dulling the impact. I love that original opening so much it even makes me somewhat affectionate towards a Linkin Park song. That's what this movie does to me. 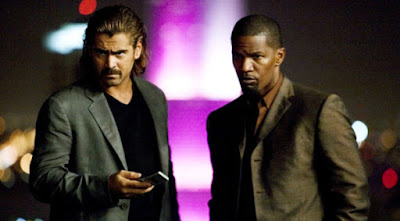 While I don't know that Mann's reliance on digital filmmaking has suited every project post-Collateral, I do think it works beautifully in Miami Vice. Though he started out in Chicago and made one of the best Chicago movies ever in Thief, Mann eventually became known as an L.A. filmmaker for how vibrant and unique he made that city feel on film. He does the same for Miami here, capturing the neon glow of the night skies (amplified to an even greater degree of near-abstract beauty thanks to the low light conditions under which he's able to shoot) and the impossible, immediate beauty of the ocean during one of my favorite scenes in the movie. More on that in a second. By unlocking his camera and affording it free reign to roam around, holding the actors in closeup and finding angles that feel fresh and spare, Mann is essentially rewriting the language of the action movie in Miami Vice. This may be why it is still rejected by such a large portion of film fans -- it neither looks nor feels like anything else in a genre that depends a great deal on familiarity. But the story may also prove unsatisfying for many, eschewing traditional dramatic beats and structure as it does.

With the exception of one terrible slow-motion explosion late in the film, the action in Miami Vice is the best Mann has staged since Heat. The shootouts that take place during the movie's climax can't touch the scope of that movie nor the kineticism of Collateral, but there is a brilliance to the way Mann creates chaotic situations and then finds order in how to present them -- a reflection of the way these cops perceive all the possible angles in a dangerous confrontation and then respond with clear-headed calculation. Once again, professionalism is the order of the day, and while it is heightened for cinematic purposes there is something that feels almost realistic about the way Mann stages his shootouts. 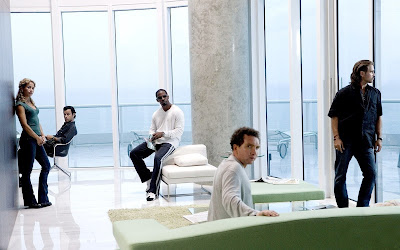 I haven't even touched on the movie's casting yet. Foxx is dependable as Tubbs, mostly called upon to be cool and professional, which he does; his relationship with fellow cop Naomie Harris has a couple of nice beats, in particular an intimate moment where they make each other laugh that tells us more about their romance in a few seconds than most entries in the genre can do in their entire running time. Farrell is a bit harder to wrap one's head around, in part because he's taking over the role made famous by Don Johnson, who became the poster child for '80s cool with his pastel shirts and sun-bleached California handsomeness. Ferrell looks more like a skeezy porn producer, overly enunciating all of his words (in David Mamet fashion, the characters here rarely use contractions) with a gruff delivery that feels, at times, too much like a mannered actor's choice. Now that I've grown accustomed to his interpretation of the character, though, I can appreciate the bruised soul that exists beneath. His work as Sonny Crockett is profoundly sad, and it is that sadness that makes up the heart of Miami Vice.

The doomed relationship he shares with Gong Li, possibly out of her depth in one of her first English language performances, gets right to what always made the '80s incarnation of Miami Vice such compelling television. Many stories about undercover cops focus on the lies and inevitable betrayal between the cop and the civilian/criminal. In this, Miami Vice is not different. What is different here is that neither Sonny nor Isabella are fooling themselves from the outset, not because she knows he is a cop but because she knows that their business won't allow the luxury of finding love. She is already in a relationship -- albeit a loveless one -- with a criminal, though she's less a romantic partner than an employee. There is an immediate understanding that their romance can only have a sad ending, which is what makes their first "date" so achingly gorgeous. Sonny and Isabella take one their Go Fast boats to Cuba to drink Mojitos (Crockett is a fiend for Mojitos). They ride in silence as Moby's "One of These Mornings" plays on the soundtrack for considerably longer than most filmmakers would be comfortable letting it play, but Mann understands that we are witnessing both the beginning and the end of this romance in a single scene. Even the song predicts the eventual dissolution of the romance, the wailing vocal both beautiful and devastating. It's one of my favorite scenes in the movie. Hell, it's one of my favorite scenes in most movies. 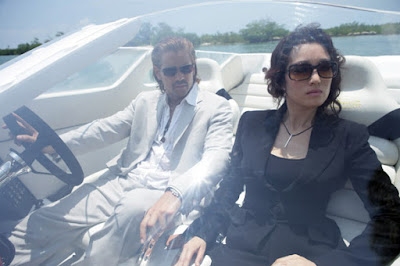 Being a Michael Mann movie, even the smallest of roles is cast with great actors who show up for the span of a single scene and make the film better for just a few minutes. John Hawkes gets a memorable moment early on. Ciarán Hinds plays the FBI agent who pulls Crockett and Tubbs into the loop on the job. Tom Towles shows up as a white supremacist. Eddie Marsan gets a few scenes as an informant. Besides Naomie Harris, the rest of Crockett and Tubbs team is comprised of Dominic Lombardozzi (Herc!), Elizabeth Rodriguez and Justin Theroux, all playing characters who originally appeared on the series. They don't get any kind of separate story arc here, but lend the movie an even greater sense of professionalism. They are The Job, and The Job is what matters.

That the movie works at all, much less as well as it does, is a miracle. The production was a disaster. There are stories to be read about it all over the internet, easily discovered through a Google search, so I won't spend much time on them here. Colin Farrell was in the throes of some major substance abuse problems. A series of hurricanes delayed the production and contributed to budget overruns to the point of a final cost reported to be in the neighborhood of $150 million. Jamie Foxx refused to return to the Dominican Republic after filming was underway, forcing Mann to rewrite the movie's last act in the middle of production and scrap all of his original plans, even leading to a change in the main villain. This was not an easy movie to make. Part of me suspects it actually broke something in Michael Mann, who has directed only Public Enemies and Blackhat, arguably his two weakest films (though I like Blackhat), since this one. Some of his experimental tendencies have continued,  but the assuredness of both his storytelling and tone have become shakier. I'm not sure we'll get this Michael Mann back. I hope we will. 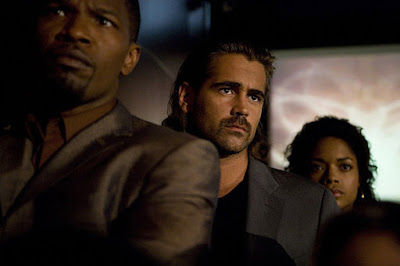 The years have been good to Miami Vice, with critics and film fans alike reassessing the movie and recognizing it as a masterpiece on the level of previous Mann efforts like Thief, Manhunter and The Insider. It destroys nearly every other big-screen TV adaptation by totally reinventing the material while retaining the core of what the show was. Miami Vice was such a pop culture phenomenon that we tend to remember it as a weekly music video showcasing cool clothes, but it was a dark and melancholy series about the loneliness of devoting oneself to The Job and having to live multiple identities. The movie gets all that right. It's so easy to imagine a bad Miami Vice movie that's only interested in playing up the retro aspects, so I admire and appreciate just how determined Michael Mann is to bring his property firmly into the 2000s. In the throwback age of The Expendables, Miami Vice is an action movie that feels truly modern. It's rewarding to see so many people now catching up to what I have been shouting for years. This is a great film.