No Apologies: Die Hard With a Vengeance 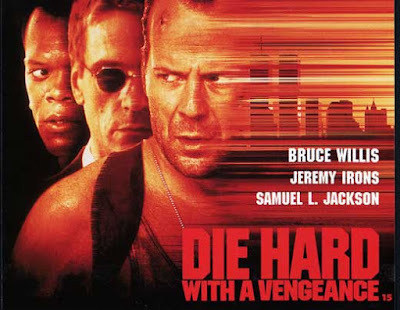 Nothing beats Die Hard, and it’s very unlikely that anything ever will. It’s a stone-cold genius action premise paired with a lead performance that changed the very nature of the Hero Cop archetype forever. It is a perfect movie. It cannot be replicated. These are facts. However, since movie studios use money to buy things (and Bruce Willis presumably uses it to fill the ever-growing gap in his aching soul), the birth and relentless continuation of the Die Hard cinematic universe was a foregone conclusion. Each film pits Detective John McClane against an escalating series of insane tasks, gradually transforming him from “guy in the wrong place at the wrong time” all the way into “superhero who throws cars at helicopters.” Not a single one of the sequels works in its entirety (“Die Hard in a ____” variants like Speed usually have more success), but they almost always try something different. Grading on that scale — and again, with a heavy, heavy curve — the best of the sequels is easily 1995’s Die Hard with a Vengeance, the entry that first took McClane out of hallways and air vents and into the open world. 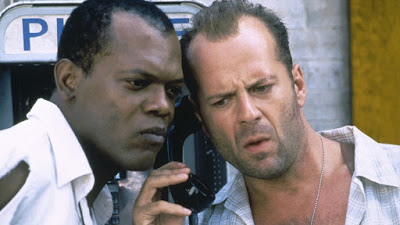 While Die Hard 2 introduces a penitent and well-adjusted John McClane repairing his marriage and settling back into family life, Vengeance kicks him back to the curb and gives him possibly the best introduction of any hero short of Indiana Jones: hungover and blabbering in the back of a van. There’s a wonderful irony to McClane’s continued fuck-uppery, proof that one’s ability to get the bad guy doesn’t make one any less of a jackass. He may have saved hundreds of people at Nakatomi Plaza, but he didn’t learn anything about himself. And sure, the “call Holly” story thread is pretty half-baked, but it does tie together with the larger theme of unfinished business presented by Jeremy Irons’ villain, Simon Gruber. Vengeance also gives us an opportunity to see how John (mal)functions more directly with other cops — characters like The Chief (Larry Bryggman) and The Squad (Graham Greene, Colleen Camp) rag on him mercilessly. It’s cool to see McClane’s peers give him shit and refuse to cut him any slack. This broken and vulnerable version of the character is far more interesting than the detached Man of Steel he becomes later on.

Also interesting is Samuel L. Jackson as “Good Samaritan” Zeus, the Harlem shopkeeper who saves John from some hoods and becomes an unwilling participant in his game of Simon Says. Samuel L. is doing his Samuel L. thing, for sure, but a reputable and competent adult is a nice foil to John’s aforementioned tendency toward fuck-uppery. He’s a capable badass and a responsible uncle who teaches his nephews not to rely on anyone (to be little Die Hards, if you will), and to be wary of The Man. Zeus is hesitant to get involved in white problems (rightfully so; there’s an unintentionally horrifying scene in which a white cop pulls a gun on him just for yelling at a guy at a payphone), but his racially-charged banter with John (and their resulting cooperation) is a ‘90s-era (era) commentary on the issues of the day. Vengeance’s “New Yorkness” is an important element (you might say that New York is…ugh…a character in the film), and pairing together two metropolitan working stiffs from opposite sides of the tracks is a nice addition to the overall dynamic.

Speaking of which, the open sandbox nature of this particular Die Hard entry might be sacrilegious to those in the audience who prefer the one-man-against-one-hundred approach of the first two films. Knowing that the original spec script Simon Says was first converted into a Lethal Weapon sequel before being repurposed with Die Hard characters makes the whole thing feel even more cynical and impersonal, and some might argue that taking the buddy cop approach invalidates this as a Die Hard story entirely. That’s fair, and it’s true that Vengeance is more generally a good action movie than specifically a good Die Hard movie. But it’s a very good action movie, a tightly-paced and inventive story with legitimately interesting challenges for John McClane’s considerable skill set. After two films as an outsider relying solely on his wits, he’s finally able to romp around his home turf, using an ambulance to cut through traffic and leaping with reckless abandon into the Long Island Sound. Sure, there are some logical leaps (How did they get exactly two gallons of water? Why do they compare a random driver to Hillary Clinton?), but it all hangs together fairly well.

It’s not perfect, of course. McClane is on his back foot for far too much of the running time, reacting to events rather than influencing them. He’s not really a fly in Simon’s ointment until the last third of the film, and by then it doesn’t seem to matter. The bad guy is basically hoisted by his own petard through his reckless generosity with an aspirin bottle. It’s kind of lame, honestly. It’s also worth noting that Simon’s Heavy (Nick Wyman) warns him several times that setting up needlessly elaborate traps for McClane to fall into is actually a gigantic distraction from the real mission at hand. It’s supposed to read as a callback to the first film, in which Hans uses a righteous cause as a smokescreen for a simple robbery, but it’s hand-waved away so late in the game that it loses any resonance. He doesn’t even seem to care about getting revenge for his brother’s death, referring to it as a “bonus.” It begs the question: does anyone involved with the Die Hard series truly understand what made Hans Gruber such a great villain? It wasn’t just that he was charming and German. He was a mastermind. 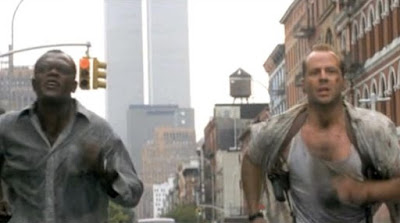 So, no. Die Hard with a Vengeance is not necessarily a great movie. It’s a Saturday afternoon cable movie, something to pass time between commercials. It doesn’t hold a candle to the original and pretty much falls apart as it approaches the finish line. Some would consider that a failure. But risks were taken. Money was spent. Jeremy Irons eats a hard-boiled egg and somehow makes it erotic. Die Hard should never have had one sequel, let alone four (and counting), and that two of them are even halfway watchable is a considerable achievement. At the very least, Die Hard with a Vengeance deserves a better reputation than it currently enjoys because it’s the only one in which a dude gets sliced in half at the waist by a suspension cable. If you need more than that, I’m not sure I want to know you.