Off the Shelf: Wolf Guy (Blu-ray) 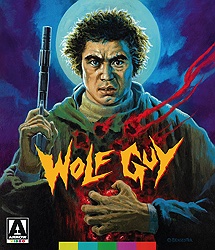 Sometimes, you're lucky enough to see a movie that isn't like any other movie you've seen. Wolf Guy is that movie.

God bless Arrow Video, for without them I might not have ever seen Wolf Guy. Never before released outside of Japan, this rare 1975 Toei production is part horror, part martial arts movie, part science fiction fantasy, part action movie, part blood-soaked gore fest. In short, it's the kind of movie for which #Junesploitation is made.

The great Sonny Chiba stars as Akira Inugami, the only surviving member of an ancient clan of werewolves who also happens to solve crimes. I think? He never really wolfs out, so don't expect any full-on werewolf action. He does fight a bunch and at one point is captured and experimented upon, during which we get to see him eviscerated and disemboweled in graphic detail. Also, there is a series of unexplainable crimes in which the members of a rock band are being attacked by an invisible tiger and shredded alive. To round things out, there's some political intrigue and a romance that culminates in Chiba essentially breastfeeding from his would-be girlfriend. 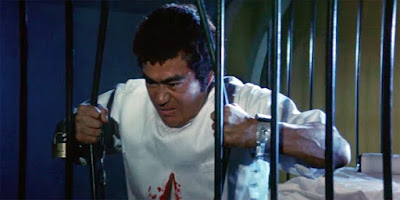 Here's the thing: despite my love for crazy movies, I have a pretty low tolerance for total nonsense. I will tolerate a good deal of weirdness so long as I feel like the filmmaker is in control and I'm not watching something that's weird just for the sake of being weird, which is what turns me off to a lot of contemporary cult cinema that comes out of Japan. So while the "plot" description I wrote for Wolf Guy sounds like a lot of stream-of-consciousness bullshit, it all sort of makes sense in the context of the movie. I mean, it doesn't make sense at all, but director Kazuhiko Yamaguchi creates a landscape in which everything adds up and seems possible. The film is adapted from a manga series by Kazumasa Hirai, which I have not read but might speculate provides a format that allows for longer, more developed exposition in terms of some of the backstory. The movie has to function in broader strokes, meaning we're asked to accept the idea of an invisible spirit tiger that kills people without ever really being shown a world in which such a thing is commonplace. Somehow it works. Even if I didn't always know exactly why certain things were happening, I was never less than fully on board with all of it.

From the acid jazzy score to the enormous sprays of blood that gush from every wound to the endless cool of star Sonny Chiba, Wolf Guy is so watchably weird that I found myself loving it. It's a movie made up of so many elements that I enjoy in other movies -- the werewolf horror, the violent action, the crime aspects -- that to see them combined in a totally new way is a thrill, like someone rearranging all the pieces of a cat jigsaw puzzle to make a really fucked-up looking cat that somehow looks even better than the one you were supposed to be making. I know that it's never going to appeal to a lot of people, because they probably want the cat to look like it does on the box. That's ok! There are plenty of movies like that. There is only one Wolf Guy. 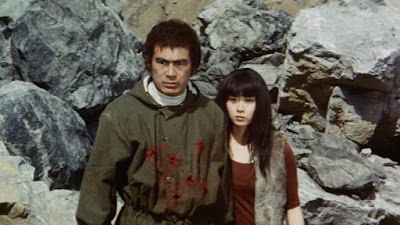 Arrow rescues the movie from obscurity with a combination Blu-ray/DVD set that offers an HD master provided by Toei, which is sometimes soft in that '70s way but also colorful and vibrant. While light on extras, there are some good interviews with Sonny Chiba and the movie's director and producer, providing some fun context for the film and a good overview of Chiba's career as an action star (Side gripe: how is there still not a decent-looking widescreen release of The Street Fighter on DVD or Blu-ray?). There doesn't need to be a lot of special features on this release, however, because the fact that we're getting a Blu-ray of it at all is a special feature.

So, yes, I'm fully in the tank for Wolf Guy, and not in an ironic hipster can-you-believe-this kind of way. The movie is sincere, and so is my affection for it. Any movie that has Sonny Chiba AND werewolves AND this much blood is bound to win my heart. You don't have to watch it during #Junesploitation this month, but you really should watch it at some point.