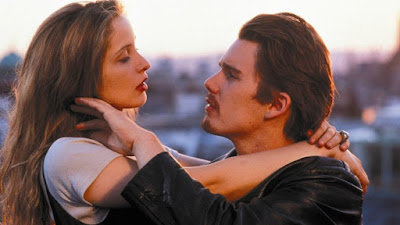 We all have hearts. They may be at different capacities of acceptance and giving back, but they are there feeling a thousand emotions a day for you. But the strongest one is love. It is a biological reaction at its core, though we feel it as more than that “procreational instinct.” So what is this biological reaction we are looking for?

I am not a scientist. I am barely a writer. But I do know we look for love with someone else to create our own love story, like the ones we know and have heard a million times. How your grandma and grandpa met at the ice cream parlor and they both knew they would never leave each other’s side. How your mom hated your dad when they first met but now they have been married for 30 years and still find a way to steal kisses.

Can you tell I’m a bit romantic? Well, actually, I’m a cynic disguised as a romantic. Give me a romantic comedy everyday and I will be a content woman. When it comes to “real” loves stories, I kind of cringe. The reality is almost too much for me to handle as an empathetic person. The feelings I feel make my mind and heart work on overdrive. It’s a part of the reason I put off watching the Before Trilogy by Richard Linklater. I knew I would love it and it would crush me. I reached a point last week, getting ready for a month of fun and silliness that is Junesploitation, where I needed a palate cleanser -- something to settle my mind and get me ready for all the craziness I was going to experience. I found the Before series streaming on Amazon and I figured it would be perfect: romance, dreaminess, and Europe seemed like exactly what I needed. So I watched Before Sunrise. It made me nostalgic and the whimsy took me away to a happy place of poetic speak and the aforementioned sunrises. The next night, I put on Before Sunset and that was it. It crushed me. It pounded my heart so epically that I don’t know if I can watch Before Midnight. I haven’t had the ability to press play on the last movie of the series yet.

The idea that Linklater creates in Before Sunrise is so simple that its simplicity translates across all lines. Two people meet on a train and their connection is so strong that one night is enough to bond them in love. This is “the” love story, the one we all have heard of, wish to have or are lucky enough to experience. The odds all stack up on either side to create a situation where there is no way to escape the moment. That’s what Linklater captures so wonderfully. The big step seemed to be casting two people you could believe would fall in love with each other in one night. Ethan Hawke and Julie Delpy, as Jesse and Celine, are those people. I could see myself falling for either of them: Hawke in his rough charm yet keen mind and, lest we forget, the scruffy beard, while Delpy is enigmatic in every way without needing to try at all. She is exactly what we see on the screen, and that person who is everything we ever wanted or wanted to be. 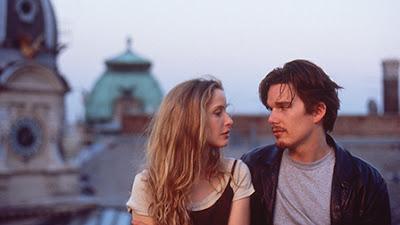 The moment that really sticks out in Before Sunrise is this statement that Celine makes: “I believe if there's any kind of God, it wouldn't be in any of us, not you or me, but just this little space in between. If there's any kind of magic in this world, it must be in the attempt of understanding someone sharing something. I know, it's almost impossible to succeed but who cares really? The answer must be in the attempt.” There is so much earnestness in this small statement. The term “earnest” is the most important here, when everything has to be believable for the spell to transfix the audience. This statement is deep without pretension, full without being bloated, and just crazy enough to be persuasive. It's the way she says it, with the small movement of her hands and the eye contact she makes with Hawke. It’s the moment that you know they love each other -- and they know it, too.

In Before Sunset, there is no spell anymore. Nine years later, Jesse and Celine have grown up. They didn’t meet up six months after their first encounter. The way they interact is subtle, at first as old friends, but the mood heightens very slowly until their love is reborn at the end of the movie. Jesse has written a book about his encounter with Celine, which has brought him to Paris. She finds him at a bookstore reading. They say “hi” and swap stories about their life since their goodbyes. They both have partners; Jesse is married with a kid and Celine has a serious boyfriend. They engage in banter and test the limits of this long overdue meetup. The questions they ask each other are perfectly coy and aloof, not wanting to lead each other to believe that they have each been in the back of their minds.

Then it all cracks as Jesse procrastinates getting on the plane home to the edge of possibility. All of the charm breaks away as their emotions get the better of them in the car ride to say a goodbye to each other again. Jesse is unhappily married and is only in the relationship for his child. Celine feels she drives all the men in her life away only to have them marry the next woman they meet. Their lives are not what they had hoped to be nine years before. They want to find those people on a train again. And here they are in front of each other, “happening” to meet in Paris, again for one night. The puzzle all worked before. Can’t it work one more time? 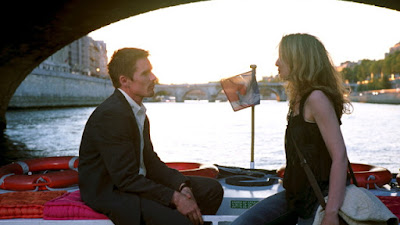 If Before Sunrise was a “love” story, then Before Sunset is a “hope” story. There is so much hope once they tear down their facade of functionality in contentment. “What if…” rings in the background of every statement. Then, when they say the words out loud, the truthfulness is unsettling, yet it releases all the tension of wasted possibilities to create a space for hope to grow again. And that was the moment I had to stop the movie and cry.

There really was nothing else for me to do. The film had created real, honest to goodness hope in me. No matter what I thought I was going to be, do or achieve nine years ago, I was someone chasing the idea of a dream then. At that point in my life, all I wanted was the “love story.” I had been across the world, broken up with a boyfriend (or two), unable to be what any of them had wanted me to be, and found my footing after many, many roadblocks. I am a “grown up” now and, the thing is, those blows could have defeated me, but instead I am still here. I may not have love, and I may never find it. Being an adult is realizing a “love story” is not the goal. The goal is realizing I am lucky enough to still be here to work on myself for another nine years (knock on wood). And, of course, believe there is actual, real love in the world. 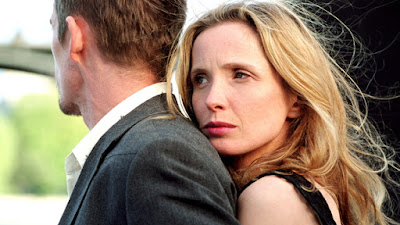 The movie ends with Jesse and Celine implying they are going to give this love a chance. Exchange numbers, give it time, and see if the seeds of their bond will continue to grow. The relationship that is created rings so true to me that I can’t watch Before Midnight yet. I don’t know what happens, but I don’t know if I’m ready for my hope to be squashed. I have to hold on to it for a bit longer before I can handle the uncertainty of their future. There will be a time when I know I will be ready to find out what happened to the love that started over twenty years ago. When my hope is steadfast, I can press play on Before Midnight and live out the rest of the love story that brought me hope at least once in my life.