No Apologies: The Waterboy 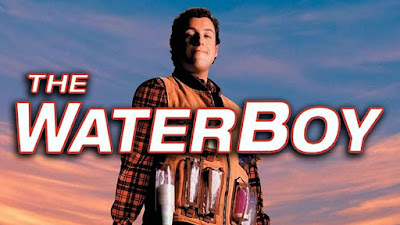 There’s a big old elephant in this room, and there’s no sense in moving forward until it’s addressed: In 1998’s The Waterboy, Adam Sandler plays Bobby Boucher, an intellectually disabled man-child with a Cajun accent and an unreasonable fixation on the proper maintenance, conditioning, and delivery of water. There is no denying, changing, or circumventing that fact. The film is full of jokes made at Bobby’s expense and at that of several other characters embodying embarrassing and outmoded cultural stereotypes ranging from crass and immature to homophobic and racist. The Waterboy could not be made today, nor should it be. It’s an Adam Sandler vehicle, after all, and (with the exception of The Wedding Singer and Punch-Drunk Love) most seem to prefer that we leave this stretch of his career in our collective rear view. With all that said — and with allowances made for the nearly twenty years that have passed since its release — there is a worthwhile argument to be made that The Waterboy is actually a well-constructed comedy that understands exactly how to bend its potentially offensive premise into something warm, offbeat, and deserving of more than its lukewarm reputation. 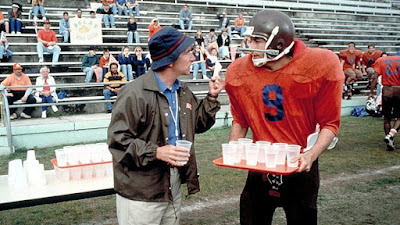 Despite its off-putting lead performance and, again, super juvenile sensibility, The Waterboy succeeds as a comedy primarily through its story structure and execution. While lesser DudeBro comedies simply introduce schlubby goofballs struggling with a rocky transition into adulthood, this one instead spends its first act setting up a bizarre set of colorful characters in a fantasy world and the quirks and complications that guide their behavior. Bobby Boucher is a 31-year-old waterboy for the prestigious University of Louisiana Cougars football team. He’s courteous, conscientious, and committed to the seemingly-mundane task of water distribution engineering. It’s a laughable job, and he’s predictably treated like shit by the players and their cruel Coach Beaulieu (Jerry Reed). When he’s suddenly fired from the job he cherished for years, he returns to his dilapidated swamp house and the Mama (Kathy Bates) we quickly realize is the primary cause of his arrested development. While Bobby loves his overbearing mother, he also craves independence, so he accepts a non-paying waterboy position with the far less prestigious South Central Louisiana State University Mud Dogs, led by the mentally-imbalanced Coach Klein (Henry Winkler).

But we’re not laughing at Bobby’s weakness or his misfortune. In fact, the most admirable thing about The Waterboy — the factor that elevates it above other comedies of its kind — is that he’s almost never the low-status character. Even in situations where he’s derided and abused, those abusing him are always portrayed as ignorant, barbaric, and unenlightened. Bobby has standards and goals. He has passion, benign and useless as it may seem to the rest of us. He takes pride in his abilities and demonstrates expertise in situations where others fall short. He carries bottles of specially-treated water and teaches fellow players (including The Wire’s Larry Gillard, Jr.) about proper methods for preparation and delivery. It’s dumb — so dumb — but it’s how the movie lets us know that we’re on his side, that he’s more than just a punching bag. While he lacks intelligence, he demonstrates a ton of wisdom, and that gives us insight into his point of view. He’s sympathetic to Coach Klein and his losing team. He’s got his eye on the insane and sexy recidivist Vicki Vallencourt (Fairuza Balk), who encourages him to man up and overcome his insecurities. He makes personal sacrifices to appease his Mama. Because Bobby accepts people for who they are and refuses to treat anyone with disrespect, we’re laughing with him instead of at him. Then again, Bobby does have pent-up rage, and when it earns him a spot on the team, we see a literal example of a character’s interior struggle influencing their outward behavior and directly driving the story. While balancing college courses, football practice, and his shaky courtship with Vicki (and keeping all three a secret from Mama), he becomes the unifying force for a team of misfits to whom opportunity so rarely comes. Bobby’s moral fortitude inspires Coach Klein to look past his nervous breakdown and find his lost potential as a master strategist. His earnest enthusiasm provokes his teammates and fans (most of them weirdos and underdogs) to see themselves in a better light. All the while, Bobby channels his anger at his bullies into a remarkable physical force that earns him attention in the highest circles of college athletics. But Bobby’s goals never deviate; he isn’t gradually corrupted by his success or exploited by more intelligent higher-ups. He’s never driven by anger, nor do his emotions compromise his personality. All he wants is to be a good son and play football. It’s such a small thing, but it’s a significant testament to the film’s ethos. The great irony is that Bobby is almost always the smartest, most conscientious guy in the room. 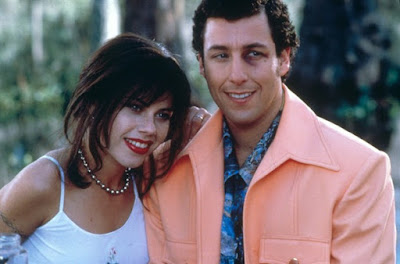 Despite all of this, The Waterboy still features Adam Sandler talking like a baby and screaming at people. It’s crass and lazy as often as it is creative and interesting. That’s going to be more than enough for most people to forgo a rewatch. Hell, Rob Schneider is in it, which more or less disqualifies most things from serious consideration. There will be no nostalgia-fueled critical reexamination of this film anytime soon, but viewers able and willing to see past the surface will find that even the dumbest of jokes at least comes with a set-up and a pay-off (a cornerstone of comedy writing that the Apatow imitators have largely discarded in favor of improv). They’ll find that Bobby’s impaired speech doesn’t affect his wit or grace. They’ll find an underdog story that, while certainly lacking their nuance and dramatic prestige, shares more than a few sensibilities with the classics of the genre. It’s even got a pretty fun Championship Game sequence in which Bobby magically learns to throw a football with perfect accuracy to a receiver eighty yards away. Most important of all, it’s a legitimate step up from the Grown Ups and Jack and Jills of Sandler’s career, an artifact from a time when he didn’t seem so bored. It’s a low bar, sure, but it’s something.