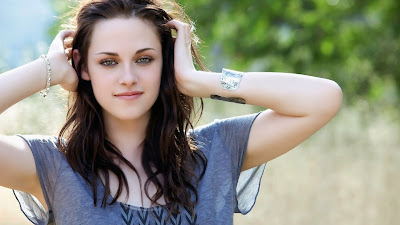 I've never written a letter like this before, but Alejandra Gonzalez, who also writes for this site, jokingly suggested that I should.

This has been a terrible week. Politically, the world continues to fall apart around us. Personally, I remain devastated by the loss of George A. Romero, who passed away a few days ago and thereby denied my wish that he live forever (thanks for nothing, Riskmaster). I still haven't been able to bring myself to watch any of his movies or watch interviews with him, but I have fallen asleep (or tried to fall asleep, at least...I haven't been sleeping) every night listening to his commentaries because I need to hear his voice. But there was a bit of good news that broke earlier this week when it was announced that your latest movie, Personal Shopper, would be getting a Criterion Collection Blu-ray this October. That's right. Kristen Stewart will be in the Criterion Collection*. 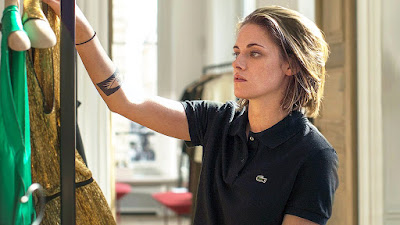 I'm on a self-imposed break from Twitter right now because there are aspects of it that have really been bumming me out, but that's the first place I probably would have turned to celebrate the news because many of the people I know on there are aware of my Kristen Stewart thing. It has become something of a joke -- part of my "brand" (I do not have a brand, unless you count Tobe Hooper mentions and gifs of people killing themselves). So without having that outlet to shout my excitement about this Blu-ray news, I have to turn to this article, which I'm pretending is a letter to you because I am a hack. Such is the beauty of having your own website.

I want to say that your inclusion in the Criterion Collection is long overdue, but I also can't think of many of your movies that should have gotten there already. The Messengers? Maybe. Catch That Kid? I mean, probably. Truth be told, it seems like only recently that people (mostly critics) have started taking you seriously again; the stink of Twilight must have finally worn off and pretentious film writers are ready to take you back. See? You didn't need to star in one of the most financially successful film franchises of all time! You just had to make a couple of movies with Olivier Assayas.

You first came on my radar in David Fincher's Panic Room, a movie I think I like a lot more than most people. You gave one of those performances that was very good for a kid actor, but I found myself way too distracted by David Fincher's camerawork and how well cast you were as Jodie Foster's daughter and the fact that you were standing next to a tank top-wearing Jodie Foster to really take notice of your talent at that point. It wasn't until In the Land of Women, a movie I think I like a lot more than most people, that my sincere and deep feelings for you began to develop. Sure, you were playing some idealized young woman who exists mostly to inspire and motivate Adam Brody's writer character -- a kind of Natalie Portman in Beautiful Girls if she was way older and kissed Timothy Hutton (for the record, even typing that feels gross) -- but you felt so authentic as a teenager who both has a flair for the dramatic but is also genuinely experiencing some teenage shit that I immediately took notice of your talents as an actor. I mean, sure, this is where you started to develop some bad habits -- the biting of the lip, the constant running of the hand through your hair -- but it's also where the notion of what is a "Kristen Stewart part" began to crystallize. The movie was both your blessing and your curse. 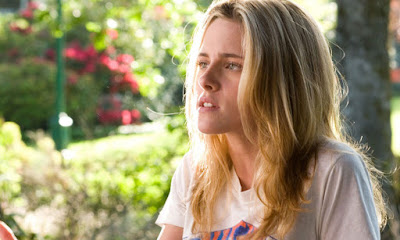 Speaking of a blessing and a curse, it is Twilight that made you a household name. Well, Twilight and your high-profile tabloid romance with your co-star Robert Pattinson. Well, that and your high-profile breakup with co-star Robert Pattinson after some human garbage took photos of you that they had no business taking and then released them as news, which they had no business doing, and then the media treated them as such which they had no business doing. Fake news! (Am I doing this right?) The problems with the Twilight movies -- of which, in full disclosure, I've seen only the first two and a half -- is that they are not very good, but what was so damaging to you as an actor is that you are not at your best in them. Like Natalie Portman in the Star Wars prequels, you seem openly miserable, counting down the minutes until you can get out of this contractual obligation and back to making the kinds of movies you like to make. Pair that with your interviews and promotional junkets for the movies, in which you seemed even less interested, and suddenly you were just this pop culture phenomenon-slash-poster child for social awkwardness instead of a talented actor.

You continued to do interesting work in smaller movies during this time, of course, but even those performances were unfairly written off only in relation to the Twilight franchise. You were just trying to stretch yourself, they said (as though that's a bad thing), or slumming it in small movies while waiting for the next sparkly vampire epic. You were attempting to prove you could act, they said, and to still be taken seriously as an artist. These are not aspects of an actor's performance that are pointed out in the reviews for almost anyone else save your co-star Robert Pattinson; no critic ever talks about "look at this fucking Jessica Chastain, trying to prove herself outside of this thing she does that is very popular." Maybe the reason for that is because Jessica Chastain (and I'm not saying anything bad about Jessica Chastain here because I love Jessica Chastain) has never done anything that's super popular at the box office, so the critical community is still ok with taking her "seriously." It's a weird double standard, in which your success coupled with your off-screen persona combine in such a way that both the industry and critics treat you as something "other." The closest comparison to the trajectory of your career is Jennifer Lawrence, but she managed to win an Oscar around the same time she was starring in a massively-successful YA franchise. She's the anti-you, in many ways, because whereas you have had to claw your way back to respectability, J-Law is beloved by both critics and the industry and more or less gets a pass for anything. Again, nothing against Jennifer Lawrence (who is very, very talented), but I think a big part of this is because she plays the game really well. She goes on talk shows and she's self-deprecating and talks about falling down or burping and hey-isn't-she-just-so-normal and you go on and seem like you want to crawl out of your skin. You don't play the game, and you are treated differently because of it. 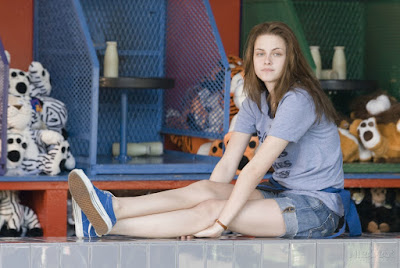 But you've continued to do good and interesting work, Twilight or no Twilight. You've acted opposite Jesse Eisenberg on three separate occasions and outshone him every time, managing to steal Cafe Society and American Ultra and being the very best aspect of Adventureland, a wonderful coming-of-age comedy that might feature what I think if your best performance to date. You were perfect as Joan Jett in the well-intentioned but frustrating The Runaways. You were good in Camp X-Ray and gave one of the best performances in Still Alice, the movie that finally won Julianne Moore her long-overdue Oscar even though I thought it kind of felt like a TV movie. You tried your hand at blockbusters again with Snow White and the Huntsman, a movie I really like even though I have to admit you might have been miscast. And it's not because you're not the most beautiful woman in the world, as the internet was so quick to argue because the internet is a shitty internet, but because your acting style gets swallowed up in these big movies. These are movies that often depend on big personalities to compete with all the VFX; it's why Robert Downey Jr. has been so successful as Iron Man. That's not you. And because these movies are often dependant on dialogue to develop character and move the story forward, they're not always suited for what you bring. There is often a misguided belief that acting is about saying the lines good. It can be, but it's also about being expressive. You are so good at expressing emotion, often in a very still, very quiet way. That's a hard thing to do in front of a green screen.

It was with Clouds of Sils Maria, your first collaboration with Olivier Assayas, that it felt like critics and journalists were finally starting to wake up to what some of us had known for more than 10 years: you are a great actress. Yes, many of these writers were still shitty about the whole thing and had to act surprised at your talent or still find a way to bring up Twilight as though it's the one thing that defines you, but assholes gotta asshole. What I love about you is that you've just continued to work, making the stuff you want to make, keeping your head down and not paying attention to that bullshit even though you've had to put up with way more than your fair share of it. You haven't guided your career in reaction to anything -- not the success or failure of a previous movie, not the online conversation. The closest you ever came to doing so was in not returning for the Snow White sequel, in part because of the personal scandal that surrounded the first movie. But I suspect that even you know it's not the right fit anyway. Besides, you pretty much dodged a bullet there. 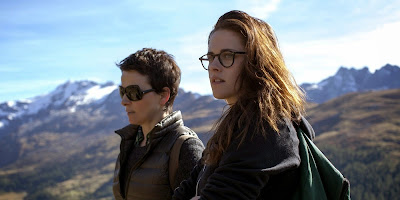 My love for you, Kristen Stewart, is a safe, safe love for a couple of reasons. First, you are rich and famous and we will never, ever meet, nor will you ever be made aware of my existence. So there's that. Second, you are, in your own words, so gay. That pretty much takes care of our Sam and Diane, will-we-or-won't-we dynamic. Third, I am lucky because I am incredibly happily married to someone I actually love more than anyone, not just movie-love, and who understands my affection for you because she has lived with it so long and because she feels the same way about Ryan Gosling. Actually, she feels even more strongly for Ryan Gosling because if the opportunity arose I might really lose her to him, which she would justify by saying she only likes him because he reminds her of me. There is no way this can be true, but if she really believes this I'm not going to argue or talk her out of it. Like I said, I'm lucky.

So welcome to the Criterion Collection, Kristen Stewart. Yes, Michael Bay got there years before you (and with more than one movie, in fact), but such is the nonsensical man's world that is Hollywood. And also the rest of the world. The good news is that you don't let that shit get to you. You live how you want to live, you look how you want to look, you make the movies you want to make, you date who you want to date. And you don't need men for any of it.

*Thank you to the reader who pointed out that this is actually Kristen Stewart's third film in the Criterion Collection, after Clouds of Sils Maria and Certain Women. The rest of the stuff about me being in love with her is still totally accurate, though.
Posted by Patrick Bromley at 12:00 PM