Reserved Seating: War for the Planet of the Apes

Monkey See or Mark Off?

Adam: And I’m Adam Riske. War for the Planet of the Apes picks up after its predecessor, 2014’s Dawn of the Planet of the Apes, as humans and apes stand on the precipice of a final battle with the victor claiming stake as rulers of Earth. On the Apes’ side is the war-hardened Caesar (played by Andy Serkis), who wants peace and segregation for his species from the humans. They are led by a radical Colonel (played by Woody Harrelson), who is not interested in a truce with Caesar and wants to eradicate the ape threat forever.

In this clip, Maurice (played by Karin Konoval) and Bad Ape (played by Steve Zahn in an incredible performance) bicker while trying to sneak around the Colonel and his men, who are holding many apes as prisoners in a work camp.


This is the scene where I went from admiring the movie (and the trilogy, actually) on a more dispassionate level to falling in love with it. The scene is funny and weird and comes out of nowhere. That was my favorite aspect of War for the Planet of the Apes. It’s different than any blockbuster I can remember in terms of its rhythm and pacing. It has the signifiers of other films (e.g. The Great Escape), but a feel unlike that film or even the previous movies in the Apes reboot/prequel trilogy. It’s dreamlike and I grew gradually more mesmerized by it. I thought Rise of the Planet of the Apes, directed by Rupert Wyatt, was OK, but what Matt Reeves has done with the very good Dawn of the Planet of the Apes (featuring Koba, one of the best movie villains of this decade) and now War is an elevation of the material into something special. These last two films have much to say as allegory (same as the original series from the '60s and '70s), but I was even more impressed by just how beautiful they are from a technical craft perspective, culminating in a conclusion that felt like something out of a storybook. This movie is special.

Rob: It is special, and I agree that it’s a remarkable piece of storytelling and design disguised as a summer blockbuster. I tend to give big films like these (I’m thinking of something like Doctor Strange or Rogue One) the “good enough” pass because I’m just so impressed by the behind-the-scenes work that goes into their construction. They’re graded on a curve, for the most part, and I’ve come to accept them less as movies and more as complicated construction projects with thousands of moving parts. But War for the Planet of the Apes reminded me that it’s okay to have high standards. It’s been remarkable to see this series transform from didactic and campy ‘60s science fiction into something intimate and emotional enough to challenge (and even surpass) the most prestigious Oscar Bait. I thought it was ballsy to have the first sequence of Dawn of the Planet of the Apes play out entirely through apes signing to each other in silence, but War takes that to a new level. In fact, so much of it is about close-ups and facial tics that the word “War” feels a little misleading. It’s so much more than that. I really loved it. 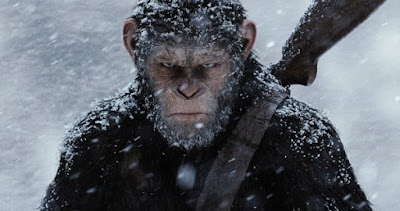 I suppose we should start by talking about the ape effects, which are essentially photo-real at this point. They interact with light, rain, and even camera moves like zooms and focus pulling without feeling artificial in any way. They have weight and mass, which is so necessary for a film that plays them completely straight as real individuals with real emotions. Caesar (who now looks exactly like Andy Serkis — that’s some Ruffalo Hulk shit, right there) is a living, breathing person. He just is. It’s an outrageously beautiful performance that’d damn well better provoke some debate about motion capture acting in the higher awards circles.

Adam: I haven’t always been the biggest admirer of the visual effects in this franchise. In Rise, I thought the ape movements (specifically in the action sequences) had a cartoonish quality that I had trouble getting past. I did think the apes in close-up and medium shot while not in much motion were incredible. Most of that went away in Dawn and I had none of those complaints in War. I agree that the blending of motion capture with photo-realistic visual effects has been damn near perfected at this point. I would give the effects in War the biggest compliment I can and say that they are invisible. I just didn’t even think anymore that these apes were an artificial creation. It’s extraordinary work, and the storytelling has a lot to do with reaching that achievement. I was so engrossed in the second half of this movie that I never bothered to stop and marvel at the special effects.

Andy Serkis should finally be recognized in a career achievement fashion for his work as a motion capture actor. He is a pioneer in filmmaking in many ways through his work in both the Apes and Lord of the Rings trilogies. Serkis is so consistently good that I know I’ve taken him for granted for the past several years, but with this movie, I agree, it feels like the right time to give him some accolades. His performance is all the more impressive because he’s playing essentially the apes’ icon, a seminal being in their progression, and by this film’s conclusion that claim feels entirely earned. 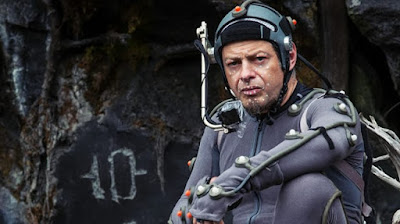 One aspect I appreciated about War (which caught me off-guard due to the title) was how mid-scale it felt. This is a much smaller and more personal story, similar to how the season finale of an HBO series sometimes is muted after a more adrenaline-pumping penultimate chapter. I was also surprised by the size of Woody Harrelson’s role. I thought he would be in much more of the movie, but he is absent for large parts of the film. I didn’t have an issue with that, though, because he casts a large shadow over the rest of the movie as a result of the scenes he is in. It’s an interesting performance. I wish it was not so on-the-nose of Colonel Kurtz in Apocalypse Now, but if you’re going to homage something, you could do a lot worse than that film.

Rob: The film definitely wears its influences on its sleeve (“Ape-pocalypse Now” is literally seen in graffiti at one point), but I agree that all the little gags and references are fitting and handled in a really elegant way. The real draw, though, is that mid-scale feeling you mentioned. The film has one small story that it wants to tell without any distraction or interruption. I honestly can’t believe Matt Reeves got away with de-escalating after what looked like all-out apocalypse at the end of Dawn. They knew exactly how to balance the human roles, too. We spend just enough time with Harrelson and a few select soldiers that we understand the story going on in the background without it ever compromising the foreground. There’s exactly one exposition dump from Harrelson, and that’s it. I was terrified that people were suddenly going to start talking once we got to the camp and that I wasn’t going to be able to hear Michael Giacchino’s gorgeous score, but it never happened. The film’s language never changes. It trusts its audience enough to rely on visuals, which really pays off during the action bits and Caesar’s final confrontation with the colonel.

War is also a beautiful exercise in unconventional story structure. The first act sets up this odyssey through the desert, but then it pivots halfway through and becomes a prison break story. The film follows Caesar’s emotional state so closely that it has the flexibility to become whatever he needs it to be, which is great. It never feels like a group of set pieces stitched together for convenience. And the tone! I kept getting sucked in by the score, the visuals, and the beautiful eye motif (which Harrelson even references at one point) only to be knocked on my ass by one of Bad Ape’s hilarious pratfalls or endearing moments. It doesn’t feel like such a hysterical character should work in such a self-important kind of film, but it went so far toward giving the whole thing a sense of fun. There’s a moment with a puffy vest and the thumbs-up that I want as a .gif on repeat forever.

You mentioned Koba, who I agree was a great antagonist in the previous film. Though his spirit plays a factor, Caesar is really his own enemy this time around. Did you feel that way, too? How about Amiah Miller as Nova?

Adam: I’m glad you mentioned Michael Giacchino’s score, which is extraordinary and probably my favorite score to-date this year. It is always doing something different than what you expect based the type of scene it is playing out. I loved the light drum underscore he gives to the first showdown between Caesar and the Colonel. It sounded very much like score from 2001: A Space Odyssey in the “Dawn of Man” section of that film. Probably not a mistake. And yes! Bad Ape is hilarious, but not in an obvious way. I want Steve Zahn to talk like this in every performance going forward. It’s so, so great. I didn’t connect with the “Caesar is his own enemy” aspect as much as you, but I know you’re not alone in that sentiment from other reviews I’ve read. As for Nova, I had to look up who that was (I saw the movie on Thursday and have forgotten some of it, specifically if she was one of the apes or one of the humans). She’s fine. I dunno. I didn’t think her character was anything special, but it wasn’t bad either. I think the part of the movie she represented was less interesting to me than some of the other aspects. Do you want this series to continue or would you like to see them go out here on a high note with just enough connective tissue to the 1968 Planet of the Apes? 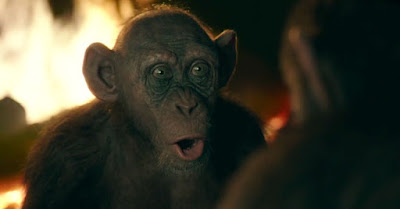 Rob: Is there any film series continuity more convoluted than this one? These are prequels to the original film, but they’re also partial remakes of two of the sequels and alter the timeline in ways I’m not enough of an Apes fan to fully understand. Whatever the case, I think it’s best to go out on this high note. What more is there to say?

Adam: I would agree. I’m excited to see what Matt Reeves does with Batman now. So a Mark Ahn from me for War for the Planet of the Apes. Anything else you wanted to say about it?

Rob: Nothing except for a resounding Mark Ahn. I hope audiences saved some energy after Spider-Man: Homecoming and show up for this one. It should be seen big and loud.

Adam: I agree. I’m going to sound nihilistic here, but it’s sort of a win-win no matter how well it does. If it is a success, maybe we get more Matt Reeves Apes movies?? If not, one more example of franchise fatigue for Hollywood to learn that audiences want original material more than brands and franchises. I dunno, I saw it and liked it. I don’t care about everyone else. What are we reviewing next week?

Rob: We’re hitting one of my most-anticipated films of 2017, Valerian and the City of a Thousand Planets. I cannot wait for Luc Besson to grab my brain and mold it like Play-Doh. Until then…