To Live and Die In Bruges 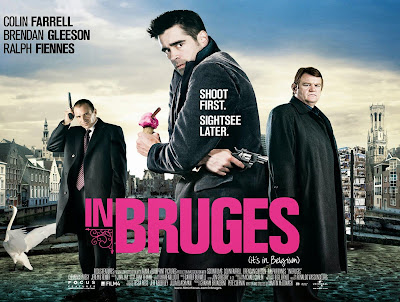 On fatalism in a fairy tale city.

The Last Judgment is a 15th Century triptych painting by Hieronymus Bosch depicting man’s banishment from the peaceful Garden of Eden down to the depths of Satan’s eternal hellscape, a vengeful God’s ultimate punishment for our worst sins. Hitman-in-hiding Ray (Colin Farrell) finds the scene oddly reminiscent of Bruges, the Belgian city in which he’s found himself trapped for the foreseeable future. After he accidentally kills a child who got in the way of a job (a hit on a priest, no less), Ray and his partner Ken (Brendan Gleeson) are sent to the far-off city to lay low until the heat dies down enough for boss man Harry (Ralph Fiennes) to give them the all clear to come home. Though Ray finds the city’s medieval canals and Gothic aesthetic profoundly boring, the older and wiser Ken is eager to explore all the history and character that Bruges has to offer. It’s Christmastime, after all, and as the men contemplate the nature of mortality (by way of cocaine, alcohol, and prostitutes), they discover that Bruges isn’t hell, but a purgatory, a way station between the life they left behind and the uncertain future ahead.

That “way station” feel is essential to the film’s thematic goals. The Bruges of Martin McDonagh’s film might resemble the real one (In Bruges was shot entirely on location), but by populating it with tourists and immigrants of all shapes and sizes, he re-contextualizes it as a kind of dreamlike liminal space belonging to no one in particular. Nearly everyone of consequence is from somewhere else (the Canadian prick, the American actor and tourists, the Irish and English hitmen), and much of the dialogue concerns racial stereotypes and cultural mores: Jimmy the Actor believes there’s a race war coming between blacks and whites. Ray feels that only Chinese lollipop men should know karate. Yuri the Belgian Weapons Dealer is obsessed with the English word “alcoves.” Not to mention, of course, the Vietnamese. The Vietnamese! There’s a real sense that Bruges, while cosmopolitan and beautiful, is on a different plane than the rest of the world. Ken even mentions that the city once sheltered exiled English kings and that a church possesses a few drops of Jesus’ (fuckin’) blood.

But the heavenly beauty of Bruges can’t fully mask the pall of death that hangs over Ken and Ray’s time there. Their cultural field trips take them to countless museums and churches (places of judgment and repentance), and everything from the books Ken reads (The Death of Capone) to the movies he watches (Orson Welles’ Touch of Evil) evokes a real sense of fatalistic anxiety. Even the film Jimmy the Actor (Jordan Prentice) is working on is described as “a pastiche of Nicholas Roeg’s Don’t Look Now,” a story about grief, guilt, and loss. While the two men hope to return home safely after a short time, the truth is that neither truly knows exactly why they’re in Bruges or when they’ll get to leave. They’re waiting for judgment from Harry (their God figure), who will eventually rule that the young Ray must die for his indiscretion; you can't kill a kid, he says, and just get away with it. Harry’s immovable code of ethics cements his position as the Godlike moral authority and creates an imperative for Ken to carry out the sentence, lest he give up his own honor. Since he cannot betray the man who hunted down his wife’s killer, Ken takes the assignment.

But what the older man doesn’t realize is that Ray isn’t exactly looking forward to a life of tomorrows: “I will always have killed that little boy,” he tells Ken, proving that while he may be immature and unmoved by Bruges’ historical beauty, he does have a conscience. The tremendous guilt and shame drive him to attempt suicide, which, ironically, Ken is only able to prevent because he was there to carry out Harry’s execution order. But neither man can pull the trigger. Instead, Ken puts Ray on a train to Anywhere Else and remains in Bruges to await Harry’s retribution. It’s not that he doesn’t have the will to live or the energy to run; rather, he simply understands that he must die for disobeying Harry and going back on his word. A man’s gotta have a code, after all. But Ray doesn’t make it far before another encounter with the Canadian (you know, the one he “heeet”) sends him back to Bruges in handcuffs. It seems that not even Ken’s selfless gesture can override Bruges’ mythical and magnetic powers. No one can leave its borders without a personal transformation, and Ray is no exception.

Thankfully, all is not lost for our Irish friend. He returns to Bruges and reunites with Chloe (Clémence Poésy), the drug-dealing Belgian production assistant with whom he shared a night of brief and memorable passion (in which he also punched a blonde lady and blinded a skinhead). After all that has happened, he thinks he might finally deserve a life with someone nice. Ken agrees: “The boy has to be given a chance,” he tells Harry during their bell tower confrontation. A chance to do something else, to “save the next little boy.” Though Ken knows he’ll go to his grave tonight — and again, truly believes that he should do so — he feels a sense of redemption for allowing Ray to escape. Whether the boy lives or dies is up to him (and Harry, who Ken assumes will keep hunting for him), but Ken has squared-up with his creator for a lifetime spent killing people. He’s glad to die in a beautiful city for a beautiful cause. Ray might die, too. It’s left up to us.* What’s important is that he’s forgiven himself, or at least started to try. He knows what to live for and how to do so, if given the chance. And he really hopes he doesn’t die. He really hopes he doesn’t die.

*While the shooting script makes it clear that Ray survives his wounds, the ambiguous ending of the film makes far more sense.