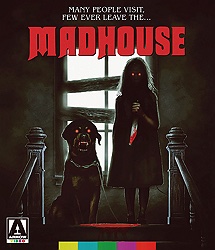 Many people visit. Few ever leave!

A few weeks ago, Stephanie Crawford and I were talking Video Nasties on a special #Junesploitation podcast and I mentioned that finding out a movie is on the VN list is always enough to push me into watching it. That's absolutely true of Madhouse, a lesser-known (to me, at least) sort-of Italian slasher branded as a Video Nasty thanks to a couple of really, really nasty gore scenes. Consider my interest piqued! 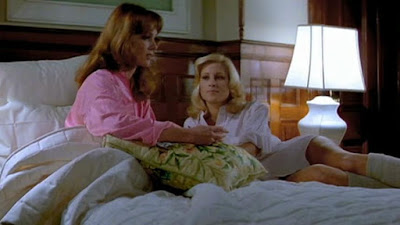 Madhouse '81 -- not to be confused with Madhouse 1974, in which Vincent Price plays a horror star accused of murder, or Madhouse 1990, in which John Larroquette and Kirstie Alley play host to a bunch of obnoxious family members (including Dennis Miller ["I haven't seen this many assholes under one roof since the DNC last summer, babe"]), or Madhouse 2004, in which Joshua Leonard and Lance Henriksen play doctors at a psychiatric hospital -- casts Trish Everly as Julia, a teacher for hearing impaired children who is haunted by memories of her psychotic twin sister, now badly scarred and living in an institution. As the women's birthday nears, people that Julia knows start getting killed off mysteriously -- or as "mysteriously" as you can call getting mauled and eaten alive by a gigantic rottweiler. Fearing for what's to come on her actual birthday, Julia begins to doubt her own sanity and question if the revenge her twin sister swore against her as children will finally be exacted.

Between the slasher vibe, the fact that it was made in the '80s and the fact that it's Italian and is on the Video Nasties list, Madhouse is the kind of horror movie that seems like it was made for me. That's not to say everything about it clicks for me or even that it's an especially excellent horror movie, but it is exactly the kind of title that I'm thankful to discover in this Golden Age of home video. It's more straightforward than the usual Italian horror film, many of which are unbound by rule and logic. Madhouse plays it pretty safe until it doesn't, occasionally letting it rip for bizarre moments of violence that border on the surreal -- the Italians are the only ones who would make a movie in which a giant dog attacks and kills a young deaf boy and then have his teacher go and explain it to kid's class. But there's some genuinely creepy and unsettling stuff in there, too, like a really cool running countdown to Julia and her sister's birthday that increases the feeling of dread and all the stuff with the sister herself (played by Allison Biggers under prosthetics) is handled really well. The mystery aspects of the story don't really play fair, with reveals and motivations that are more or less arbitrary, though perhaps the original Friday the 13th acts as a bigger inspiration than I originally would have thought. 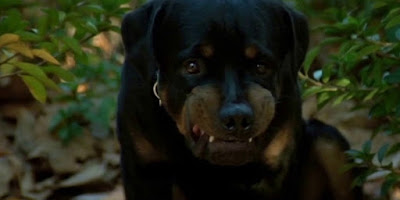 Director Ovidio Assonitis has a number of famous credits to his name, including Beyond the Door (a crazy Italian Exorcist rip-off that I still need to see; I'm holding out until I can get the Code Red Blu-ray) and Piranha II: The Spawning, where he took over as director after firing that go-nowhere James Cameron). The only work of his I'd seen as director prior to this (I've seen a handful of titles he produced) was Tentacles, the Jaws rip-off about a killer octopus that sounds a lot better from that logline than the movie ends up actually being. I can't necessarily speculate that Assonitis had become a much better director in the few years between Tentacles and Madhouse, but the latter is far livelier and less draggy, more tonally consistent and much, much scarier. His use of widescreen is more carefully controlled and effective. The rough edges are still there, but I like a movie with rough edges. Assonitis' directorial output is limited, but Madhouse kind of makes me wish he had made more movies. He directs it like the Michael Winner of Italy (and yes I know he's Greek).

Madhouse isn't for everyone, in that it can be a bit on the slow side and occasionally nonsensical in a way not everyone has the stomach for. Speaking of not having the stomach, there's at least one scene that involves violence against an animal that will be an instant dealbreaker for many; this, along with maybe one other scene in the final minutes, is most likely the thing that landed the film on the Video Nasty list. Unlike most Italian horror movies, the violence is not real (it is, in fact, quite clearly a puppet) and the animal in question more or less deserves it for being a total dick, but I know even in that context it's the sort of thing that many of us don't ever want to see. Consider that a trigger warning. This is the kind of movie that probably works better inside of #Junesploitation than out, because that's a month during which flaws tend to be ignored in favor of the kinds of really fun, crazy things we so rarely see in movies. If I can pass just one piece of advice on to any of you, it's this: watch more movies in this way. Don't get bogged down in the messier elements. Learn to love the mess, or at least to look past it for what is different and good. Live every day like it's Junesploitation. Madhouse is as good a place to start as any.