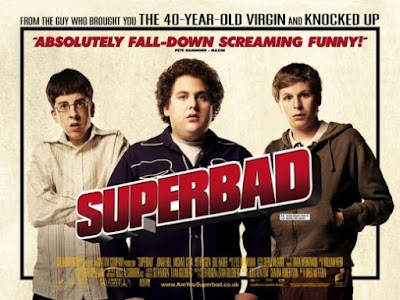 “Why don’t we say that every day? Why can’t we say it more often?”

Regardless of whether or not you’ve ever been a teenage boy, we’ve all encountered enough of them that Superbad’s opening phone conversation between Seth (Jonah Hill) and his best friend Evan (Michael Cera) shouldn't be surprising. They’re talking about sex — not the kind they’re having themselves, of course, but the kind on the internet. Seth is trying to decide which porn site to subscribe to when he leaves for college in a few months. He’s intrigued by the graphic spectacle of “The Vag-tastic Voyage,” but Evan prefers something with more class and production value. This argument is more than just an indicator of their personalities (though that will be relevant in a minute) — it’s a glimpse into their codependent relationship. They stay on the phone until the moment Evan gets in Seth’s car. The audio even echoes enough that we have to notice it. Their constant tether to each other is just that important, so much so that Evan’s mom (Stacy Edwards) wonders aloud how they’ll be able to survive when they go off to separate schools. And that’s where Superbad’s driving conflict becomes clear: this isn’t a sleazy romp about getting as drunk and laid as possible before graduating. It’s about two friends forced to confront a dangerous world without each other. 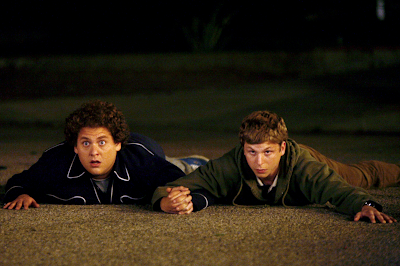 The next topic of frustration is boners, specifically the societal acceptability of their display. Why can’t we show them off? Women appear topless on magazine covers; they wear skirts and cut their necklines low to emphasize their assets, so why do we have to shamefully tuck our erections into our waistbands? It’s an adolescent rant that, again, is about something more than it's about. Their real question is this: Why can’t I express myself honestly? Why can’t I speak up to bullies or confess my love to the girl I have a crush on? Why do I have to posture and deflect my feelings and make everything more uncomfortable than it already is? The bigger irony is that Evan and Seth are actually their own worst enemies. Their aforementioned crushes, Jules (Emma Stone) and Becca (Martha MacIssac), give the boys more than enough opportunities to be themselves and earn their affection — they’re just too wrapped up in each other to see it. They’re displacing, projecting. To continue a metaphor, there are plenty of people who are willing to see their boners — they just have to muster up the confidence to whip them out, confidence they’re afraid to exhibit without the safety of each other’s company. 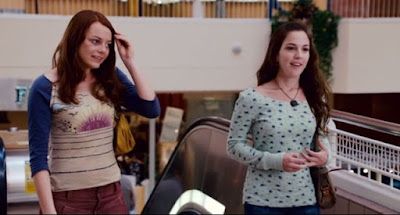 Seth is especially guilty of this dependent behavior, and while his preoccupation with Evan leads to some of the funniest moments in the film (“Seth! Get off the field!”), it also creates conflict with Fogell (Christopher Mintz-Plasse), the Friend No One Likes and primary competition for Evan’s affections. Seth resents that Fogell and Evan will be rooming together at Dartmouth while he flounders alone at a less-prestigious state university. He and Evan were always supposed to go to the same school, he complains later in the film, and Evan’s superior academic skills are tantamount to a betrayal of their friendship. Evan wasn’t supposed to leave him behind. And he did. He knows it. Why else would he hide his arrangements with Fogell until the last minute? Why didn’t he accept a spot at State so that he could stay by Seth’s side for as long as possible? Because for as much as he loves his friend, Evan knows this arrangement can’t last. He knows that, at some point, they’re going to have to find a way to function independently. Evan doesn’t just want sex from Becca the way Seth seems to from Jules — he wants a real connection. For the first time, he wants to see what else the world has to offer.

And so after promising the ladies that they could get booze for the big party, our boys go out into that world, hoping to come of age in a glorious explosion of Gold Slick Vodka and spermicidal lubricant. What’s interesting is the way the film splits them up: Seth and Evan run into Francis (Joe Lo Truglio), whose seedy vibe and awkward desperation essentially make him a grown-up Fogell. Fogell, on the other hand, is picked up by Officers Slater and Michaels (Bill Hader and Seth Rogan), two reckless and self-involved friends whose disregard of professional norms gets them into trouble. If they sound like adult versions of Seth and Evan, you might be picking up what Superbad is putting down. These would-be adults reflect who the three friends might turn into if they don’t move on, if they never grow up. The film then subverts expectations by presenting the adult world (the bar with the violent psychopath and the burnout party with…the violent psychopath) as dangerous and unfulfilling, while the kids at Jules’ kegger seem more genuine and inclusive. When they reconvene there at the end of the film, the boys have seen glimpses of their futures and found inroads toward healthier self images. 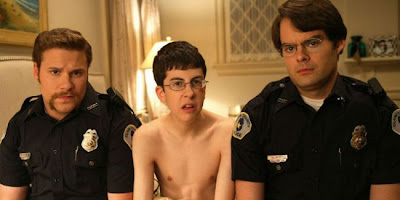 But sometimes we need to hit rock-bottom if we’re going to learn anything. Seth, pissed drunk, admits to Jules that he only drank so much because he never imagined she’d want him sober. Evan, sweeter and more naive, thinks it’s okay to get with a drunken Becca if he’s equally intoxicated.* In the end, Jules rebuffs Seth’s advances and reassures him that she likes him for who he is (emboldening his self-confidence for about ten seconds before he head-butts her and passes out), and Evan’s conscience catches up with him in time to put the brakes on Becca’s Best Blow-Jay Ever. Confused and despondent, the boys escape the busted party and return to the safe womb space of Evan’s basement. There, they admit that it’s never been about the girls or the booze — it’s about their fear of losing each other. They curl up close — Superbad’s version of a passionate love scene — and finally confess their feelings. It’s a truly cathartic moment that strips away all of the jealous insecurity that has crippled them for so long. The next morning, the film ends on the most romantic exchange possible: “You have my number,” Evan says as the pair splits up. “I have your information,” Seth responds, no longer afraid that moving on means losing his best friend.

*For the purposes of this essay, I’m largely whistling past the issue of consent in Superbad. Yes, Seth and Evan are essentially planning to date rape their crushes. No amount of hemming and hawing about naivety and innocence is going to change that. We may clearly see the (flawed) logic and emotional roots of their behavior, but that doesn’t excuse it. It’s a serious conversation just outside the scope of this essay.