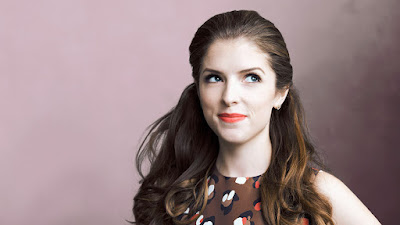 In celebration of Anna Kendrick’s birthday this week, I asked Rob 31 (no pun intended #Zombie) questions about his crush.

1. What is it about Anna Kendrick you like so much?

Well, it’s a complex question. Obviously she’s beautiful and has a great voice, but I find I’m drawn to the unpracticed nature of a lot of her performances. She’s incredibly dynamic and striking, but her best parts play into her incredulity and wit. I think that’s why her career trajectory is so spotty — people just aren’t ever sure what to do with her. Her roles usually bounce back and forth between Manic Pixie and Stuck-Up Tight-Ass, and she’ll mix in a singing part in something like Trolls every now and then to pay the bills. She reminds me a ton of Diane Keaton, someone for whom I also carry an eternal torch. It’s not that they’re “quirky,” necessarily. It’s more that they both seem very comfortable cultivating an outsider appeal.

My favorite movie that she’s in would be Scott Pilgrim vs. the World, but my favorite Anna Kendrick role is in Pitch Perfect. I’ll always go to bat, completely unironically, for that movie. Character clichés aside, I think it’s a well-constructed comedy that uses music to underscore its themes in effective ways. I’m glad one of her few lead roles is in something I find extremely watchable. The second Pitch Perfect’s a goddamn trash fire, though. It doubles down on all the things that suck about the first one and essentially replaces Kendrick with that flashlight girl.

3. When did you first realize you liked Anna Kendrick?

4. When did you first realize you loved Anna Kendrick?

“You have juice pouches and Rocky!”

5. Have you read her book, Scrappy Little Nobody?

I still haven’t. It’s on the stack, but I'm saving it for a sick day when I can blow through it in one sitting and make a video collage of all my favorite anecdotes.

6. Who is better in the Twilight movies – Anna or Kristen?

Having only seen the first one in its entirety (and having just now Googled a supercut of all Anna’s scenes in the others), I’d argue that Anna is better suited for her character than Kristen is for hers. This isn’t a slight against Kristen, of course, but she’s so clearly bored and underserved in a way that Anna isn’t. Anna’s general vibe always rides a line between self-involved and endearing, so she’s well suited for condescending bullies.

7. Kendrick came from a theater production background. Have you ever been in plays? Which ones?

I was in the band for a production of Grease in the 9th grade. That counts, right?

8. She stands at 5’2”. You do not. What opportunities or challenges could this provide if you two were to date?

I figure our primary means of transportation would be piggy-back rides. Plus, I’d always be able to smell her hair. Her hair seems like it would smell nice.

9. She is a fan of Jim Broadbent. How strong is your Broadbent game? What Jim Broadbent related pickup line could you use on Anna Kendrick?

I could tell her all about my GREAT BIG BUSHY BEARD!

10. Do you prefer Drama Kendrick or Comedy Kendrick?

It varies. It’s no secret that she’s been in some terrible movies, so it’s less for me about tone as it is whether or not she actually gets to play a character. I think she’s got incredible timing in the right comedies and incredible vulnerability in the right dramas. It’s just so rare that she gets good jobs. Mike and Dave Need Wedding Dates pitches her awkwardness toward that sloppy “hot mess” angle that sucks away her intelligence. The Accountant relegated her to “exposition girl” status, which means she spent the entire movie having the plot explained to her. Table 19 and The Last Five Years just make her seem shrill and immature. Obviously, I understand that she’s an actor playing different roles, but it’s frustrating to see her used so poorly so often. 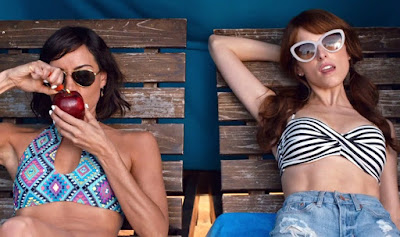 11. What is one role/franchise/genre you would like to see her tackle that she has not?

I’m sure she’d want to be in another big musical, but I’d love to see her take on an Aaron Sorkin script or a murder mystery. A good ensemble piece with great dialogue and a bit of moral ambiguity. I’d like to see her play a true villain.

12. She lost out on her Oscar to Mo’Nique in Precious. Thoughts?

I think her best performance is still ahead of her, so I’m willing to wait.

13. She loves old screwball comedies. What do you bring over on your first movie date?

His Girl Friday or The Apartment. I think she would have made a great Golden Age movie star, actually. Billy Wilder and Howard Hawks would have known exactly how to use her. She’d have been a great dame.

14. What do you have to offer Anna Kendrick?

15. What does Anna Kendrick have to offer to you?

16. Describe in a single word how Anna Kendrick makes you feel.

17. She was born in Maine. Have you been to Maine? What could you discuss about Maine to find common ground?

I’ve never been, but it sounds like a fun road trip. Apparently it’s the least densely populated state in the union, which I could impress her by knowing. What else? I’ve read a few Stephen King books, although not as many as Patrick. Remind me to talk to Patrick about this. Wait. Isn’t lobster a big thing there? I’m allergic to shellfish. You know what? Worth it.

The Bull….Charger. The Charging Bull. The Lightning…Crusher. Something tough. Make me sound tough. 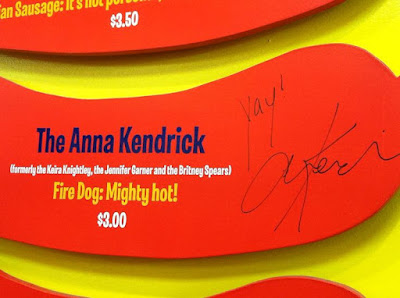 Any of her tweets about food. I know she’s not REALLY out there eating an entire birthday cake by herself, but her effort to sell it warms my heart.

20. She loves Kraft Mac n’ Cheese. What can you do with this information?

I could explain that by adding a can of tuna to it, you can get like four meals for about $3. You think she’d be into that? Tuna fish is sexy, right?

21. She is a huge Beyoncé fan. What song of Beyoncé’s would you tell Anna Kendrick means a lot to you?

I saw her tweet about Lemonade a lot, so probably one of those. Also, I would start listening to Beyoncé.

Get a Job is nearly unwatchable, but I think she has a few nice moments in that one.

Happy Christmas, for sure. She has a bit more to do and shares a lot of scenes with Melanie Lynskey, who is also lovely and wonderful.

My birthday is only two months after hers, so the gap isn’t as wide as it seems. Still, I could blame all of my personality defects on youth and inexperience. That’s a plus.

25. If you were to make her a mix, what are some songs you would put on there?

“Closer” by Tegan & Sara, “All My Only Dreams” by The Wonders, and “All You Wanted” by Michelle Branch.

26. Do you own any Anna Kendrick merch? (e.g. posters, autographs etc.)

I do not. That would be weird. I’m not some kind of weirdo. Right? Adam?

27. You love Anna Kendrick and Edgar Wright….you have to pick one side after they split romantically in 2013…who would you choose? Keep in mind, whoever you don’t choose you can no longer be a fan of theirs.

I knew you were going to ask me this, and I hate you for it. Edgar Wright. Dammit, Adam. You’re a monster. Whatever. She would want me to be honest, and I would honestly give up any shot with her to see them get back together.

I think she has good chemistry with Joseph Gordon-Levitt in 50/50. They both have really telling smirks and sad eyes that say more than the dialogue allows. They seem like they’d spend a lot of time spooning each other. 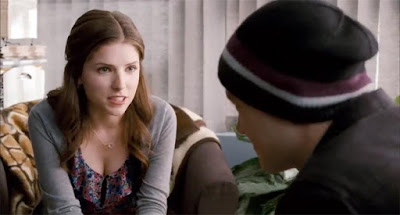 Clooney! They both have that charming, wry cynicism thing going.

30. Are we going to do a Reserved Seating on Pitch Perfect 3?

I burned all the Kendrick capital I had on Table 19, so I won’t force it. But don’t you want to find out why they’re skydiving and leaping from exploding boats? Don’t you want to see if she makes out with Ruby Rose? Because I do.

Whichever one she’s singing right now.
Posted by Patrick Bromley at 5:00 AM