Off the Shelf: HELL UP IN HARLEM (Blu-ray) 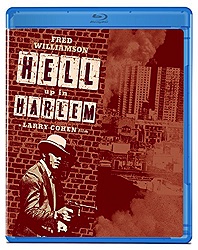 Black Godfather is back...and there's gonna be Hell up in Harlem!

1973's Black Caesar is one of the most iconic and important entries in all of blaxploitation, as it provides Fred "The Hammer" Williamson with one of his earliest starring roles and, more importantly, is really the film that codified his onscreen persona by way of his three rules: he has to win all his fights, he gets the girl and he can't be killed. Though the movie ends with Williamson shot and bleeding out in the street, he does not die on camera. He can't. He's The Hammer. And to prove that Williamson's character Tommy Gibbs survives the injury, he re-teamed with writer/director Larry Cohen later the same year for a sequel, Hell Up in Harlem. While not as influential as its predecessor, I happen to like the sequel even more than Black Caesar.

Having survived the attempt on his life that ends Black Caesar, Tommy Gibbs is back and better than ever, determined to take down a corrupt New York D.A. (Gerald Gordon) and going to war with his own father (Julius Harris) for ordering a hit on Tommy's ex-wife. He also falls in love with a religious woman (Margaret Avery) and re-teams with an old friend, a pimp-turned-holy man named Reverend Rufus (played by the great D'Urville Martin). 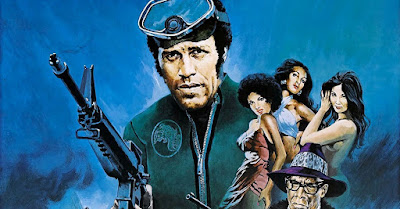 While I will always like Black Caesar for giving Fred Williamson such a larger-than-life character to play (the first of many) and for the way it reappropriates a formerly "white" genre for a black audience (it's basically a remake of the 1931 Edward G. Robinson gangster film Little Caesar), I have to admit that I prefer the sequel for its sheer entertainment value. This movie is wall to wall awesomeness -- essentially a 90-minute revenge fest with a massive, bloody body count, all set to Edwin Starr music. It has the authentic New York feel of all writer/director Larry Cohen's work, plus a cast of terrific character actors all getting to take turns being either slimy or totally cool. With the exception of an extended sex scene -- see Williamson's Rule #2 -- Hell Up in Harlem is almost entirely given over to action and colorful dialogue, including what has to be one of the greatest one-liners ever delivered to a bad guy in the history of movies.

While none of Larry Cohen's films are especially polished, Hell Up in Harlem is pretty crudely constructed even by his standards. With very little money and very few permits to shoot around New York, the director takes a real run-and-gun approach to this one, often breaking up the action into too many shots and too many cuts until it resembles an amateur or student film. I'm not complaining, of course, as it's part of the film's charm; besides, I like my exploitation movies rough around the edges. Hell Up in Harlem is rough around the edges, with an emphasis on "rough" in the best possibly way. I love how much Cohen and Williamson are not fucking around in this one. 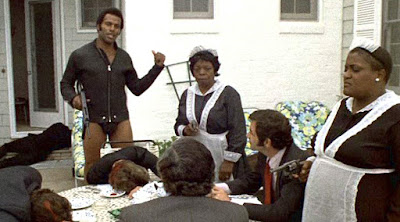 Olive Films released Hell Up in Harlem on Blu-ray for the first time this week, and the disc is worth picking just for the new audio commentary featuring Cohen and Steve Mitchell, director of the upcoming documentary King Cohen: The Wild World of Filmmaker Larry Cohen. It's always fun to listen to Cohen talk about his work because he's so open and honest about the process of making low-budget films but also really understands how movies work, and his conversation with Mitchell about Hell Up in Harlem is both informative and enlightening. Of course, the movie is a blast, too, so the commentary is just added value to a title that's already worth owning. It's Fred Williamson and his buddies running around shooting guys who are even worse than they are. You shouldn't need any more convincing than that.