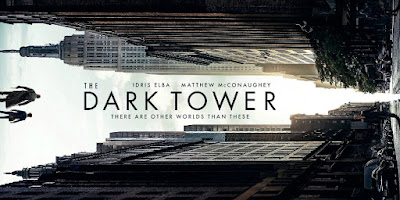 After many years of development and creative turmoil, we finally get the first film adaptation of Stephen King’s novel series The Dark Tower. Unfortunately, the result feels destined to satisfy no one. I came to The Dark Tower as someone who has not read any of the novels and I can say that the movie does a lackluster job of indoctrinating a new audience to the lore and sweep of the story. It’s not a movie where I was totally at sea because it has many classic tropes of the genre (e.g. a child audience conduit into a new world, an ultimate hero facing off with an ultimate evil etc.), but the specificity lost me and my guess is the little details and not the central conflict are what makes The Dark Tower novels special to so many readers. The movie feels generic and without an authorial voice. Also, it’s one of those multiverses. Do you dig on multiverses? I dig on multiverses - but not this one. 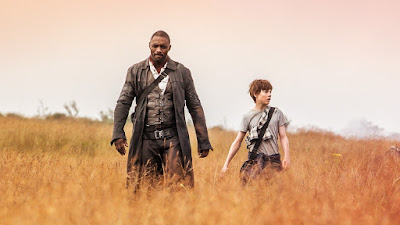 I knew the movie was in trouble very early on because it has a whiplash approach to its world building in the first fifteen minutes. A lot is introduced and all I could help thinking the entire time was how that initial stretch was probably hundreds of pages of the novels crammed together. So much of the movie feels that way. It’s like you’ll see a scene played out in full from, say, novel #4 and then the next scene is an extrapolation of something from novel #6 and so on and so on. It has so many ideas but no idea of which one to hone in on, so the movie feels like it’s restarting constantly. The Dark Tower runs about 90 minutes without the end credits, and while normally running time isn’t an issue, in the case here I think it really is. I would be shocked if this movie wasn’t originally two hours or more and got butchered due to test screenings and studio notes. So many characters feel like they’re missing their scene to better show how all of them work together in the context of the movie (these include Fran Kranz, Abbey Lee and Jackie Earle Haley) but we never get those moments. Also, Idris Elba is so good at inhabiting his part as Roland Deschain that it had to have been informed by the novels or script elements that somehow never got translated onto the screen. Elba is the absolute bright spot in the movie and the only thing that keeps The Dark Tower out of the same breath as Jonah Hex.

On the other side, Matthew McConaughey’s performance as The Man in Black is a miscalculation. Is it true to the novels? I can’t say, but on screen he doesn’t feel threatening enough as the ultimate evil. Part of that is the movie doesn’t take the time to build him as an absolute threat, instead choosing to let McConaughey strut around like Mick Jagger and hiss his dialogue. This so feels like a performance where the actor said “I want my body language to be like a rattlesnake.” It gets annoying because it’s so one-note and unimaginative (it reminded me of Charlize Theron’s take on a big bad in The Fate of the Furious). You have to make your performance invisible within the film in a genre entry and not play it like you’re acting in quotes, which I see so many Oscar winners do when they go “slumming.” Filling out the notable cast is Tom Taylor as Jake Chambers, our guide through The Dark Tower story. He’s effective and gives the movie an earnestness that helps it along, but he’s not charismatic enough to drag the movie to success alone. No one is. Not even Idris Elba. 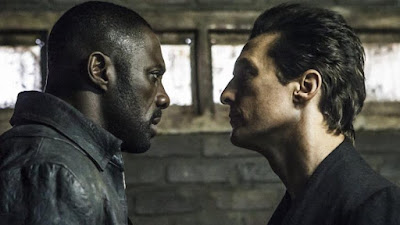 The Dark Tower works better when Roland leaves his universe (is it Mid-World?) and comes to New York. There is about five minutes of funny fish-out-of-water scenes with Elba and Taylor that had a Last Action Hero feel too it. The climax of the movie is also well done and exciting, as Roland tries to save Jake from The Man in Black. The rest of the movie sinks, though, under the weight of too many settings and characters and details and not enough patience to let the story play out on its own terms. Everything is rushed and very little is earned, which results in the movie feeling slow because I didn’t connect with it. It’s difficult to get wrapped up in the movie when the entire time you’re like “Wait, what’s that monster? Do I want the tower to fall or don’t I want it to fall? Why is the tower important at all? What do the beams shooting into the sky mean?” I’m sure there were answers to all of these in a throwaway line of dialogue somewhere, but at that point I had stopped caring.

I feel bad for fans of The Dark Tower novels more than anything. This is an easy movie for a Dark Tower virgin to shake off, but for a true fan it must be difficult to see your thing bastardized and fail so much that it might be a long time before it gets the adaptation/re-interpretation on-screen that it deserves. All in all, The Dark Tower is not the worst movie of the summer, but it is a major missed opportunity.
Posted by Patrick Bromley at 5:00 AM