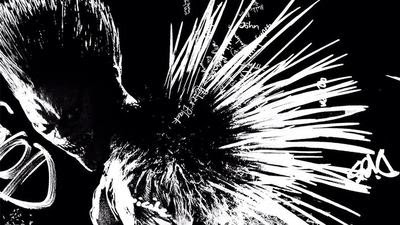 Adam Wingard adapts a popular Japanese story and the internet loses its shit.

As someone with zero familiarity with the original Death Note manga series or any of its many adaptations, I enter Adam Wingard's new Americanized take as a total noob. I know that the internet was gunning for the film months before it was ever released, accusing it of whitewashing a story that is fundamentally Eastern, and then spent the weekend trashing it online. I can't comment on its merits as an adaptation, but rather can only consider how it works when taken as its own story. On that level, it is entertainly nasty and quite well-directed, but more than a little messy. Even without knowing that this is a much larger story that's been condensed down to 100 minutes, the movie feels like it needs to be a much larger story but has been condensed down to 100 minutes. 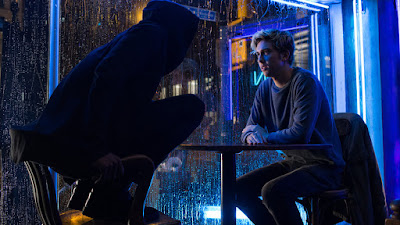 In this American take made for Netflix, Nat Wolff plays Light Turner, a bullied high school outcast who gets his hands on a mysterious Death Note one day when it literally falls out of the sky (note to writers struggling with making sure your inciting incident is organic: I guess stop trying so hard). The Death Note, as it were, is a ledger of sorts in which you can write down the names of people and how you want them to die and within two days that's exactly what will happen. The Death Note also comes with its own personal demon, a spiker monster named Ryuk (voiced gleeful menace by Willem Dafoe), who is only visible to Light. When Light wants to impress Mia, the girl he likes (played by Margaret Qualley), he shows her the Death Note and the pair decide to play God, creating a character named Kira who dispenses righteous justice to the wicked. This draws the attention of L (Lakeith Stanfield), a brilliant and eccentric detective determined to discover the identity of Kira.

That's a lot of story, right? Probably enough for three movies. Death Note crams it all into a single film, rushing through beats that could use more time to breathe in the span of a few moments. The leap from Light and Mia messing around with the Death Note to them becoming gods is rushed, then plays out in a single montage. It's a fascinating idea that plays into the revenge fantasies of disenfranchised young people looking to exert some control over a world in which they otherwise feel powerless. I wish that the screenplay for Death Note, by Charles Parlapanide, Vlas Parlapanides, and Jeremy Slater, had developed some of these themes better, as it would help Death Note feel like it's about something more than porting over a bunch of story beats. Even the moral questions of good and evil -- is it acceptable to use the power of the Death Note to rid the world of people who are dangerous monsters?-- are paid mostly lip service in a debate that appears to be happening around the fringes of the film. 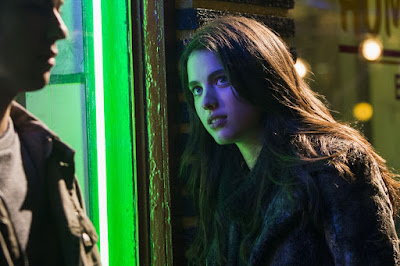 So while the movie takes on more story than it's able to handle, Wingard's deft and stylish touch as a director makes it all go down smooth. This is easily his slickest film and one that, five years from now, will likely prove itself to be an interesting warm-up to his big studio blockbuster work like the upcoming Godzilla vs. King Kong. Borrowing a visual scheme from Japanese manga, Death Note is a film of gorgeous cityscapes streaked with brilliant flashes of neon color. Rather than dragging the narrative down with teenage brooding or insincere fatalism (both of which lend themselves to the story he's telling), Wingard keeps the tone light and is clearly most at home when staging the death scenes. If the Final Destination series was still a going concern, I would nominate Wingard to make the next one -- there is both visual invention and glee in the way he shoots the deaths, made all the better by the movie's reliance on splattery practical gore effects to sell the gags. I get why viewers are disappointed in the movie as an adaptation of Death Note and I can agree that the story starts to fall apart once you examine it at all, but I had too much fun with the horror elements for me to dismiss the movie as anything but a lot of fun.

My favorite part of the movie (besides the over the top bloodshed) is the execution of Ryuk, who exists as part devil on the shoulder and part imaginary friend. I love his design, I love Dafoe's characterization, and I love Wingard's decision to go practical with the execution (it's an actor in a suit, with CG enhancements for the facial expressions). Like most of the characters in Death Note, however, Ryuk is disappointingly static. I don't require major emotional growth for a demon that functions primarily as a catalyst for the rest of the story, but Ryuk has no real surprises in store. That might be ok if the other characters did, but many of them behave in ways that are incomprehensible, too -- none more so than Mia, a character who makes drastic choices based on the needs of the screenplay without ever revealing who she actually is. Lakeith Stanfield comes out ok as L, even if his character is little more than a collection of quirks and eccentricities, while Shea Wigham fares best in a supporting role as Light's cop father. He's a man with a code as both a police officer and as a father. If every character was as clearly drawn as Wigham's is, Death Note might have overcome some of its story problems and amounted to more than "fun." 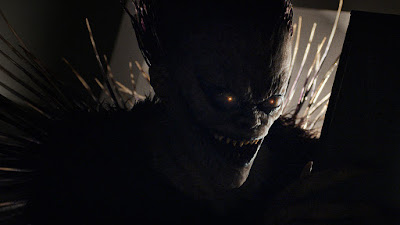 I'll take fun. I don't think that Death Note really fits into Adam Wingard's overall filmography, which to this point has been largely about working within established subgenres and twisting them into something new and surprising; this feels more like a for-hire gig, one to which he brings style and energy even though he's able to conquer the story problems. I had a good time watching Death Note even as I couldn't shake the feeling that I was getting the CliffsNotes version, and while it didn't exactly inspire me to rush out and track down the other adaptations, it did once again remind me of what a talent Wingard is. He's a strong enough filmmaker that he managed to make a not-very-good Death Note movie seem pretty good.
Posted by Patrick Bromley at 12:00 PM