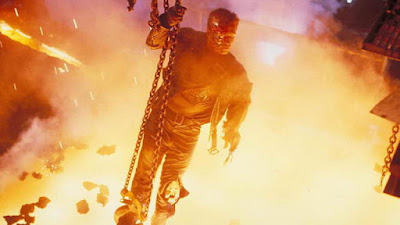 Come with me if you want to live in 3D.

Adam: After 26 years, the James Cameron sci-fi classic Terminator 2: Judgment Day returns to theaters with a 3D gimmick. I would go into the plot and show a clip, but you already know the plot and I can’t post a YouTube clip in 3D so neither of these things will happen. I’ll start by saying that this viewing of T2 was unlike any I have ever had in mostly positive, but not life-changing ways. I think you’re perfectly fine seeing T2: 3D in theaters and perfectly fine if you don’t. Rob, what did you think of the 3D transfer? What is your history with the movie? Did you discover anything new by seeing the film in a theater (again or for the first time?) in 3D? Is this Arnold Schwarzenegger’s best movie? What did they see in Edward Furlong? Is this movie metal (like heavy metal, not metal metal)? I need your clothes, your boots and your answers.

Rob: I’ll just get my general objection to 3D out of the way by saying I generally object to 3D. The whole point of good cinematography is to create the illusion of depth within the confines of a 2D image, and I feel like most 3D presentations force that depth artificially at the cost of image quality. I've never seen a 3D movie that wasn't too dark (because I'm watching a movie with sunglasses on) or that didn't give me a headache from focus issues within the first ten minutes. Terminator 2: 3D was no different. On top of that, my theater’s sound system was so poor that the film sounded like it was being projected underwater. So essentially, I was struggling desperately to watch one of all-time favorite movies on the big screen for the first time. It was not a great experience.

As for the film itself, I thought the 3D was effective in the opening future battle and the highway set piece with the helicopter. Other than that, it was largely a distraction. I don't want to sound like too much of a grump, though, because this is a movie I truly love and have since I was a kid. It was the first movie I ever owned on physical media and my introduction to Schwarzenegger in general. It was great to finally see it on the big screen and discover that it holds up so well. It definitely sits at the top of Schwarzenegger’s filmography for me (with Last Action Hero in a close second - Don't @ me), and it remains one of the only science fiction sequels that actually improves on the original. I'm not necessarily saying it's better than The Terminator (it's kind of an Alien/Aliens situation - they're so different), but it does build on the original’s theme of the perils of parenthood in a fascinating way. I mentioned in a column that will run later this week that it's a film that grows with me. I think it's truly timeless.

The Furlong question is a tough one. I might be in the minority here, but I honestly don't think there's anything wrong with his performance. I think this movie is brilliantly cast (we don't talk enough about how amazing Linda Hamilton is), and his unpracticed delivery works for his character. He should be a little irritating, otherwise his mother’s work doesn't feel as important. At the same time, this presentation did remind me just how obvious his dialogue manipulation (whether ADR or just alteration - reports differ) was. That's definitely not something I noticed watching the film on VHS.

One other technical bit I appreciated on this release was the stuntman face replacement. Arnold’s motorcycle double has always been one of the few “bloopers” that actually takes me out of a movie. I was looking for it this time, and I was happy to see how well the digital work blended in.

And yes, this movie is metal. Liquid metal. 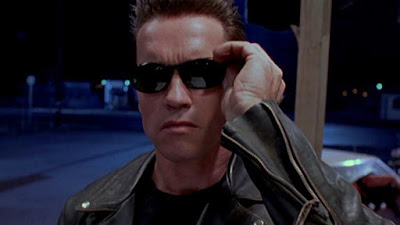 Adam: I don’t dislike 3D as much as you do (I’ve had a handful of good experiences where I think the movie in enhanced - usually in IMAX and for special effects heavy films like The Polar Express or the most recent Star Wars movies) but I don’t disagree with you about it in general. It rarely adds to the movie. I thought the 3D for T2 was good at times. I liked the depth of field in certain sequences, like the opening battle between man and machine or the finale at the steel factory. On the whole, I pretty much forgot about the 3D most of the time because the film is so strong. Seeing it in a theater again helped to make me forget about little complaints I grew to have about T2 over the years. I remember when we showed this at an F This Movie Fest a few years back and I was worried that I didn’t like T2 as much as I remembered when it was released in 1991. This viewing at least got my love for the movie back to where it should be. Save for a few ‘90s-esque flourishes (the “Bad to the Bone” joke, the “I need a vacation” joke, both of which PLAYED in 1991), Terminator 2 is just about as perfect of an action movie as you can get and my favorite James Cameron film. I wish the movie was in IMAX 3D instead of RealD 3D, but that’s probably because the movie wasn’t shot that way, I suppose. I don’t know.

I had the same thought as you about the stunt double face swap. When Arnold does that jump with his motorcycle and I saw it was Arnold’s face (and not his stunt double), I was happy because it’s a digital tinker that improves the movie. I’m glad James Cameron didn’t futz with the movie for changes more drastic than that. I also agree with you that this was the viewing where my big takeaway is how great Linda Hamilton is. I mean, she’s amazing. When I was younger I was so caught up in Arnold and the spectacle that Linda Hamilton’s performance didn’t really capture my complete attention, but here she’s so interesting because she’s flawed but also really (believably) strong and committed. I also appreciated Joe Morton this time out a lot. He’s a character actor I’ve always liked (he’s great in Speed), but I really took to how he plays Miles Dyson as a guy who isn’t Dr. Frankenstein but instead someone so caught up in his gifts that he doesn’t completely understand the long-lasting effect of his work. I can imagine so many movies portraying Dyson as a man who wants to play G-D or sabotaging the Connors/T-800’s mission and it’s so refreshing that it’s not that in T2. I also love seeing a tentpole from 1991 and admiring how it has just enough action beats to satisfy before overstaying its welcome. If T2 was a 2017 release, I can just imagine the T-1000 emerging from the hot steel as some sort of fire monster. Thank goodness that didn’t happen. 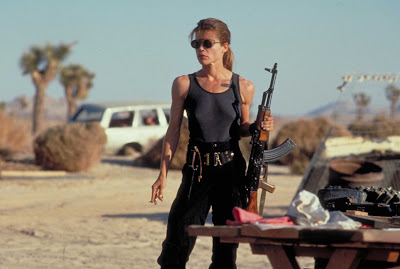 Rob: Back when tentpoles were actually tentpoles and not just...every studio movie that came out.

Rob: I think even I would have to allow a walkout on that one. Overall, though, this was a good experience. Given how the Terminator franchise has grown into this bizarre, grotesque mess, it's nice to be reminded how solid its foundation actually is. Also, The Sarah Connor Chronicles is underrated. Check it out. What are we covering next week?

Adam: We’re going to have a special edition of Reserved Seating where we each cover ten movies we want to watch for the first time during Scary Movie Month 2017! I’ve got stacks on stacks. Until next time…