Riske Business: 10 Ways We Can Get Blockbuster Video Back

“Every great achievement starts as an idea because if you don’t have an idea it would be a non-starter entirely.” – Adam Riske, F This Movie!

10. Booth Babes – This used to be common at technology trade shows until people woke up and smelled the ‘90s. So, let’s change it up a bit and have CELEBRITIES drawing people back to Blockbuster Video instead of scantily clad models promising the illusion of sex. The celebrities will each build a brick & mortar store and then stand outside with a sign that says “Yes, I’m Harrison Ford (or whoever the celebrity is). Blockbuster Video is back. Come over! This is actually happening.” 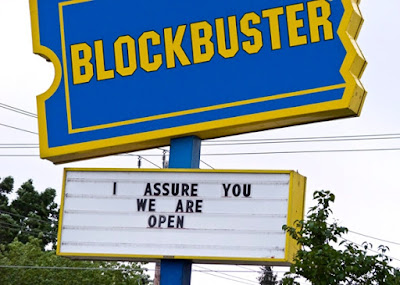 9. Speed Dating – Not everyone who goes to Blockbuster will be a loser in love, but it wouldn’t hurt if we expand our base by exploiting those people’s shortcomings. Every Blockbuster will have a Speed Dating event on Thursday nights (it’s almost the weekend but it doesn’t have that weekend pressure) and what the speed daters don’t know will be most of the women are just Blockbuster employees we have as plants (e.g. Becky from North Barrington’s store will be at the South Barrington speed date event). The hot male and female CSRs (customer service representatives) will be the plants and butter up the clientele to make them think they are desirable so they’ll keep coming back. Once you get these people equating Blockbuster Video to sex, you’re golden. If, by some wild chance, there’s a match, the man will meet the woman at the Blockbuster Video location where the Speed Date was held because safety. When the date is over, the woman will shove the man in a human-sized drop box before midnight so as not to accrue a late fee.

8. Dynamic Home Video Blitzes – This example should be followed every time.

You just rented Taking Care of Business, didn’t you?

7. Tell People Physical Media Sounds Better than Digital Like They Did with Vinyl – Just say it like you believe it and the Urban Outfitters hipsters will put down their mason jar beers and head over to Blockbuster Video. It’s not rocket science. Also, if you see a hipster, remove the Blockbuster Video sign and replace it with one that says “Buster’s Video” so they think it’s a small business and not a corporate entity they’ll refuse to support.

6. Legacy Team Leads – Who’s steering the refurbished Blockbuster ships? Legacy Team Leads! Mix a little old school with this new school. It’s just like what Dr. Lee (Orlando Jones) would have done in Drumline. Honor the past and the present at the same time. Bridge the gap. Are you a store manager from 1998? I want you front and center. Are you a cocky upstart that’s never had a job but thinks everything is fucking stupid if it’s not your own idea? Well, young lady, I want to hear that new sound you’ve been working on. 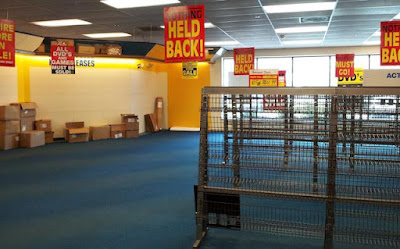 5. More Candy and Food Options – Look, people. A lot of new food has been made since 2014. We’ll need all of it. We’ll still have the Blockbuster staples like popcorn, pop, cotton candy, etc., but we’re gonna need some food fusion. I’m talking food trucks, buckets of pizza, Cheerios flavored Matzo Balls etc. If I don’t see a little league team in uniform after a big game coming in on the regular for Go-GURT and a new release, I’ll take it as a personal insult.

4. Neuralize Everyone – People got used to streaming and renting things from home. We’re gonna have to make them forget all of that. I’m not sure how, but it will involve technology. I also want to see the CSRs in schools at every spare assembly spreading the Blockbuster Video gospel. Behavior is learned. Show them how to rent through mock trials. 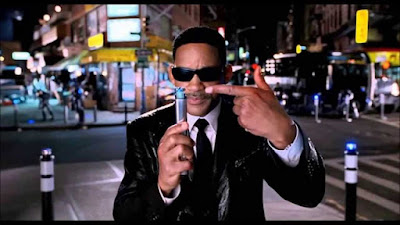 3. Streaming Disinformation Campaign – We won’t catch everyone with neuralizing. As back up for that, we’ll start a disinformation campaign about streaming (it will make you sterile, it increases depression, etc.) and #BusterCanHelp.

2. Redbox Kiosks – We’re going to hide them (tarps, burial, flash mobs) and super glue the slit where the discs go in and out. I’ve never seen a business model so at the mercy of entrepreneurs. 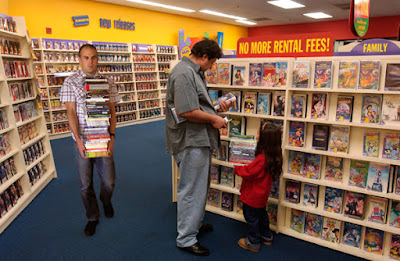 1. Put Netflix Out of Business – Still working this one out, but it’s going to involve buying the land Netflix is on (see The Founder, which is on Netflix so they’re giving me the tools to their own destruction) and I think they are run on a lot of technology so we should find the Motherboard and remove its data ports like Bowman did with HAL.
Posted by Patrick Bromley at 12:00 PM