Redboxing: UNFORGETTABLE and EVERYTHING, EVERYTHING 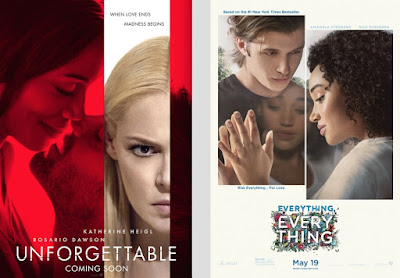 You already forgot about both of these movies, didn’t you?

Remind me to ask Patrick for a Female Stalker Day next Junesploitation. I want an excuse to revisit 1993’s The Crush and finally cross Play Misty For Me off my homework list. Does Single White Female hold up? Has anyone watched it this decade? Stalkers of any gender would do, really. Remember The Fan? Anyway, Unforgettable stars Katherine Heigl as WASPy ice queen Tessa Connover, who’s troubled by her ex-husband David’s (Geoff Stults) new squeeze, Julia (Rosario Dawson). Julia, unsuprisingly, has her own dark past with Michael (Simon Kassianides), The Psychotic Ex. Though her restraining order against Michael conveniently expired yesterday, Julia feels safe enough living in David’s McMansion and helping him take care of his young daughter, Lily (Isabella Rice). But when David proposes, Tessa vows revenge. She steals Julia’s underwear and mails them to Michael. She makes a fake Julia Facebook page and sends her anonymous flowers to make David jealous. Eventually, she begins stabbing people. Like you do. 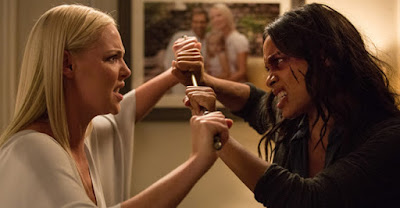 There isn’t much to say about Unforgettable — resist the pun — other than that it’s a Fatal Attraction clone and that I really wish Adam Riske was reviewing it instead of me. He’d probably have a lot more fun with the film’s bland soap operatics and be charmed by the story of a Wall Street executive who moves back to his small hometown to make craft beer and divorce Katherine Heigl. But you’re stuck with me, and I got nothing. One interesting wrinkle is Helen Manning as Cheryl, Tessa’s oppressive mother. She has a few fun character moments and jams her way into the film’s denouement as an unexpected sequel hook. Other than that, it’s really hard to get excited one way or another about Unforgettable. It’s an uninspired story that no one should be expected to tell with any real interest. Rosario Dawson is still being desperately underserved by Hollywood, and Katherine Heigl is doing little more than an impression of a Deadly Bitch. They’re both better than this.

Everything, Everything (2017, dir. Stella Meghie)

There aren’t enough good YA movies. Kids have Pixar and adults have, I don’t know, Christopher Nolan? McG? But make a list of truly great YA movies from the last few years that aren’t The Edge of Seventeen or The Fault in Our Stars. They’re mostly just Hunger Games clones, and that’s shitty. Everything, Everything, while a little predictable at times and slow in the midsection, is not shitty. Based on the 2015 novel by Nicola Yoon and colorfully directed by Stella Meghie (Jean of the Joneses), it’s the story of Maddy Whittier (Amandla Stenberg), a creative and brilliant young woman who suffers from a genetic disorder that has crippled her immune system since birth. She’s never been outside for more than a few seconds; anything more than that could be deadly. She lives with her mother, Pauline (Anika Noni Rose), a doctor breaking countless medical ethics codes by acting as her daughter’s primary physician. Maddy is happy, if more than a little lonely. That all changes when floppy-haired douche Olly (Taylor Hickson, because of course that’s his name) moves in next door. They fall in love and set out on a journey of self-discovery that takes them far beyond Maddy’s comfort zone — literally — and changes both of them forever.

Keep an eye out for Amandla Stenberg. She’s intuitive and honest in a way that many young actors have to fake, especially considering how well-read and funny her Maddy is written to be. The film itself has a nice honesty, too. Until it’s groan-inducing third act twist, it succeeds through creativity and respect for its characters. Maddy is sheltered, but she’s not naive. Her states of mind are nicely communicated through visual references to The Little Prince (her favorite book) and the tiny sentient astronaut she builds into each of her architecture projects. Meghie also finds a way to make texting visually interesting without overusing the “words on the screen” gag that everyone stole from Sherlock. She stages the conversations as face-to-face meetings inside Maddy’s imagination, and it’s funny to hear one character tell another to “type faster!” when they’re looking right at each other. It keeps Maddy in the narrative driver’s seat and injects some texture into her courtship with Olly. There’s also a nice reference to Moonstruck and a gag pulled straight out of Annie Hall — the one where subtitles tell us what the characters are really thinking. It’s almost as if the film wants to act as a romantic comedy starter pack, which is certainly nothing to take for granted.

And now, the bad news: Everything, Everything’s bloated second act gives way to a twist so obnoxious that it almost undermines the entire film. You’ve probably guessed it already. You feel it coming the minute you learn that Maddy’s brother and father died in an accident shortly after she was born. You feel it coming as soon as Pauline fires Maddy’s nurse Carla (Ana de la Reguera) for letting a stranger get too close to her. But Everything, Everything had been so good about avoiding the obvious melodrama up until that point. Maddy and Olly’s Secret Hawaiian Honeymoon (which ends with Maddy in the hospital) made her physical limits real and folded them into the astronaut motif in a really great way. The drama was always internal, always centered around Maddy’s feelings about herself. But then the movie cops out. It gives up. It got me thinking about our expectations as viewers and about false catharsis — the way dramatic beats can feel good because they service the audience but then ring so hollow later on because they fail the character. Everything, Everything kind of fails Maddy in the end. It’s not as interesting as she is, and it forgets what makes her unique. But it still works.
Posted by Patrick Bromley at 5:00 AM