Why You Should Watch ONLY THE LONELY This Month 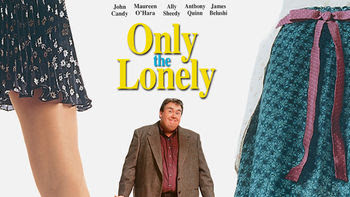 I mean, you can watch it whenever, but you’ll probably forget if you don’t do it soon is all.

On the recent podcast Patrick and I did on The Fugitive, I listed my ten favorite Chicago movies and Only the Lonely was my dark horse #5 pick. In retrospect, it should have been a little bit higher. F This Movie! listener Kunider left a comment that he wanted to hear my thoughts on Only the Lonely, which was a real gift because it gave me an excuse to re-watch this beautiful, old-fashioned romantic comedy and write about it.

I have a fondness for this movie for many reasons, but the silliest one is that it was a movie I turned down seeing during its release. Growing up, I got a birthday movie every year from my parents. I could choose to see anything playing in theaters (or anything not rated R in the case of May 1991 when Only the Lonely came out). Looking back at my options, I could have chosen Only the Lonely, What About Bob?, Soapdish, F/X 2, Mannequin Two: On the Move…but no, I had to see Drop Dead Fred. I deservedly got shit for that choice for many years. How in G-D’s name did I go with Drop Dead Fred? And how in G-D’s name did Only the Lonely and Backdraft (another of my favorite Chicago movies) open on the same day? We were spoiled in the summer of 1991. Except for Drop Dead Fred. Movie Math: Freddy’s Dead > Drop Dead Fred. Same studio. Same year. Think about that. 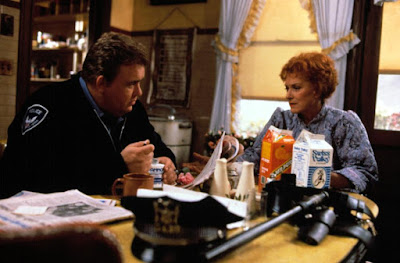 For those of you who haven’t seen it or need a refresher, Only the Lonely stars John Candy as Danny Muldoon, a Chicago police officer who had some bad romantic experiences and is more comfortable being less than proactive about his prospects in love going forward. A major reason Danny is hesitant is that his mother, Rose (played by Maureen O’Hara, in what would be a one-film comeback performance after decades in retirement) is an old-school Irish woman who loves her son but is, quite frankly, a judgmental bigot. Danny feels guilty that any woman he dates will not get his mother’s approval and will cause her to lash out because she’s no longer the only woman in his life. Danny meets Theresa (Ally Sheedy), an introvert who works in a funeral home, and the Marty-like triangle forms when Danny is egged on by an old bachelor to ask Theresa out and not let another chance at love pass him by. The cast is rounded out by welcome faces like Anthony Quinn (who is super charming here), Kevin Dunn, Jim Belushi (great because he’s the spice and not the stew), Milo O’Shea and even a cameo-sized visit from Macaulay Culkin in between Home Alone and Home Alone 2: Lost in New York. 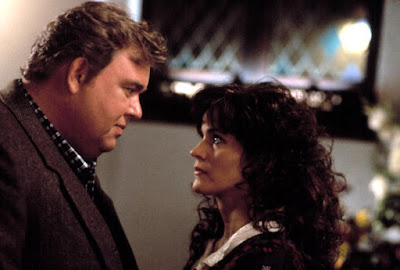 I relate to a lot of Only the Lonely in uncomfortable ways. I’m not going to go into much personal detail because I don’t care to relive that part of my past, but the movie touches on very real (and not movie-cute) relationship problems. A large hindrance to Danny and Theresa finding everlasting love are both outside influences and themselves. The movie feels vulnerable in a way few film romances do because the foundation of the couple is so fragile. Danny’s mother and brother object to Theresa for reasons that are fair (Danny is rushing the relationship mainly because he feels Theresa is the best he can get) and unfair (her Italian background, her “plainness” and depressing profession) and Theresa objects to Danny’s reliance on Rose and refusal to stand up to her when she denigrates Theresa. The Sheedy character wants Candy to put her first and even he doesn’t know if he has the strength to do that. He seems to be hedging his bets, and there’s an undercurrent throughout the movie that both Danny and Theresa even think their romance is on shaky ground.

One of the most heartbreaking aspects of Only the Lonely is Candy’s self-imposed martyrdom. He (like me in a past relationship) is trying to negotiate happiness between two sides (his family and his significant other) who do not like each other. By trying to make both happy all the time, he is making neither side (or himself) happy. It’s an extremely painful position to be in and all sides get hurt. Only the Lonely is, if nothing else, about Danny getting the fortitude to take a stand in one direction. 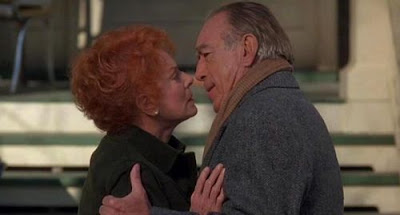 One of the most beautiful aspects about the movie is how the older men in the film (Quinn as Candy’s neighbor and Bert Remsen, who is a drunken elderly bachelor at the neighborhood bar) are rooting so hard for Danny to not wind up alone like them. Most of the other characters in Only the Lonely don’t want Danny and Theresa to work out (or they do, but to work out on their terms) and, again, it makes their relationship that much more at risk of failure. Another heartbreaking subtext of Only the Lonely is that it came out just three years before John Candy died. Sometimes movies take on a poignancy outside of themselves (another example is Dogfight, starring River Phoenix) and much of the reason I’m rooting so hard for Candy in this film to find love is because I can’t separate him from his character. His relationship with Sheedy feels like one on borrowed time and one I need to see succeed, if only briefly. Luckily, Candy was married for many years off-screen and had children, so the movie isn’t too biographical, but anyone who’s read about John Candy, the man, can infer he was like Danny Muldoon – a sweet soul with a share of melancholy behind the laughs.

I’m maybe making Only the Lonely sound like a drag, which it’s not, so let’s switch gears. It’s a beautiful, sunny movie about normal people that doesn’t shame them for being normal. The early-'90s Chicago setting exhibits the neighborhood feel I love about the city. It’s a great town with a lot of wonderful people who celebrate their heritage. Only the Lonely is a very pro-Irish culture film and I love it for that, just like I love Deli Man for celebrating Jewish culture or the My Big Fat Greek Wedding films for their “Greek is Great” position. Movies like those are prey to falling into stereotypes, but if they come from a place of affection and experience, why is that a bad thing? If anything, it gives a movie like Only the Lonely extra dimension than a more “Michigan Ave” Chicago romance might not have. I’ll also love the movie forever and ever because Danny and Theresa’s first date is at old Comiskey Park. The new ballpark opened in 1991, but while director Chris Columbus and team were filming Only the Lonely they got access to use the old one because the 1990 season had ended and old Comiskey Park was due for imminent demolition. It’s a scene I love because it lets me see a beautiful field view of a ballpark I only went to a few times (I mostly started going to Sox games in the 1991 season at the new Comiskey) and because the old Comiskey being set for destruction is like this interesting little metaphor for Danny’s status. His old way of life is about to be destroyed and it’s time for him to find a new home. And if I needed another reason to love Only the Lonely even more, it ends with a stop in the fictional Willoughby, of which fans of the “A Stop in Willoughby” episode of the 1960s Twilight Zone series will understand the significance. 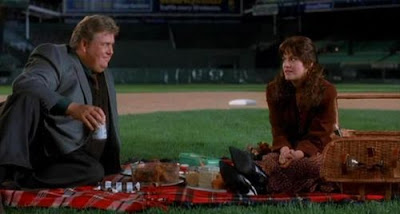 The movie isn’t a complete success. Danny’s ability to get anything at will around the city because “Sometimes it’s good to be a cop” is weird. The whole subplot of Danny imagining his mother dying in car accidents, shootings, falls, etc., because he made a choice to think of himself evolves from amusing to an eye-rolling, tone deaf fever pitch by the end. Maureen O’ Hara’s character is old-school mean to the point where you want to offer her no sympathy. I could mention other nitpicks, but I choose to not let those obstacles bug me. You do that with something (or someone) you love. There are always going to be flaws in relationships or in art, but sometimes you just should suck it up and get out of the way of your own happiness. The beautiful takeaway of Only the Lonely is that Danny and Theresa only will fail if they decide to put the other stuff ahead of the fact that they love each other. None of their issues can’t be worked out if they put their love as priority. I love this movie and hope some of you check it out for the first time or again.