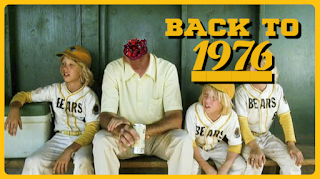 Alice Sweet Alice is a lot of things: a slasher, a psychological horror, a family drama, and a commentary on Catholicism. It’s an obscure but memorable horror movie unlike anything else that came out in 1976.

Alice Sweet Alice is a tough watch, and I *think* mean that as a compliment. Truth be told, it’s a really sleazy movie, but it’s done so incredibly well that you can’t help but be a little bit stunned and impressed by it. It was directed by Alfred Sole, an avid fan of Hitchcock who wears his influences on his sleeve, but also has a foot in absolute trash. Sole had a very brief directorial career, only helming four projects: one of them is a porno, another features Prince’s protégé Vanity as a model on an island inhabited by an ape that she has some weird sexual thing with (as one does). His final film is a comedy/horror featuring Phil Hartman, Paul Reubens, and Carol Kane that seeks to poke fun at the horror trends of the time. That leaves this movie as the oddity, a relatively-straight psychological horror film with elements of early slasher horror. 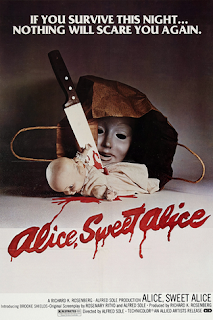 The setting is New Jersey, 1961. A very young Brooke Shields makes her movie debut here as Karen, a little girl about to have her first communion. Her 12-year-old sister Alice (played by a 19-year-old Paula E. Shepherd from Liquid Sky) really doesn’t like Karen and resents all the attention that she gets. These two kids do not get along, but Alice doesn’t really seem to get along with anybody. She’s a mean, angry kid, but we’re not sure why. Within the first few minutes of the movie—and this is not really a spoiler—Karen is killed and then set on fire at her communion by someone wearing a creepy mask and a yellow raincoat. It sure seems like it was Alice. All signs point to Alice. It must have been Alice. What follows is a nice little exercise in tension and mystery, with Alice lashing out against everyone in the movie as the murders continue and the body count rises.

Part of what makes Alice Sweet Alice so compelling is that things happen that we don’t usually see in movies. There’s no artificial gloss here; shots don’t seem to be composed to make the actors look good. There’s no artifice or cinematic grandeur. Instead, Soles takes an almost fly-on-the-wall approach. This is very clearly an independent film made without the involvement of a studio, and it feels like literally anything can happen. A kid is almost molested. An animal is apparently abused (it’s impossible to tell how much is cinematic illusion). It really feels like this story isn’t on any rails at all. While the overall tone of the film and the elements I just mentioned are very upsetting, they also give it tremendous power. This is a movie that sticks to you after you’ve watched it. It takes a while to wash it off. 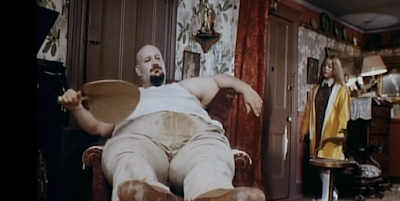 I mentioned Hitchcock earlier, and it may seem like that influence has no place in a 1976 low-budget horror movie from a director like Soles, but it fits surprisingly well. When we see a poster of Psycho in a shot, it’s clear that Soles is paying homage to the master with his film, but it’s also clear that he’s learned well. There’s a sense of dread and unhappiness that runs through this movie at all times, and everyone is simply miserable. As much as this is a horror film, it’s also an exercise in consequences and a commentary on hypocrisy, jealousy, and resentment. Furthermore, Soles makes sure that we never quite know what is really happening until the final moments of the movie, keeping us guessing and then throwing our conclusions out. Our focus is shifted more than once.

The disturbing tonal elements are aided by extensive use of Catholic imagery, which has clearly been inserted to further amplify our sense of unease. Though there’s not anything overtly anti-Catholic in the narrative, there’s an undeniable undercurrent of resentment toward the church, and it’s apparent that the director is using religious iconography to unsettle us. Churches feel cold and sterile, and the religious rituals themselves seem empty. In researching this movie, I found that Alfred Soles was excommunicated from the church after he directed Deep Sleep, his 1972 adult film. These things can’t be coincidence.

I want to say that the supporting cast shines, but “shine” isn’t the right word for a movie in which there is no light. Instead, I’ll say that the cast is effective. Paula E. Shepherd really does seem capable of dark deeds as Alice, lacking the child-like innocence embodied by Brooke Shields. Linda Miller (An Unmarried Woman) plays Alice’s mother, and she brings layers of depth. Really, she probably has the most material to work with and has the most demanding role. She shows the absolute despair of losing a child, but balances that despair with a love of the surviving child. And yet that love is tainted by suspicion and…well, there’s a lot more there. The rest of the cast is rounded out by a priest, played by Rudolph Willrich (The Number 23), his housekeeper, played by Mildred Clinton (Serpico), and Alice’s dad (Niles McMaster, Blood Sucking Freaks), a character who had left his wife and children but returns after his youngest daughter’s death. 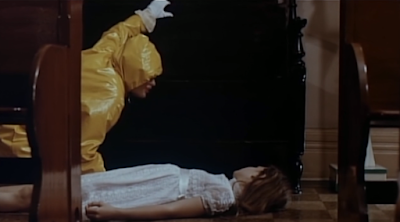 The most memorable supporting cast member, however, is Alfonso DeNoble, a morbidly-obese man who only appeared in three movies before his death in 1978. DeNoble is the kind of personality that would have been right at home in a John Waters movie. He’s presented here as an absolutely disgusting character, a cat-loving pedophile with stains on the crotch of his pants. It turns out the only thing more repulsive than a front butt is a soiled front butt. Searching the internet to learn more about him, I’ve learned that DeNoble was discovered working as a bouncer at a gay bar. I’m fascinated by this guy because he’s completely repellent, but also impossible not to watch.

Alice Sweet Alice is often cited as “the most giallo movie that isnt’ giallo,” (giallo is an Italian word that means “ice cream”) and I have to agree. It feels super-European, and many of the Italian horror traditions associated with giallo are alive and well here. You’ve got religious stuff, dysfunctional family drama, psychological elements, slasher elements, and a deep mystery that continues to unfold until the end. I’ve mentioned the slasher aspect several times; some people consider this to be an early entry in the slasher subgenre that was soon to be set off like a powder keg with 1978’s Halloween, but I don’t know how accurate that is. While the elements are undeniable (a masked killer with a preferred weapon and a visually-distinct appearance), they take a backseat to the psychological elements and the thriller/mystery of the story itself. This movie isn’t just one thing, and that’s part of what makes it so compelling. 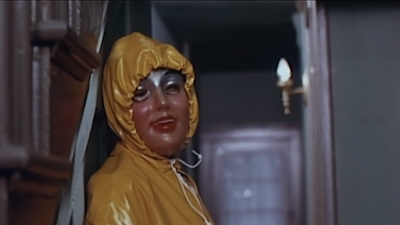 Alfred Sole stopped making movies after 1982, frustrated with the Hollywood system and the lack of progress when dealing with studio executives who only served to slow down the creative process. He now works as a production designer, contributing to a ton of TV shows like Veronica Mars and Castle. It’s so crazy to me that a guy who was so subversive and outside the system is now literally in the belly of the beast, working on some of TV’s most popular shows. It’s really a shame that he walked away from directing because he was a filmmaker with some interesting things to say and very offbeat ways of saying them. Alice Sweet Alice is undeniably a powerful movie made by an undeniably talented guy. Check this one out if you’re looking for a truly different horror experience, but don’t watch it at bed time; the monsters in this movie are all too real.

Read more of Heath Holland's writing as his blog Cereal at Midnight!
Posted by Patrick Bromley at 12:00 PM