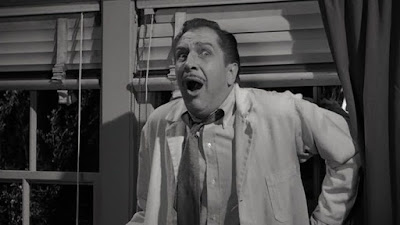 Like bacon, Vincent Price improved whatever he was in.

A recent theatrical screening of The Tingler proved two things: 1. William Castle’s 1959 “Percepto” epic is a lot of fun and 2. Vincent Price is a national treasure. The film is low budget, the direction is crude, the other performances are adequate at best, the creature is a rubber centipede on a visible wire, and the exhibition gimmick is borderline cruel. Yet Vincent Price’s performance towers over everything—never condescending to the material, and always selling it with a visible joy in his performance in every scene. Vincent Price is the cherry, the whipped cream, and the varicolored sprinkles that turn a plain scoop into a fucking sundae. 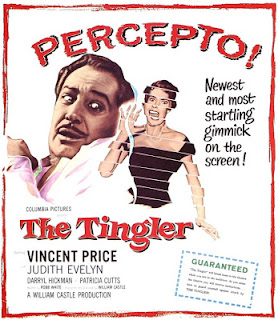 Castle had made bushels of money with his previous two “gimmick films.” Macabre in 1958 offered prospective audience members a $1000 life insurance policy in case they died from fright during the film. The House on Haunted Hill followed in 1959 and featured an exhibition gimmick called “Emerg-o!” that required theater owners to fly an inflatable skeleton on a wire over the heads of patrons at a predetermined point in the film. Both films were huge commercial successes. House also starred Vincent Price. Because Castle could not meet Price’s salary demand, he offered Price a percentage of the profits.

Castle and Price re-teamed at the end of the year to make The Tingler, with Price again agreeing to a percentage of the profits. For the movie’s gimmick, Castle had motorized buzzers installed beneath a few of the seats in theaters showing the film. At a key point in the film, the monster supposedly gets loose in the actual theater (don’t ask how a rubber centipede can break the fourth wall—IT JUST CAN.) From the darkened screen, Vincent Price implores audience members to “scream for the lives,” while the projectionist presses a button in the booth that gives “lucky” patrons a tingle in their fannies. Fun? I guess?

Well, from what I have read about The Tingler (which is plenty), in 1959 this gimmick played.

Price stars as Dr. Warren Chapin, who has been investigating a strange force that he has dubbed “the tingler.” Whenever we are afraid, Chapin theorizes, a physical creature takes hold of our spines and threatens to kill us. When we scream, we neutralize the creature and it is rendered harmless. In the scene in which he explains this risible theory, Vincent Price is so good he makes it sound almost plausible. Any actor can spout a bunch of authentic scientific jargon to sell an audience on something that makes sense. It takes a pro like Price to sell us on an incomprehensible theory formed of gobbledy-gook and nonsense. This scene plays like a master’s class in real movie acting. Let the Oliviers of the world sell silk purses made of actual silk; Vincent Price reliably sold genuine sow’s ear purses for decades.

One scene in The Tingler finds Price really earning himself his percentage of the profits. In an effort to scare himself sufficiently to manifest his own tingler, Price decides to take LSD, a drug that was not yet illegal in 1959. Price locks himself in his office, shoots up, and then narrates his drug trip into a tape recorder. He whines, he moans, he wails, he makes funny faces—this is not “LIKE Vincent Price tripping on acid,” this is literally Vincent Price tripping on acid—and somehow he never stops talking. The resulting scene is like a Shakespeare soliloquy projected through the lens of a 1950s exploitation horror film. It is five minutes that defines why we all love these movies.

I deeply appreciate how Price’s performances are usually over-the-top, but never hammy. I can’t think of another horror actor who so well knew where the line was separating “fun” from “camp.” The only Price performance I have ever considered hammy was his turn as Egghead on the old Batman television series. But who knows? In real life, Price was a gourmet chef; maybe he was just trying to serve up… some ham and eggs?

Watch him in The Tingler. He is generous with co-stars, consistently dreams up inventive line readings, maintains our focus even through dreadful tedium, never “phones it in,” never projects a veneer of “I am above all of this,” and never relents when it comes to an actor’s main duty: selling the narrative to the audience. 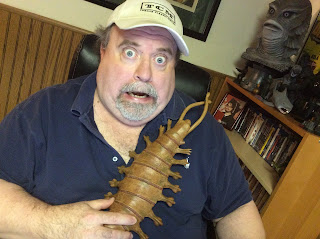 Three years ago, Patrick I recorded a podcast on our favorite Price films. You can find that here.