Thrills, Chills, & Spills: ABBOTT AND COSTELLO MEET THE CREATURE FROM THE BLACK LAGOON

Is this a fun collectable or big rip-off? You be the judge and jury!

I was overjoyed last January when I discovered that Nostalgia Family Video was putting out this disc, with fun cover art from Kerry Gammill. I ordered it immediately. I paid six bucks. I would have paid six bucks just for the empty case to display, but I also received the DVD, which contains Abbott and Costello’s performance on the Colgate Comedy Hour in a skit that features the real Ben Chapman in full Creature from the Black Lagoon suit, a promotional appearance that Universal Pictures sanctioned to drum up some publicity for the upcoming film. The sketch runs about fifteen minutes. The DVD includes the entire comedy hour, along with trailers for all the Abbott and Costello Meet… monster pictures AND all the Universal Creature films. 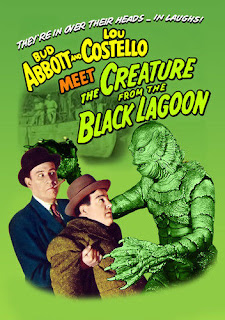 I was pleased with the purchase. Apparently, I know my Universal history better than some. Abbott and Costello met Frankenstein on the big screen first, went on to meet The Killer, Boris Karloff; then the Invisible Man; then Doctor Jeckyll and Mr. Hyde; and finally, the Mummy. They never made a feature film with the Creature from the Black Lagoon.

Where was I? Oh yes, apparently there are some consumers shopping Amazon.com for DVDs who 1) are unaware of the A&C Meet… history, 2) are enticed by attractive retro packaging, and 3) are motivated largely by price. Some sad Abbott and Costello fans bought this disc, thinking it was an undiscovered, feature-length comedy/horror hybrid featuring good old Bud and Lou. 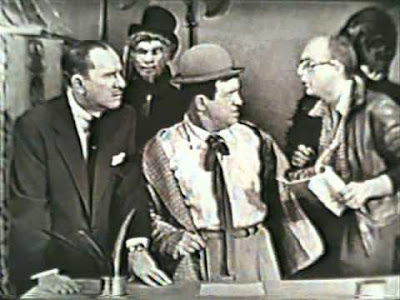 To wit: This is an actual review one Jeremy W. posted to Amazon.com: “I love Abbott and Costello a lot!!!! But this is false advertising!! I got my hopes up that there was an Abbott and Costello movie I hadn’t seen only to get what I feel as ripped off!! I would have paid $30 if it was a real movie and not a 5 min skit! Beware.... if your [sic] looking for a full length movie this is not it! […] this is all my disk says......Please eject disk.... playback feature may not be available on this disk..... But it’s the only one in the case.... very upset.”

I honestly feel sorry for Jeremy. Like him, I love Abbott and Costello “a lot!!!!” But what did he expect for six bucks? I know, I know—he says he “would have paid $30” for a REAL movie. But nobody asked him for $30. They only asked for six.

There follows in the review section a multitude of well-meaning consumers warning the other potential Jeremys (Jeremies? Jeremiads?) of what they will receive if, in fact, they purchase this six-dollar gem. Someone named Scot helpfully explains, “Be aware that this isn't really a movie but a short skit at the end of a '50s variety show, the Colgate Comedy Hour. The skit is funny, typical Abbott and Costello. The problem with this video is when the namesake monster finally appears on the screen, you get a bad section of the film just showing black streaks on the screen for about 20 seconds. This would be more interesting for people who enjoy ice skating as they dedicate about half of the show to Sonja Henie.” 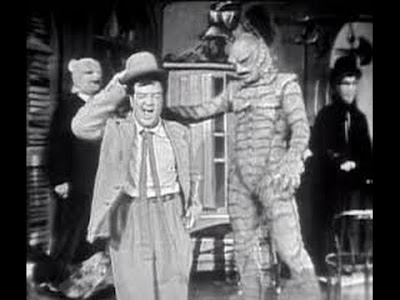 Exophrine (if that’s your REAL name) adds, “Just a heads up for you: THIS IS NOT A MOVIE!!! If you're expecting a feature film about Abbott and Costello running into the Creature from the Black Lagoon like they did with The Invisible Man, The Mummy, and Frankenstein...then you're in for a disappointment, This is not that at all. This is an episode of a variety show called The Colgate Comedy Hour. It features various sketches and they're funny enough on their own, but they're not billed as such. This packaging is VERY deceptive and isn't worth the disc it's burnt on.”

TANGENT: Amazon is now charging $6.68. I paid $5.99 earlier in the year. Even with this staggering 11.5 percent price increase, it is STILL WORTH IT. 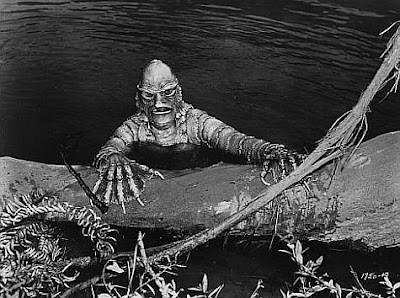 Would anyone like to borrow one? Happy Scary Movie Month!

CHILLS: 80%
(Real Universal Studios props and costumes in the background of the sketch)

SPILLS: 90%
(Costello does a few pratfalls.)