A Movie I'm Thankful For: THE LIFE AQUATIC WITH STEVE ZISSOU 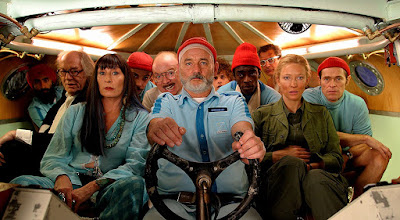 Wes Anderson’s fourth feature film was met with everything from indifferent eye-rolling to outright scorn when it was released in 2004, and it’s not difficult to see why. Maybe Anderson’s unique (though oft-copied) brand of indie twee-flavored Americana had grown stale at that point. After all, audiences can only sympathize with so many precocious children (or man-children) with absent fathers living in dollhouses, searching through binoculars for other children (or man-children) to whom they can hand-write letters while playing a xylophone. Anderson’s performative, artificial aesthetic bothers people. I get it. However, one of the things that makes The Life Aquatic with Steve Zissou such a standout in his filmography is the way it challenges those conventions. It’s easily the broadest, most cartoonish of Anderson’s earlier work (before he started making literal cartoons with Fantastic Mr. Fox), but it’s also the angriest and most vulnerable. For casting that sloppy, impotent rage into a wild watercolor of existential madness, The Life Aquatic is a film for which I remain eternally thankful.

Acclaimed oceanographer Steve Zissou (Bill Murray) is in a funk. His latest documentary, which chronicles the death of his best friend Esteban (Seymour Cassel) at the hands of the elusive jaguar shark, has been flatly rejected by the cultural intelligentsia upon its premier. As a result, funding for his next adventure (the hunt to kill said jaguar shark) has all but dried up. Though Klaus (Willem Dafoe), Wolodarsky (Noah Taylor), Vikram (Waris Ahluwalia), and the rest of his crew of misfits stand by their leader, Zissou’s estranged wife, Eleanor (Anjelica Huston) has finally had enough. She retreats to the summer estate of her ex-husband (and Zissou’s chief rival) Alistair Hennessey (Jeff Goldblum), setting Zissou adrift without a moral compass. To complicate matters further, journalist Jane Winslett-Richardson (Cate Blanchett) is tagging along to profile Zissou, and kindhearted pilot Ned Plimpton (Owen Wilson) - who believes himself to be Zissou’s illegitimate son – has joined the crew. Anxious to prove himself on what might be his last voyage, a defiant Zissou sets out to sea.

The Life Aquatic may seem like a mess for the first viewing or two, but its loose construction makes a bit more sense when we consider that the bizarre and colorful outer journey is meant to parallel Zissou’s much darker inner struggle with aging, loneliness, professional success, and legacy. “Let me tell you about my boat,” Zissou says, presenting a life-size cross-section of the Belafonte. The vessel has seen better days, but it boasts a sauna, library, editing room, laboratory, and deep-sea observation bubble. On the top deck sits a mini submarine (once called Jacqueline, but now called Deep Search). “What happened to Jacqueline?” asks Ned. “She didn’t really love me,” Zissou answers. “Let me tell you about my ship,” of course, really means, “let me tell you about my heart.” Zissou is laying himself bare. Hell, the engine’s guts and gears are literally exposed (“The bearing casings aren’t supposed to look like that, but we can’t afford to fix them this year”). The Belefonte is the instrument by which Zissou determines his destiny, and – absent the guidance and companionship of his mentor, best friend, and wife - it’s running on empty. 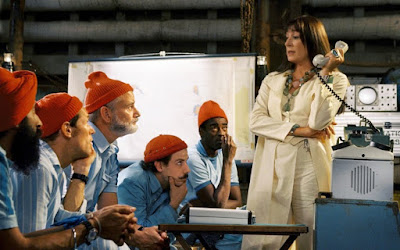 This vulnerability comes with a healthy dose of arrogant, homophobic, self-aggrandizing dickishness, of course, as Zissou struggles with authenticity and leadership skills. He’s so concerned with the narrative of his documentary (again, Anderson is pushing up against his own constructed reality) that he often fails to appreciate the human element of the adventure. This is what makes the journey to Little Ping so important: rescuing Hennessey and the Bond Company Stooge (Bud Cort) after his negligent navigation steers them into the hands of pirates allows him a kind of atonement. “We’ll give them the reality this time,” Zissou says after tumbling down a flight of steps. “A washed-up old man with no friends, no distribution deal, wife on the rocks, people laughing at him, feeling sorry for himself.” Fine, he says. I admit it. The hunt for the jaguar shark is a futile effort to conquer my own mortality. Though many dismiss The Life Aquatic as an overly whimsical, episodic, and nonsensical excuse for Wes Anderson to put Bill Murray in a funny hat, I find it to be a deeply moving rumble with grief and loss.

That’s why it works for me. That’s why I’m thankful for it. I like movies that use artifice and metaphor to explore emotional struggles. That’s the whole point, isn’t it? I think it’s okay that The Life Aquatic is messy and weird, even up its own ass a bit. Because I am, too. Like Steve Zissou, I obsess over my work and my legacy, over my personal relationships and my insecurities about fatherhood. I find it interesting that both movies I’ve selected for these Thanksgiving columns have been about death, loneliness, and existential frustration. I don’t think that means I’m a depressed or angry person (though I have my moments). Instead, I’m just thankful that I have movies to use as a filter to process my emotional breakdowns and moral conundrums. I share Zissou’s catharsis when, having finally traveled into that dark ocean trench to confront the jaguar shark, he asks, “I wonder if it remembers me?” I share that need for cosmic significance, the urge to look Death in the eye and have it look back at me with familiarity. I want to believe I mean something, anything, to the universe, and The Life Aquatic gives me hope.