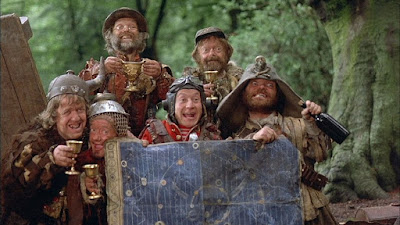 Few movies have had a bigger impact on me as a movie lover.

When I'm listing off my favorite movies or thinking back on the films I feel have really shaped my tastes, I rarely come up with Terry Gilliam's sophomore effort Time Bandits. I don't know why that is, especially when it's so clearly one of the most formative films of my early years. This was one of the first movies I can remember watching on cable over and over and over again. It's a movie that my siblings and I embraced fully, to the point that one of my favorite things to do was "play Time Bandits," which mostly meant jumping through open doors in our hallway and pretending they were doors to other times and places. This was one of the first movies I can remember claiming as our own -- not something our parents showed us or which seemed to be made for everyone, but something we discovered on our own and fell in love with for all the ways it was different from everything else we were seeing at the time. That last part is true to this day. There's no other movie like Time Bandits. 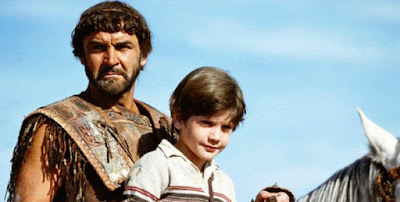 Kevin (Craig Warnock) is an imaginative 11-year old boy living in the suburbs of England with parents who ignore him completely in favor of television and whatever the newest household item is. While in bed one night, a group of little people -- the titular Time Bandits -- burst into Kevin's room, lost as they hop around time. It's revealed that they have stolen a map and are being pursued by the Supreme Being, taking the form of an enormous disembodied head that pops up to chase them (always accompanied by the same over-the-top choral score) and repeat "Return the Map!" They're also being monitored by Evil (David Warner), who wants possession of the map so he can remake the world in his own dark image. Kevin and the Bandits hop around from place to place, time to time -- including visits to Napoleon (Ian Holm), Robin Hood (John Cleese), King Agememnon (Sean Connery), and an ogre, his wife, and a giant -- while both Evil and the Supreme Being continue to grow closer in their pursuit. Time might be running out.

It's funny how, as a kid, I thought of Time Bandits as some well-kept secret between myself and my siblings, when in reality the movie was a pretty significant hit, grossing over $40 million on a budget of $5M. It even cracked the Top 10 highest-grossing movies of 1981, and, in the words of critic Drew McWeeny on his "'80s All Over" podcast, bought Terry Gilliam the rest of his career. This is one of the things I love most about the first half of the 1980s and the reason I began writing those "It Came from the '80s" column years ago: it was a time when the kind of wild imagination and fully committed fantasy of Time Bandits wasn't just commonplace, but profitable. A visionary like Terry Gilliam didn't have to scrape and claw to get a movie made or to battle with studios over every single aspect of the production, from the budget to the cut. That would have to wait until his next movie. 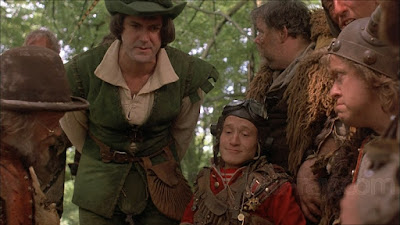 There's something about the movies we discover for ourselves that make them particularly special to us. It's one thing to read about a movie for years, only to finally track it down and see it, or to be shown a movie by a friend or a teacher with the context of it being something you "should" see. I've loved plenty of movies under both sets of circumstances, because a good movie is a good movie. When you see a movie in a class and are playing the part of student or appreciator, it's nice to love that movie because it means you "get" a movie that you're supposed to get. When a friend shows you a movie they think you'll love and you love it, it's nice because it means that friend "gets" you. But when you discover something entirely on your own, sometimes by chance, sometimes by curiosity, and then you fall in love with that movie, it's like the movie gets you. It's the feeling I chase every time I sit down to watch something new, or to revisit something I've seen with a new set of eyes. There's no substitute for that kind of a connection to a piece of art.

I was too young to understand it when I first saw it and fell in love with it, but that's what happened to me with Time Bandits. In fact, it might be the first such occurrence of this phenomenon I ever experienced. Here was a film that looked and felt like nothing else I was seeing at the time and which spoke to me on a completely different level, capturing my imagination in such a way that it chemically changed my brain. I would spend the rest of the '80s -- really, the rest of my life -- continuing the chase this kind of bold, gorgeously realized vision; this genre mashup that is part comedy (the script is by Gilliam and his former Python castmate Michael Palin), part fantasy, part science fiction, part horror film, part rumination on what it feels like to be a lonely kid who wants to lose himself in something other than his real life. 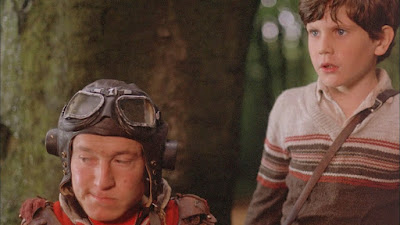 The good news is that the early 1980s were lousy with science fiction, fantasy, and horror movies (the kinds of movies that originally inspired the "It Came from the '80s" column that I never write anymore because I'm a washed-up hack). The bad news is that most were just imitations of what Time Bandits is able to do organically. They're copies of a true original. I'm an easy enough mark for even the imitators that I can find stuff to like in many of them, because even a movie that's trying to approximate imagination is bound to stumble into a few genuinely imaginative elements in the process, but Time Bandits sets a high bar to clear. I know his roots are in animation and Monty Python and I have not yet seen Jabberwocky (the Criterion Blu-ray is just out this week), but to me Time Bandits feels like the movie that would set up the rest of Terry Gilliam's career. Insanely detailed, garish, and wild production design? Check. Seriously, the work that Milly Burns and Norman Garwood and Jim Acheson do on Time Bandits is next-level insane. Just look at Evil's henchman, who spends the movie covered in a plastic tarp with a rhino horn on his head. What the fuck is that? It doesn't matter. It's an amazing visual and carries with it the same tactile quality that makes Gilliam's worlds feel so lived in and real. Is everything covered in seven inches of dirt and grime? Check. Lines blurred between fantasy and reality? Of course. Disillusionment in institutions? Destruction of icons? Yep. Kevin's parents are worthless. Robin Hood and his Merry Men are kind of assholes, punching people in the face as they pass out gold. Even the firefighter played by Sean Connery in the film's final moments -- whom we're meant to see as some sort of parallel reincarnation of his King Agememnon -- bails on a newly-orphaned Kevin with just a wink and a thumbs up. That's how the movie ends: Kevin alone, abandoned by anyone who is supposed to care about him, his home destroyed, the camera endlessly pulling back from his town, back from his country, back from Earth, back from our galaxy, reminding us just how small and insignificant we truly are. No wonder this spoke so directly to the six-year old me. It's a movie about the death of childhood, and I was such a depressed mope of a kid that my childhood was dead probably around the same time it started. The more things change, I guess. 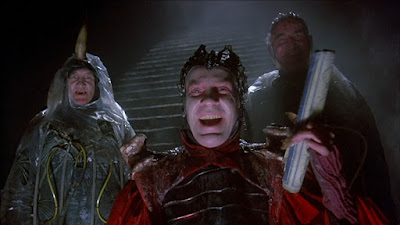 It should also be mentioned that one of the movie's executive producers is George Harrison, who released the movie under his HandMade Films banner, the company he started just to finance Python's Life of Brian. Of the roughly 35 movies produced by HandMade, Time Bandits was the most successful. I often tend to forget Harrison's involvement in the movie until his song "Dream Away" plays over the wonderful picture credits, at which point I am immediately a child seeing the movie on countless Saturday afternoons and only able to hear "Dream Away" if I'm lucky enough to catch another viewing of Time Bandits. Outside of the film's massive legacy on Gilliam's filmography and on my own life, I'm thankful for little memories like that. They help remind me just how special movies were and still can be at a time when everything is available at the click of a mouse and making an honest-to-goodness discovery for myself like Time Bandits is more or less impossible.

I'm writing this at a time of great uncertainty about myself and about my future as a writer. It's a weird, hard thing I'm going through. At the very least, Time Bandits helps put me back in touch with the experience of discovering a movie that was, at the same time, discovering me and becoming a part of my DNA. It connected my siblings and me in a way that no Thanksgiving dinner probably ever has or will, because that's the power of art. It stays with us and shapes our memories forever. My best friend Doug is not a fan of Time Bandits because it's weird and it makes him feel alone. In a way, I'm even thankful for that; for as similar as the two of us are in so many ways, the departure in our reactions to something like Time Bandits tells us both something about ourselves and about one another that we each implicitly understand. The movie makes me thankful for Terry Gilliam's career of maverick, visionary films -- even the ones I don't love -- and for the spate of fantasy films we got like it in the 1980s. More than anything, I am thankful for Time Bandits because I don't know if I would be the same movie fan without it.