There ain’t no tellin’ who you might meet working at the car wash.

Car Wash is essentially one of those “day in the life” movies that pop up from time to time. Sometimes those films depict a day in the life of a restaurant, or a record store, or an office building. This one shows a day in the life of a car wash in Los Angeles in 1976. There’s no plot. The car wash is not about to get bought by a rival car wash and no there’s no competition or dance-off at the end. The story doesn’t follow one particular employee, and there is no leader. This is an existential comedy about the lives of the men (and one woman) who work at the car wash, the customers who come into the business, and the characters who exist around the periphery. I adore this film. The characters that populate the car wash are lively and oozing with charisma, the tone is often charming without venturing too far into goofy, and the script is less concerned with individual jokes and more invested in producing an overall atmosphere. Car Wash was conceived as a musical, but Universal ended up steering this vehicle (you see what I did there?) toward the silver screen instead, and the movie never shakes its musical roots. This is also what I’d consider to be a “soft” Blaxploitation movie in that it has an awful lot of elements of Blaxploitation, but doesn’t fully commit in the way that many of those films do. In fact, it feels kind of like a hybrid of American Graffiti and the urban comedies of the mid-seventies. This is probably because it was written by Joel Schumacher--yes, THAT Joel Schumacher, the man who would one day direct D.C. Cab, St. Elmo’s Fire, and The Lost Boys, and was directed by Michael Schultz, whose filmography includes Cooley High and The Last Dragon, two Blaxploitation classics. The end product is a highly-commercial movie that feels a little bit safe, but is such a blast that I don’t mind. 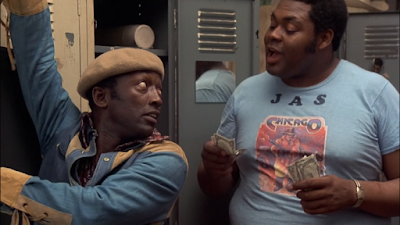 The biggest thing this movie has going for it is its cast. If you look at any of the modern DVD covers, marketing material, and even the thumbnail for this movie on streaming sites, it seems like Richard Pryor and George Carlin are the two stars of the film. In truth, neither actor appears in this movie for more than five minutes. Instead of those two comedy giants, the real star here is a huge ensemble cast. Rather than name all the actors that appear in this movie, I’m just going to point out a few. We have Otis Day (Animal House) and Garrett Morris (from the first cast of Saturday Night Live). Antonio Fargas, who played Huggy Bear on Starsky and Hutch and was a staple of seventies Blaxploitation, plays a gay transvestite who seems surprisingly accepted by his co-workers. This was Ivan Dixon’s (A Raisin in the Sun) final movie role, and it was the film debut for Bill Duke (Predator). Melanie Mayron, director of Mean Girls 2, plays the cashier and receptionist. Her character is heartbreakingly adorable, but also more than able to take care of herself among all this testosterone. There are MANY more actors in the cast with no one performer starring as the lead. There are also lots of recognizable faces in walk-on roles, and that’s part of the fun. Watch for Lorraine Gary, who played Ellen Brody in Jaws and two of its three sequels. Danny DeVito even shot scenes for this movie, but his stuff got cut. I mentioned that this movie feels at least partially like it was inspired by American Graffiti, and I think that’s probably the closest thing I can point to as far as the basic structure. Our characters all have their own cares and concerns, and we’re given short glimpses into the motivations of each one to show us what makes them tick. Some of these characters are happy and some of them aren’t, but they all come together at the car wash. The movie starts at the beginning of the day and we follow all the way up to when the employees punch out to go home. Personally, I would be happy to follow most of these characters for days. It’s a huge compliment to the movie that it leaves me wanting more. 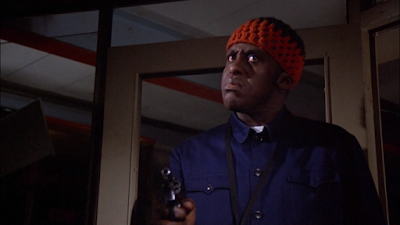 A lot of the guys and gals that inhabit the Dee-Luxe Car Wash are flawed in their own way, but that’s part of what makes me want to watch them. They bicker and argue and play pranks on each other, but they’re so entertaining and realistic that you can’t help but be drawn to this particular place in this particular time. Again, charisma. Movies like this one that feature a large ensemble cast and aren’t plot driven ultimately live and die by the kind of electricity that exists on screen. Without a McGuffin that spur things along, all the heavy lifting falls upon the actors themselves, and the characters have to work or the entire movie fails. This movie knows this, and it also knows how lucky it was to have such a great cast: at the end of the movie, a radio DJ (because music runs through the entire film, just like in American Graffiti) calls out each actor and their character’s name before the credits, just like we’re at a Broadway musical. I’ve seen lots of movies with cast montages at the end, but I’ve never seen one that had a narrator announcing each actor and who they played. It just adds to the fantasy. Even though this didn’t end up on Broadway, there’s no separating this story from the music, which is a character itself. The guy behind the film score is Norman Whitfield, a major player in the Motown scene who was a co-writer and producer for some of the best music of the last century. I’m talking about songs like “Ain’t Too Proud to Beg,” “Just My Imagination,” “I Heard it Through the Grapevine,” and “War” (What is it good for? Absolutely nothin’). Whitfield, along with the band Rose Royce, took the title song from this movie all the way to number one on the charts and earned a Grammy for best soundtrack in 1977. It’s a fantastic score and collection of tunes, and is almost as important as all the talented actors. I guess the music is disco, but it also has elements of soul, funk, and jazz. 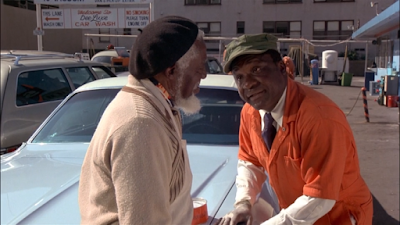 Let’s face it, studio-produced Blaxploitation movies are never as authentic or engaging as the ones done independently, and they often come across like executives chasing trends, which—to be fair—is usually what they are. Car Wash does occasionally feel a little tame and sanitized. After all, this movie is only rated PG when having Carlin and Pryor alone should have warranted an R. It’s hard to argue that this wasn’t watered down for maximum appeal. It’s also hard not to look at the multi-ethnic cast and the Broadway aspirations and not suspect that there might be some pandering going on.

But there are so many things that I appreciate about this movie. The music, the atmosphere, have I mentioned the cast? Plus, Car Wash seems to have some subtle things to say about racism and prejudice and equality in the workplace without beating its audience over the head with any of it. Different characters want different things, but the movie does take time to show that people can get stuck in a place they never thought they’d find themselves with no easy way out. There are no sermons, and the film only stops the fun momentarily to meditate on some heavier things, but there’s undeniably some substance beneath the funky antics. 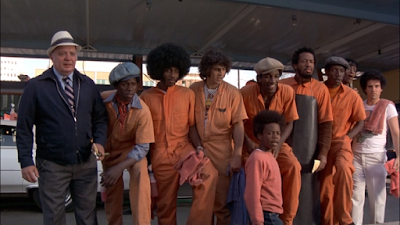 In the end, visiting this film is like visiting a time and a place that is largely gone, if it ever even existed. When I check in with the Dee-Luxe Car Wash, I’m able to hang out with some really cool and funny cats in a little hidden pocket of Los Angeles where the laughs keep coming and there are no problems that can’t be overcome through communication, a little hustle, and help from a friend. It may be a dive, but this is my kind of place.