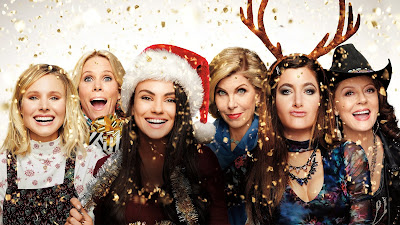 My love of bad Christmas movies has never been tested like it was with these two.

• Mila Kunis is fine in the dramatic scenes, but in the comedic ones she’s basically the person at a work meeting whose contribution is to only ask questions.

• Kristen Bell is there. I don’t know what else to say about her.

• Once again (like in Bad Moms), Kathryn Hahn is the funniest of the three, but that’s not difficult. She has the only laugh in the movie in a scene about waxing a butt crack. You know a movie’s bad when it’s most interesting moment is about the crack of someone’s ass being waxed. This movie is SO terrible.

• Will Ferrell is trying hard during the slapstick moments. He also oddly blends into the background in a movie where he’s a co-lead.

• Mark Wahlberg seems slightly embarrassed and trying to rush through the movie, which fits this film’s manic pacing and editing.

• John Cena has a smaller role as the father of Wahlberg’s step-daughter. He commits to the bit and is one of the few things in this movie that didn’t make me want to hold my head in my hands. 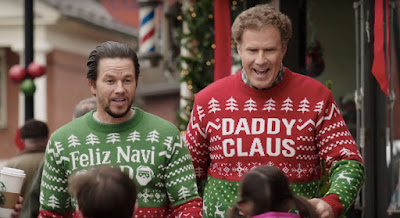 The Down to Earth Spouses/Significant Others

• Kristen Bell’s on-screen husband is there. I don’t know what else to say about him.

• Justin Hartley is a male stripper and the recipient of the holiday butt, dick and balls wax. The joke with him is that he’s a really nice person. The Magic Mike joke of it all wears thin.

• Peter Gallagher plays Mila Kunis’ dad. He is on hand to fist pump when they don’t have to see the 5-1/2 hour-long, sad Russian Nutcracker, fist pump again when there’s a male stripper at their Christmas dinner, and have a heartfelt speech at the end with Mila Kunis telling her it’s ok her mother is Satan because she’s just insecure so all is well! Fuck that noise.

• Linda Cardellini is adorable and the only normal person in the movie until a scene at the end where she calls her husband a snowflake so now I don’t like her.

• Alessandra Ambrosio in on hand to shoplift and write in a notebook so Linda Cardellini can be flustered not knowing what Ambrosio is writing in her notebook. I hate this movie. 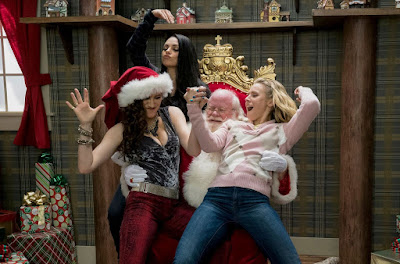 • Christine Baranski plays Mila Kunis’ mom and a cartoon. She is an alpha mom, takes over Christmas, is mean to her daughter, racist towards Jay Hernandez repeatedly and throws around the word “Jews” like we’re aliens because that’s funny in 2017. I hated this woman so much.

• Cheryl Hines is Kristen Bell’s mom and certifiably insane. She is stalker clingy and annoying and jokes about having cancer because that’s funny. I hated this woman so much.

• Susan Sarandon is Kathryn Hahn’s pothead mom. She was a roadie for REO Speedwagon and now stands outside of a grocery store stealing people’s food by saying it’s for a canned food drive. Her name is Isis because that is a joke in a movie from 2017.

Note: The movie sets up this fucking trio like they’re going to have their own spin-off movie in Vegas (where they are plotting to go for New Years to see Wayne Newton). I dare them to make and release that movie. Nothing brings butts in seats like Baranski and Hines! What is wrong with them? P.S. It’s very weird that A Bad Moms Christmas sets this up like the original, popular trio is no longer good enough.

• Mel Gibson is basically a lead in this movie playing Mark Wahlberg’s dad. He really dives into his performance, which I guess should be commended under normal circumstances. However, his off-screen baggage torpedoes every scene, bringing an unsettling undercurrent to this family movie. He’s misogynistic, bullying and laughs when others get hurt because 2017. His redemption is not to change but for everyone else to accept him for who he is. Because also 2017.

• John Lithgow is playing Cheryl Hines in this movie. He’s overly protective and affectionate and still asks his grown song if he needs to make “tee tee” (i.e. go to the bathroom). He also gets the dramatic arc of the movie since he’s secretly divorced from Will Ferrell’s mom. Whatever.

Note: The movie sets up this duo is going to Vegas for New Years for their own adventures – most specifically getting Lithgow laid (with Gibson as his wingman) at Caesar’s Palace.

Winner: Ugh. I don’t know. Baranski/Gibson cancel each other out. So do Hines/Lithgow. I guess Daddy’s Home 2 wins because Sarandon’s name was picked out to make light of a terrorist organization. All you had to do was not name Susan Sarandon after a terrorist organization and you would have had that point, A Bad Moms Christmas! 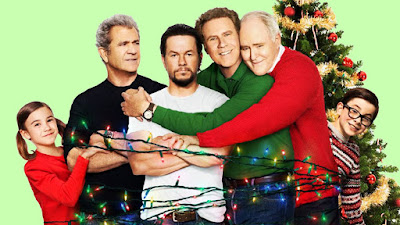 • Mila Kunis’ kids don’t really do anything other than accept expensive gifts from their grandmother (Baranski) and complain that their racist gam was kicked out of the family by their mom late in the film. You see, they like their racist grandma since she’s not racist to them. That part pissed me off because Kunis is so in the right for doing that and these little brats aren’t backing up their good mom. P.S. Why are they still considered “bad moms”? Kunis, Bell and even Hahn in this movie are good moms mostly.

• Kristen Bell’s kids are there. I don’t know what else to say about them. They look like Dax Shepard’s kids.

• Kathryn Hahn’s son has an Australian accent even though he lives in Chicago with his mom and not his father, who I’m guessing was Australian. Because accents are genetic?

• Mark Wahlberg and Linda Cardellini’s son has a subplot where he likes his stepsister (the other characters don’t know this until the end) and he ends up kissing her and slapping her on the ass because that’s funny? He also bowls without bumpers and gets a score of 1.

• Their daughter turns out to be Damien in The Omen. She gets drunk (in the only funny moment in the movie she keeps yelling about how she wants pancakes from IHOP…and then I realized I’m laughing at a drunk child and felt bad), she also shoots and murders two birds with a gun and brags about it.

• John Cena’s daughter (Wahlberg’s step-daughter) is on her phone all the time and, in a long scene and running joke, likes to crank up the thermostat to 85 degrees when no one is looking.

Winner: Daddy’s Home 2, because the actress playing the drunk child has good comedic timing. Ugh. Is this column almost over? 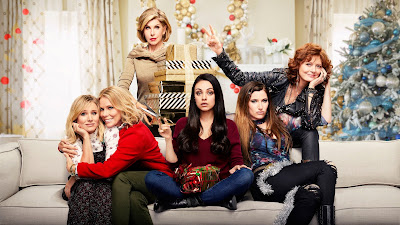 • There’s a good amount of materialism, with lavish spending on Christmas decorations, parties, gifts like Xbox/iTunes gift cards/seasons of The Walking Dead, etc.

• We get a sequence set at a kids gymnastics place where there is not one but two full-song montages set to party music.

• Kenny G has a cameo where he says “fuck” (because he’s not supposed to do that, so he’s bad too) and holds his saxophone between his legs and pretends it’s a dick.

• I think the movie is shot hand-held at times, giving it a Children of Men vibe for no apparent reason. It’s weird.

• There’s an AWFUL end credits cast dance party which is like they are unaware they murdered your entertainment the past two hours. At least it’s on brand.

• Product placement for Airbnb because why set a Christmas movie at home when you can talk about how Mel Gibson’s a hero for booking a dream vacation on his phone?

• Will Ferrell cuts down a cellphone tower (thinking it’s a tree) and then the family uses it for their Christmas tree.

• The movie closes with the whole cast snowed in at a movie theater on Christmas Day. The power goes out so all the main cast and extras go out to the lobby and the world stops so everyone can see the lead characters work out their problems like assholes. There’s a giant group sing-a-long and tons of jokes about the Band Aid “Do They Know It’s Christmas?” song (which is about famine relief, but instead is being taken back in Daddy’s Home 2 and now about being an asshole), movie theater employees playing instruments/singing/throwing free concessions to the crowd, and a mistletoe joke with Wahlberg/Cardellini’s son where there’s a line of girls to kiss the little boy but also one boy wants to kiss him too and he winks to the camera! Because let’s make fun of a child who is gay??? WTF. It’s embarrassing. 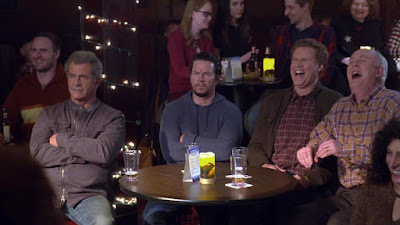 The Verdict: Both movies achieve impressive feats. Daddy’s Home 2 has the worst scene I’ve ever seen in a movie. A Bad Moms Christmas is the worst movie I’ve seen all year. So, I give the edge to Daddy’s Home 2. Don’t see either. Even by bad Christmas movie standards, these are abominations.
Posted by Patrick Bromley at 12:00 PM