I guess we can all stop hoping that Edgar Wright will finally make a musical. Turns out, he did!

I am sure I’m not the first to say that Baby Driver, Edgar Wright’s paean to 1970s heist films, is actually a disguised musical. The title character is never without his handy iPod; every heist and getaway is scored and edited to the rhythm of a popular song (in one sequence, the characters’ automatic weapon bursts are synced to the horns of the song “Tequila”), and the opening credits seem like a lost MGM musical number with only slightly less dancing. 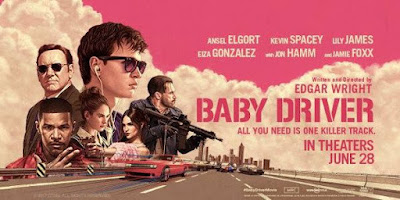 The Plot in Brief: Baby (Ansel Elgort) has gotten himself into a pickle. Full of the rambunctiousness of youth, he stole the wrong car and is now forced to work off his debt by acting as wheelman in a series of increasingly brazen robberies. His colorfully-named criminal conspirators include Griff (Jon Bernthal), Buddy (Jon Hamm), Darling (Eiza Gonzalez), Bats (Jamie Foxx), JD (Lanny Joon), and No Nose (Flea). The robberies are masterminded by skeevy criminal Doc, played by skeevy criminal Kevin Spacey.

Baby meets a diner waitress, Debora (Lily James), and falls in love. One of the heists goes bad. Can Baby extricate himself from his life of lawlessness?

Here’s the problem. When the film was released earlier this year, I heard lots of huggedy-buggedy from disappointed fans. Could it be that after four homeruns—four perfect films in a row (yes, I said it)—Wright had delivered a solid double? What is good in Baby Driver is very good indeed, but whenever its characters are not behind the wheel, the film founders. The dialogue is either banal or too clever by half. All of the actors but one shamelessly overact. The narrative is nothing we haven’t seen before. Every scene not involving a car chase seems to come from its own, different movie. 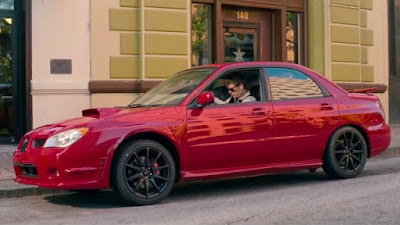 Things I like: The chase scenes are amazing, and it’s worth it to screen Baby Driver just to be impressed by its editing expertise. Am I alone in wishing this film featured one or two MORE car chases? Damn. The chase sequences are this film’s reason to exist, so I was a little disappointed that the final one takes place largely on foot. Maybe writer/director Wright was just trying to mix things up, but given the film’s obsession with speed and slick driving, I also wished the climax involved the open road and not two cars going mano a mano (llanta a llanta?) in a parking garage.

Things I do not like: In Baby Driver, Edgar Wright’s patented brand of film fandom gets a little out of hand. Ansel Elgort bopping through the opening credits sequence, passing graffiti of the song’s lyrics, is a little much. Darling informing all of us that we all have to watch out when her lover, Buddy, “sees red,” only to have Buddy bathed in hellish red light at the film’s climax, is sophomore film school foreshadowing. For some reason, Ansel Elgort is dressed like Han Solo in Star Wars. Doc delivers a long monologue about a heist while drawing on a blackboard, and then ACTUALLY POINTS OUT TO EVERYONE how hard it is to talk and draw a good picture at the same time. The film sometimes leans too hard into its own meta-ness. 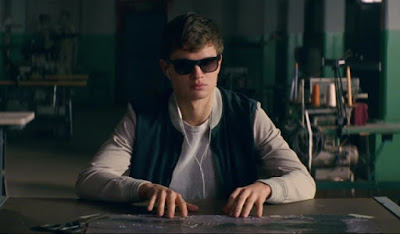 Things that bored me to tears: Most of the material not involving a car chase, much of which seems imported from other movies; Ansel Elgort’s JC Penny mannequin performance; Lily James’s performance as Debora (although to be fair, she isn’t given a lot to work with); and the “Deaf Foster Father Subplot,” which seems flown in from an early 1970s Disney family movie, perhaps titled Escape from Spacey Mountain.

Has anyone else pointed out that, except for the car chase stuff, Baby Driver resembles a film by David Lynch? We have the ragtag bunch of criminal mopes from Blue Velvet and Wild at Heart. We have the obsession with coffee and diner culture from Twin Peaks. Every time Baby and Debora share the screen together, the film seems to time hop back to the more innocent 1950s, a trope used in both Blue Velvet and Twin Peaks. I kept half-expecting an after-credits sequence showing Debora giving birth to the mutant baby from Eraserhead! 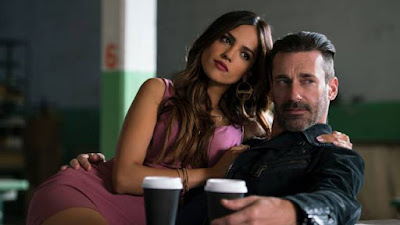 In the spirit of classic MGM musicals, though, perhaps I am being too hard on Baby Driver. According to the Wikipedias, it is Edgar Wright’s highest-grossing film, so he will be allowed to continue making films. That’s good news! I enjoyed watching it when it was released. I enjoyed watching it again at home. I will probably watch it again, but perhaps just the chase sequences. I am not the biggest fan of Jamie Foxx but quite enjoyed his performance here. I am a big fan of Jon Hamm, and I love his work here, including a blink-and-you’ll-miss-it reaction shot during the opening chase where, in a split-second, Buddy figures out what Baby is really doing and heartily approves. I wish Jon Bernthal were in this movie more. I wish Kevin Spacey were in it less. 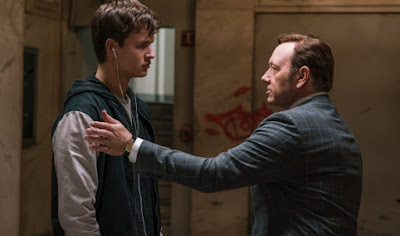 Thrills: 100%
(Car chase sequences that stand up to the best of them.)

Chills: 75%
(Little of the menacing suspense material works. The character of Doc has a final act change of heart that is simply unfathomable.)

NOTE: My second viewing of Baby Driver was on a new 4K Blu-ray disc. For reasons my lovely wife claims to simply not understand, I recently upgraded my home system to 4K. Those bastards at Sony must know that once they sell you a goddamned 4K TV, the completists among us will need to fill it with actual 4K content. I was an early adopter of 4K television (Because, you know, we got that new couch, and so we had to get a new TV to match. Seriously, that’s how everyone does it. Honey, I swear.) I remember the first time a kindly Comcast employee visited my house to fix the cable (a biannual event where I reside)—he noticed the new TV and wittily inquired, “How the hell did they ever talk you into buying THAT THING?”

“How the hell did they talk you into taking this job as a CABLE GUY?” was my amusing riposte.

On the whole, I am happy with the 4K upgrade. I wish there were more older films available in the format, but isn’t that always the case? I recall that when Blu-ray disc was first introduced, content providers reasoned that us plain folks would not have the new players in every room, so they selflessly included a “regular” DVD in the package. Now, every 4K disc I have purchased also includes a “regular” Blu-ray disc, plus a “secret code” redeemable for a tablet- and phone-friendly digital copy. How can Sony afford to be this generous?

The 4K upgrade in picture quality varies by title. Clearly, when there is more than one factor in play in the re-mastering and production of these new discs (the age of the film, the state of the original materials, the participation of the filmmakers themselves, etc.) one can expect a wide variation in the finished product. I have now watched 12 titles in 4K. 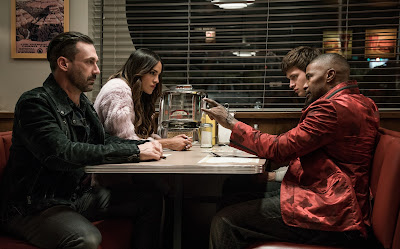 Baby Driver is one of the best looking of the bunch. Baby’s Mustang in the film’s opening sequence is deep red; in 4K it is the most red of all the red that has ever been red on my display device. Red. The transfer is flawless—sharp and steady with incredible detail. Bridge on the River Kwai, too, is an outstanding transfer, probably one of the best looking transfers I have ever seen on a home screen. Compared to the dark days of VHS (or “fuzzy vision” as a fellow laser-disc-collector friend of mine used to call it) the 4K Blu-ray is ludicrously pristine with sharp, accurate colors and shots that have so much depth to them, you think you are watching in 3-D. The Mummy shines in its 4K presentation; I am very familiar with that film, and the new 4K transfer absolutely outshines its previous Blu-ray incarnation. I sometimes pinch myself that I remained alive long enough to see such quality in home video presentations. Of course, this is from a kid who used to show 8mm films projected onto a bed sheet in his basement.

Discs I’ve seen that show only an incremental improvement over their previous incarnations include La La Land, Goodfellas, Independence Day, and Close Encounters of the Third Kind. I actually thought that last title looked better in 4K on my home screen than a recent anniversary theatrical screening.

With other films, the difference is far less noticeable. Bram Stoker’s Dracula looks the same as the Blu-ray disc, so does Cabin in the Woods and the original Ghostbusters. I do not know if this is a result of a lazy transfer or if it simply speaks to just how good those original Blu-ray discs were. This might be a case of my wallet affecting my eyesight, but regular DVDs and Blu-ray discs tend to look better when played on the new 4K machine. I can either chalk this up to wishful thinking or the fact that all technology marches on, and the new player is a few years younger and “fresher” than my old one.

Guardians of the Galaxy director James Gunn authored an amusing series of tweets a few weeks ago, where he described going through his parents’ house and turning off the “motion smoothing” feature on all of their televisions. Motion smoothing (which also goes by names like "Motion Flow," "Auto Motion," "Smooth Motion," and "Clear Frame”) is a process in which the display unit doubles the frame rate by creating virtual frames that do not really exist. This gives the resulting picture a smooth, video quality that many find quite unnerving. When objects are in motion, this smoothing tends to create an odd effect where the speed of the camera seems variable. Some people call it the “soap opera effect;” James Gunn calls it “Satan’s Spectacles.”

The first thing I did when I hooking up my new 4K equipment was to turn this feature off.