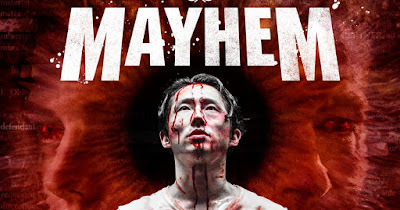 This is the movie you're going to watch every time you have a bad day.

When MGM released The Belko Experiment earlier this year, I was concerned it was going to step on Mayhem, the new movie by director Joe Lynch, by virtue of being the first "office horror" movie out of the gate. That didn't happen for a couple of reasons. First, Belko failed to make much of an impact either culturally or at at the box office despite being a pretty well-made horror movie. More importantly, though, is that the movies share very little in common aside from their "trapped in a workplace" setup. Belko is a horror movie that happens to be set inside an office building; Mayhem is a movie about working in an office and how corporate culture beats us down day in and day out until we're ready to explode. 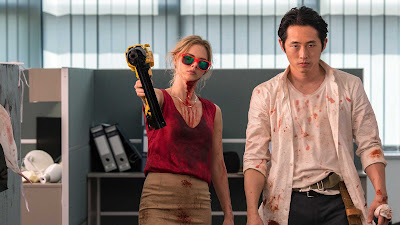 The Walking Dead's Steven Yeun plays Derek, a mid-level attorney at a giant firm who both dreams of climbing the corporate ladder and is also despairingly aware of his place as a cog in an awful machine. He's having an especially bad day. A woman, Melanie (Samara Weaving), comes to the office seeking help saving her home, but Derek is either unable or unwilling to help her. He's being set up to take the fall for a multi-million mistake that's costing him his job. And, to top it all off, the building has just been placed under quarantine thanks to an outbreak of the "rage" virus, a non-lethal illness that removes all inhibitions and causes the infected to act with increased aggression, libido, you name it. Derek and Melanie has only a matter of hours to fight their way to the top floor and make some permanent changes before a vaccine is administered and the virus wears off.

As someone who has been a longtime vocal fan of director Joe Lynch -- he's one of my favorite people working in entertainment today -- it's thrilling to say that I think Mayhem is probably his best film to date. It combines the dazzling technical precision and visual daring of Everly with the anarchic glee of "Zom-B Movie," his insane segment from the anthology Chillerama. It feels like the culmination of what we can call a "Joe Lynch movie" in that it's funny and violent and wildly energetic -- the kind of movie that requires multiple viewings just to appreciate all of the gags taking place in the background or around the fringes of the frame. But the movie is not just some exercise in chaos, either; instead, it's deeply rooted in the very real character and the very real crisis of conscience experienced by Derek. His frustrations with work and how his career has come to define his life feel deeply personal, and for as much violent chaos as Lynch orchestrates on screen, it's still easy to feel his connection to this material. He's working through every bad job he ever had. All of us are. Despite its high concept, that's what makes Mayhem so relatable. 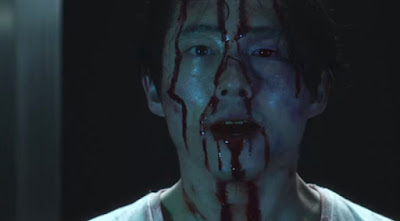 Besides being further proof that Joe Lynch should be handed the keys to some major big-budget shit (I'm happy with what he's doing on smaller budgets, but would love to see him play in a sandbox of unlimited resources), the best thing that's going to come out of Mayhem is, I hope, that it turns Steven Yeun and Samara Weaving into movie stars. Yeun is already beloved by many a genre fan for his work on The Walking Dead, making a character who was pretty thin on the page into someone who deserved the status of "fan favorite." He's got a difficult job in Mayhem, selling both a kind of everyman niceness that's part complicit drone and part simmering rage. Yeun grounds the insanity of the material at every turn so that even when some of the supporting performers go a bit too mustache-twirling big with their characters, Yeun never loses our sympathy, never lets us doubt the reality of the situation. And while many horror fans will recognize Samara Weaving from her performance in the recent Netflix film The Babysitter, I'd argue that Mayhem is a much stronger showcase for just how great she is. She's funny and charming in The Babysitter, but also the object of McG's leering camera and sexualized as the fantasy of an adolescent boy -- a lazy screenwriter's construct of the "dream girl." In Mayhem, she's again charming and hilarious but also a total badass and steals every scene in which she appears. She has a way of approaching her every line of dialogue in a way that's never what one might expect, and her ability to keep every moment fresh and surprising is like a kind of magic trick. 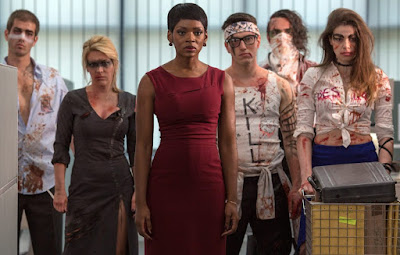 Mayhem is a blast. Part action movie, part dark comedy, part satire and with some strong elements of horror (much of the film is told in the language of a zombie/outbreak movie), it's a bunch of genres thrown together and filtered through the lens of Joe Lynch, who is able to make the movie feel incredibly loose and out of control while at the same time holding tight on the reins, never allowing the tricky tone or the on-screen madness to spin out of control or get the better of him. We've all felt frustrated at work or hated our jobs. Mayhem doesn't just give a voice to those frustrations, but also a nail gun and a pair of scissors and the righteous fury of our own two fists. It deserves a spot on the shelf alongside Office Space for movies you turn to for catharsis every time work sucks. And let's face it: work sucks. Mayhem doesn't.

The movie will be available exclusively on Shudder in early 2018, but don't wait until then. Rent it or buy it now so that Joe Lynch gets to make many more movies.
Posted by Patrick Bromley at 12:00 PM