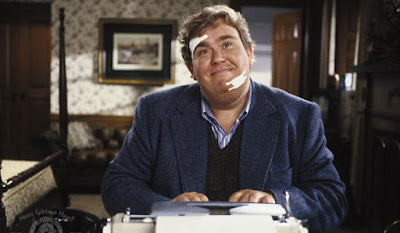 Delirious is a warm hug of a movie. It's not the funniest comedy in history and is more likely to elicit smiles and chuckles than full guffaws, but it has a heart and a goofball attitude that has been overlooked the last couple of decades. That needs to change – more people need to know the joy of Delirious. I’m hoping that with a bit of a push from me via this article, people will check out this movie!

Delirious came out in 1991 and was directed by Tom Mankiewicz. The central premise is that Jack Gable (John Candy) is a writer for a terrible soap opera who, after an accident, awakens to find himself in that world. A positive aspect of Delirious is that it wastes no time in tossing Jack into the world of his creation and forcing him to interact with Ashford Falls (the town in his soap). Everyone around him acts as they would in a soap opera – with constant schemes, over-the-top dramatics, and repeated music stings. Jack wants to get out of this world as quickly as possible until he realizes that as the writer of the show, anything he writes in this world comes true. It is not long before he has turned himself into the dashing new man in town who has money and power.

Jack’s primary goal is to save the life of Rachel Hedison (Laura Claybourne in the real world of the movie) played by Emma Sams, a character that he knows the producers want to write off the show. He is in love with Laura and believes that if he gives her what she wants behind the scenes of the show, she will fall in love with him as well. By writing himself as a character that makes women swoon and men froth with jealousy, Jack believes that he can seduce Laura in the role of Rachel in the world of the soap. The movie continues from there – Jack writes himself as the hero, but continually has to contend with the twist and turns of a soap opera world. He frequently forgets to write himself through the end of scenes, causing him to have abilities that tend to only last for a little while before he is normal, and slightly bumbling, again. John Candy plays the role as well-meaning, with a bit of an ego trip from the power. 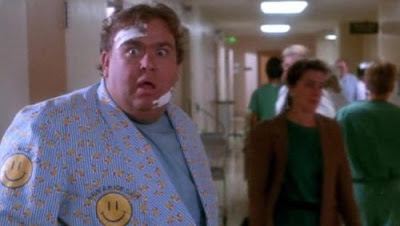 As excellent as John Candy is in Delirious, the real MVP of the movie is David Rasche. Rasche plays Dr. Paul Kirkwood in Ashford Falls and the actor Dennis in the real world. Everything that Dr. Kirkwood says is gold. His every line reading is perfect as he most embraces the soap-operatic acting. Dr. Kirkwood's best reactions occur any time he sees Blake Hedison played by Dylan Baker. Blake is slowly being poisoned by his sister Rachel (remember this is a soap opera!) and Dr. Kirkwood knows what is happening, but cannot tell anyone. He can only gasp and provide fantastic facial expressions. The biggest laughs -- full laughs, not only chuckles -- come from the Kirkwood scenes. I would dare anyone to watch the Heimlich Maneuver scene without laughing. If you don’t laugh, don’t tell me – I hate losing!

I wish I could describe everything I love about Delirious in this article, but that would give away too much of what makes the movie so enjoyable. Instead, I would like to give you what I will refer to as Robyn’s Ramblings – notes that I made during my most recent watch. If you haven’t yet seen Delirious, please check out my ramblings below, and then go and watch the movie! 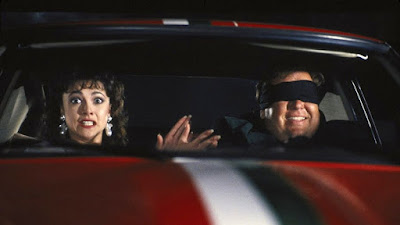 • The intro song is Prince’s “Delirious” - this is a great song, and if you don't like it, we can't be friends.

• The aesthetic and fashion are peak '80s, despite being released in 1991. Big hair and big shoulders.

• Jerry Orbach plays one of the producers of the soap opera. He is always great.

• Kirkwood and his facial expressions give me life.

• Candy is friendly to Janet (Mariel Hemingway), even when not pursuing her. 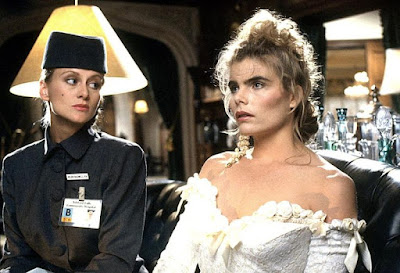 • Janet is the most natural of the soap characters, but she is also the least interesting.

• Blake and the reactions to his medication – from gum bleeding to neck growths and everything in between.

• The soap characters recognize that things are weird when Jack writes new scenes, but can't control it.

• "You're a business person; you're a busy person. You have hostile takeovers to take over."

• The drunk typewriting and Party scene

• Ty Hedison and his… what’s the word? Oh right, AMNESIA.

• The best scene in the movie – Heimlich Maneuver.

• The random dance scene is odd.

• This movie is so wonderfully weird.

• "Of course you're in love with her, she's your sister."

• Why is Rachel British?