Mel Brooks could have made any movie he wanted in 1976. His previous two films, Blazing Saddles and Young Frankenstein had both been box office hits in 1974, and his brand was at an all-time high. Maybe it’s not surprising that he cashed in all that movie credit to make a silent movie about the making of a silent movie.

The humor of Mel Brooks can be divisive. Not in the sense that it’s overtly offensive or anything; instead, I mean that it’s from an older school of comedy than most of us grew up with and can be hard to find relatable. Brooks comes from the “take my wife, please” era of jokes, and for me, at least, it requires a little adjusting. I grew up in the era of Spaceballs and his later comedies like Robin Hood: Men in Tights, and a lot of the jokes in those movies never hit me like I wished they had. I didn’t even develop much of an appreciation for Blazing Saddles and Young Frankenstein until well into my thirties. A lot of the time, I look at Mel Brooks and admire him for the chances he’s taken and for his prolific career, but not necessarily for his jokes.

Having said all of that, I think Silent Movie is VERY funny. Plus, the fact that it even exists is amazing, proving that Mel Brooks has balls. Here’s a guy responsible for two of the bigger comedies of the seventies, an Oscar winner for The Producers, a creator known for his jokes and quick banter, and he decides to make a movie with no dialogue. Furthermore, he casts himself as the lead actor for the first time in his career, putting an awful lot of the success or failure of the movie squarely on his own shoulders. 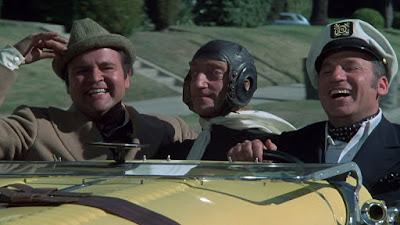 The plot in brief: Mel Funn (Brooks) is a director whose career has been derailed by his alcoholism. His only shot at redemption is another big hit, so he pitches the idea of a silent movie to a studio executive (Sid Caesar) whose studio is on the verge of bankruptcy. An industrialist company called “Engulf and Devour” is circling the studio like a vulture, waiting to purchase it if they can’t produce a hit that bails them out. With the project greenlit, all hope now lies in the creation and success of a silent movie in the 1970s.

Mel Brooks takes some pretty big risks here creatively, but they pay off. For all his toilet humor and dad jokes, Brooks is crazy like a fox. By making a silent movie that’s about the making of a silent movie, the story unfolds on two separate levels, including a meta one. This was a huge risk, and one that I think can’t be applauded enough. Plus, how about the fact that he actually created a silent movie more than forty years after the last one had been produced in Hollywood? Over the course of 87 minutes, a total of ONE WORD is spoken during the film and—of course—that one word is the payoff for a joke. Novelty aside, this is a huge achievement, and one that Brooks really nailed. And most importantly, the movie really works. A big part of this success is a recognizable cast that Brooks fans already knew. Filling out the leads alongside Brooks are Marty Feldman, the wild-eyed actor who Brooks had directed in Young Frankenstein, and Dom Deluise, an actor who seems to have been one of Mel Brooks’ muses based on his frequent appearances in the director’s films. This trio jokes, deadpans, mugs, and pratfalls their way all through the film and do a lot of the heavy lifting. Sid Caesar, as the movie studio chief, is also clearly one of the boys. Bernadette Peters appears about two-thirds into the movie and becomes another of the main cast, a femme fatale billed as “The most seductive creature that ever lived.” Like Madeline Kahn in Young Frankenstein, she fits right in and holds her own. 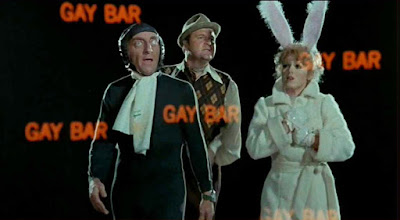 In the movie, the director is looking for contemporary stars to be in his film. This allows Brooks to fill his production with cameos from Hollywood’s hottest talents of the day. Burt Reynolds shows up in the first of two movies he made in 1976 about silent film (the other was Nickelodeon), playing himself and very clearly having an absolute blast. James Caan flexes his comedic muscles and shows he doesn’t take himself too seriously (his trailer is plastered with glossies of his own head shots). Paul Newman turns up, and so does Liza Minnelli. Mel Brooks even has his wife, Anne Bancroft, get in on the action. I can only imagine how much fun it would have been to see these celebrities embracing their inner goofball in ‘76. It had to have been refreshing to see a bunch of dramatic actors at their pinnacle like Paul Newman and James Caan in absolutely ridiculous circumstances.

Like most Mel Brooks movies, the comedy relies on different bits and gags. Some of them (a lot of them) are bound to miss, but Brooks and his co-writer, Ron Clark (Revenge of the Pink Panther) throw so many of them at the viewer that at least a handful of them are bound to hit home. Brooks also wisely remembers the rule of three, meaning that jokes can be used three times before they aren’t funny anymore. My favorite recurring bit involves a newspaper delivery that gets funnier every time I see it. There’s a wide variety of comedy styles represented, including slapstick stuff like pratfalls, but also some clever sight gags that look like they were improvised. Brooks even throws in some surrealism and high-concept gags. Have you ever seen a can of Coca-Cola hurled like a grenade? Mel Brooks wants to make sure you do. God bless him. 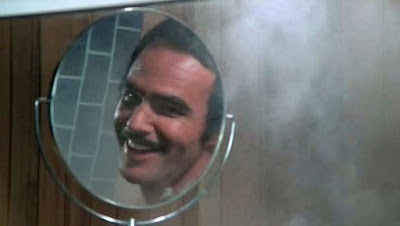 Besides the movie being a huge risk, it’s also a story that has a lot of teeth. Brooks is clearly taking potshots at just about everyone here, including big movie studios like 20th Century Fox, who released this film, and the corporate money-hungry attitude that studio executives seem to exhibit. The name of the studio he sells his idea to is “Big Picture Studios,” and their tagline is “If it’s a big picture, we’ve made it.” Likewise, Engulf and Devour, the greedy industrialist company, is clearly a thinly-veiled representation of Gulf and Western, a company that was buying movie studios at the time despite having no artistic or creative interest whatsoever. Brooks even pokes fun at the stars who give cameo appearances. Burt Reynolds’ house has his picture and name written on the side of the building, and Reynolds himself showers in front of a mirror.

Lastly, the movie works because it is, in effect, a well-crafted silent movie. Brooks clearly understands the necessary pacing and flow of a silent movie versus the ones that were being made in the 1970s, and his film, though in color and not in black and white, absolutely feels like it could have been made in 1916 instead of 1976. I detect an appreciation and a reverence for the works of silent comedy greats like Chaplin, Keaton, and Lloyd. This is something I didn’t understand when watching Spaceballs or Dracula: Dead and Loving It when I was a budding movie enthusiast all those years ago: for all the jokes Mel Brooks puts into his movies, he’s also a student of film itself. His movies are steeped in the traditions (which he often undercuts) of old Hollywood, implying a deep connection and affection for the stuff he chooses to lampoon. The guy who made Young Frankenstein clearly spent countless hours watching the old Universal monster movies over and over again. The guy who directed Blazing Saddles was steeped in the cowboy pictures of the ‘30s, ‘40s, and ‘50s. Likewise, the man who brought Silent Movie to life clearly has a deep love and understanding of silent film as an art form. 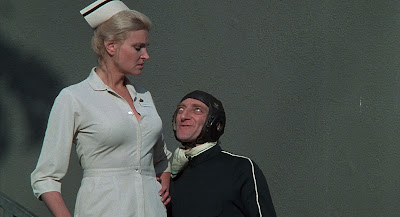 Silent Movie doesn’t seem to get the same level of appreciation as a lot of the other films from Mel Brooks, but I think it should. Maybe it requires slightly more of us as viewers, since there’s no spoken dialogue, but it makes sure that we’re more than compensated for coming along on Mr. Brooks’ wild ride. The movie is very funny, but it’s also inclusive. The world within this film is a recognizable one, but also one that is completely turned on its ear. Like the cartoons of Warner Brothers from all those years ago, it’s a rubber reality that Brooks lives in, and we’re all just lucky to be able to tag along.

Read more of Heath Holland's writing at his blog Cereal at Midnight!
Posted by Patrick Bromley at 5:00 AM