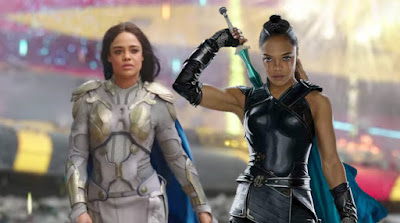 The review duo who are healthy now but sometimes get thor throats.

Rob: And I’m Rob DiCristino. The seventeenth film in the Marvel Cinematic Universe™ Is Thor: Ragnarok. It stars Chris Hemsworth as the titular God of Hammers, Cate Blanchett as Hela, Goddess of Antlers, Tom Hiddleston as Loki, God of Unresolved Paternal Angst, and Mark Ruffalo as The Incredible Hulk. On this adventure, Thor returns to Asgard to find Loki posing as Odin (Anthony Hopkins) and lounging on his throne while the Nine Realms fall into chaos. Thor retrieves his father, who tells him and his brother that Hela will soon return from exile to unleash an apocalypse on their people. She does that (destroying Mjolnir while she’s at it) and the Odinsons wake up on Sakaar, a chaotic planet ruled by The Grandmaster (Jeff Goldblum). The scavenger Scrapper 142 (Tessa Thompson) captures Thor, forcing him to fight Hulk, who’s been living on Sakaar the last two years as Grandmaster’s champion gladiator. Thor must escape Sakaar and assemble a team of warriors who can stop Hela before she destroys Asgard forever.

The funny and colorful Thor: Ragnarok is sure to be a top five Marvel film for many fans. Director Taika Waititi (What We Do in the Shadows, Hunt for the Wilderpeople) slides comfortably into the MCU, bringing the same kind of warmth, wit, and spectacle that James Gunn gave to the Guardians of the Galaxy series. Ragnarok essentially uses that Guardians template to wipe Thor’s dour, overwrought slate clean. It’s a complete tonal reboot of both the character and the world that reflects a significant effort to align the “cosmic” side of the MCU (Thor, Guardians, Doctor Strange) into one cohesive aesthetic unit. Marvel clearly sensed their audience's ambivalence toward Shakespearean melodrama and decided to pull out all the stops to set the franchise on a new path by (literally) tearing down what they’d built and starting over. Ragnarok eagerly sheds — and, at several points, mocks — its mythology, presenting a looser and more charismatic Thor who talks to himself, flirts with girls, and seems to realize that this cape-and-hammer stuff is all a little silly. 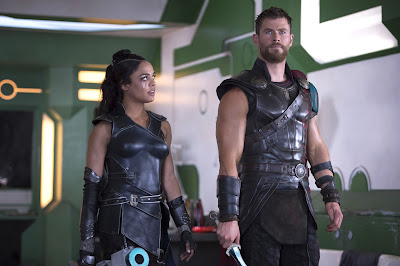 Although it’s undeniably fun, bold, and entertaining, Ragnarok struggles to tell any kind of engaging story. It spends its first hour clearing off a messy table and its second hour setting a new one. The plot moves in fits and starts, which, while frustrating (especially in the case of Hela; Blanchett has nothing to do), are made more tolerable by the introduction of new characters and environments every fifteen seconds. By the time the soft-spoken rock gladiator Korg (Waititi) showed up, I felt like a cat watching a dangling set of keys. But, I get it. I’m awful. People are here to follow relatable heroes on wild adventures, and in that Ragnarok mostly succeeds. Plus, Hulk! There’s not a ton to smash once we leave the gladiatorial ring, but Banner is refreshed with a new arc (less sad!) and a new attitude (he talks!), which is On Brand for Ragnarok and fun enough for now. His abbreviated screen time gives more to Tessa Thompson, who, as expected, is the film’s secret weapon. Her self-indulgent struggle with honor and disillusionment is a nice foil to this more self-aware version of Thor, exemplifying the franchise’s maturation beyond the Glory and Power bullshittery. Then there’s Jeff Goldblum, who occasionally shows up in a bathrobe to dance around, mug at the camera, and remind us that this is all a big, goofy farce.

Boy, I’ve been talking a lot! Sorry about that. Adam, what did you think of Thor: Ragnarok?

Adam: First off - thank you for writing the plot summary. I would have had no enthusiasm left for this review had I done that on my own. That’s not just to be a cheap joke; it’s a major complaint I have with the MCU films, which is that I don’t care about the plot in these movies except on rare occasions. They have great characters and that’s where I respond to them positively. Thor: Ragnarok is no exception. Hemsworth is better as Thor than he is as any other movie character. It’s perfect casting and a signature performance that’s a joy to watch. And I echo your statement on Tessa Thompson, who we’re both big fans of. She is a massive upgrade over Natalie Portman’s underwritten, slightly embarrassed take on her character from the previous two Thor films. I laughed a little at Goldblum, but he’s maybe just a hair too in on the joke for my personal preference. Funniest to me was Taika Waititi’s Korg -- moreso the delivery than the actual laugh lines. There’s a lot to enjoy in this movie when it’s played for comedy. One gripe: why isn’t Kat Dennings in this? She would fit in perfectly with this movie. 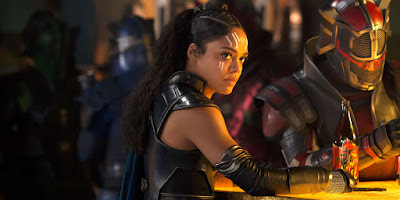 I struggled for the first half-hour or so of the movie because it feels like it keeps restarting in every new scene and then my least favorite Marvel characters in the MCU share screen (Loki and Doctor Strange) and I am almost entirely checked out. Thankfully, the movie relocates primarily to Sakaar shortly thereafter and it’s a blast. We cut back to Asgard from time to time to watch Idris Elba lead a revolt against Cate Blanchett, who is sporting an antler chandelier made by Mercer from The Circle. #JusticeForMercer #I’mGoingToSignOffTwitterInHonorOfMercer #EveryoneWatchTheCircleSoYouGetTheseJokes.

When the movie is focusing on Thor, Banner/Hulk, Tessa Thompson, Jeff Goldblum, Taika Rock Creature, I’m good and the movie is fun, but again this is an ephemeral experience that only exists for me in the moment I watch it. I was hoping with Waititi it would break through into that same rarified Marvel air that Guardians of the Galaxy Vol. 2 or Captain America: The Winter Soldier does for me, but Thor: Ragnarok is mostly a typical Marvel movie. I don’t even know any more if I mean that as a positive or negative. They’re fun. They’re products. There are so many that it’s frustrating they mean so little. How many times will I watch the same thing before I have had enough? I know what spaghetti tastes like! Since I’m going Mark Ahn on the movie, I want to steer towards the positive a little. What were some of your favorite moments from Thor: Ragnarok? 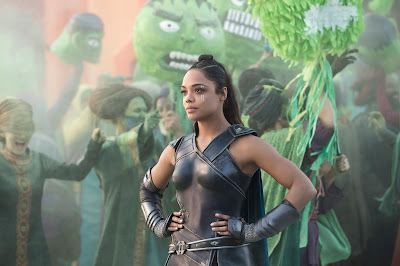 Rob: I’m sitting here and, I swear, I’m trying to think of one joke or moment from Ragnarok that stood out. I definitely laughed out loud several times in the theater, but this movie is just that ephemeral; it exists in the moment and then disappears. I like it. I don’t love it, and I’ll probably remember even less about it in a few days, but I like it. Not even Guardians has this much straight-up comedy. Remember the Willy Wonka scene? I kept thinking it was one step away from Jeff Goldblum showing up, and then Jeff Goldblum literally shows up. Ragnarok knows what it is, lets its hair down, and has fun with it. Though I disagree with the people calling it the best Marvel movie in years (Spiderman: Homecoming), I can understand why they say that. This is a really, really fun movie that taps into that simple, childlike joy we want to feel from comic books, and I absolutely cannot overlook that. Just because it’s way too goofy and self-aware for me to really get invested in doesn’t mean I don’t understand the appeal. Taika Waititi is an amazing creative force. The synth score is badass. Everyone is having fun. I have a gigantic crush on Tessa Thompson. Mark Ahn. #JusticeForMercer.

Adam: Don’t you mean a gigantic jawn? The best Marvel movie in years claim seems to come with every new Marvel movie (except I remember the pre-release buzz on Guardians Vol. 2 was that it was a stumble, which made it a nice surprise for me to see it wasn’t at all) and I guess that’s a testament that these films offer something different for everyone. I also agree with you entirely on Taika Waititi, who is a rare comedy filmmaker that is really funny without ever trying to be cool or vain. He’s just a silly guy and I love that so much about him. I prefer his last two films to Thor: Ragnarok, but that doesn’t mean I’m not happy he has gone mainstream. He deserves the attention (and money) that comes with being a part of the MCU. Maybe next time he can find a way to get Goldblum and Sam Neill in a scene together. This was a good conversation. I think I like the movie a little bit more now. Are you looking forward to next year’s MCU films - Black Panther, Avengers: Infinity War and Ant-Man and the Wasp? For me it’s yes, eh, no. I’m mostly just pumped for Black Panther because it’s any new Ryan Coogler movie and I’m becoming a Chadwick “Vontae Mack No Matter What” Boseman superfan. That guy can hella act. He should team up with Cate Blanchett for a spin-off called Hella Hela with a theme song sung by Ja Rule. I just read in Trivia that Blanchett did this movie for her kids and her son said it would be a career boost for her. That kid’s awesome. 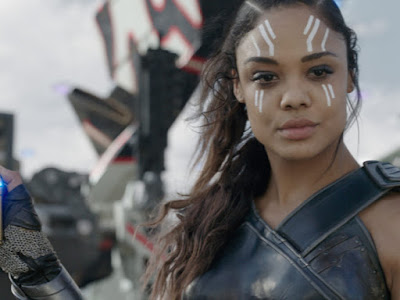 Rob: Tessa Thompson is no jawn. She’s THE jawn. I’d say my excitement for the next Marvel movies has remained at the same “medium” setting for the last few years. That’s not a knock on them at all, just an acceptance that they’re all going to have a similar level of quality. We’re pretty spoiled at this point. Black Panther has the Coogler factor, which is promising. Infinity War is supposed to be the last hurrah for many of the original Avengers, so it’ll be interesting to see how they handle that. And Ant-Man? I mean...sure. Why not? We’re long past the idea that the series will live or die based on any of the individual movies or heroes. It’s just a big sandbox for everyone to play in now, and many of us are just following the larger story to see how it all locks together. I actually like that you can come in and out of the series at will, taking movies off here and there, and come back to a movie that will catch you up on what you missed. That’s what comic books do best. When (if) this all ends, we’re going to look back at it as one of the most significant achievements in studio filmmaking history. It’s been fascinating to see how the storytelling has evolved and adjusted over time, even if many of the films are less than memorable.

Will Blanchett have the antlers in Hella Hela? Can Rihanna play her sidekick? She can remix “Umbrella” for the soundtrack. Either way, I’m in.

Adam: Me too, especially for your adds to Hella Hela. #HelaBackYoung’nWooooWoooo! Until next time…