All My Heroes Got Tired: THE LAST JEDI

“The greatest teacher, failure is.”

There’s this famous study that categorizes the changing attitudes of first-year teachers into a series of phases. August is the “anticipation” phase: the new teacher is full of spunk, eager to reinvent the wheel. Armed with years of textbook theory, they’re ready to begin changing lives. September into October is the “survival” phase: now a few weeks in, they’re overwhelmed by the reality of their position and coping with unexpected complexities and insurmountable expectations. They’re working late into the night on lessons that will be complete disasters the next day. They’re tired, but they’re still able to function as long as they take things one hour at a time. The third (and, at roughly four months, longest) phase is “disillusionment”: between November and February, the teacher will have completely exhausted every available resource. They’ve been through pre-report card grading marathons and parent-teacher conferences. They’re realizing how lopsided their efforts are: they’re doing all the work in their classrooms, and their students are still getting nowhere. They’re doing no better, themselves. They’re getting sick. They’re getting bitter. They’re wondering if this is the right career for them. The first little piece of their soul, dried and cracking like a leaf on a houseplant, crumbles away.

Along those same lines, there’s a scene in Star Wars: The Last Jedi in which Masters Luke Skywalker (Mark Hamill) and Yoda (Frank Oz) discuss the legacy of the Jedi Knights. Luke laments his failure to prevent the corruption of his nephew Ben Solo (Adam Driver), citing his fall to the Dark Side as the reason he’s cut himself off from the Force. What’s the point?, he wonders. This is not a path worth walking. The ultimate hubris of the Jedi was the idea that they could exercise some sort of control over the guiding Force inside of any of their pupils. The Jedi of old — stoic, sexless, and severe — were too rigid in their ideology. On their watch, Darth Sidious rose to power and destroyed the Old Republic. On their watch, Anakin Skywalker became Darth Vader, the darkest evil the galaxy has ever known. They were wrong. As the last living Jedi, Luke has come to the isolated planet of Ahch-To to die in peace. He isn’t interested in training Rey (Daisy Ridley), nor does he have any desire to rejoin his sister Leia (Carrie Fisher) in yet another fight against a faceless, monolithic Empire. The Luke Skywalker of legend is not the man who stands before us; instead, this is a man whose commitment to an ideal has robbed him of his identity, whose dried and cracking soul has finally crumbled entirely. 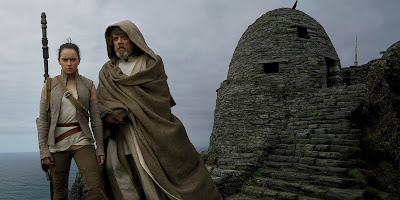 Rey is astounded. How could someone so powerful be so disillusioned? How could Luke reject the enormous responsibility that comes with a legacy such as his? Doesn’t he care that the Rebellion for which he risked life and limb is about to be obliterated forever? Doesn’t he care that Han Solo is dead, or that his fallen apprentice is the one who killed him? Doesn’t he at least want to know where the hell Rey found his father’s lightsaber, last seen attached to one of those aforementioned limbs? Furthermore, how will Rey learn to control the Force surging inside her without the master’s guidance? How will she discover the mystery of her own lineage and become the hero she was always destined to be? “You don’t need Luke Skywalker,” he tells her. The Force is not about swinging lightsabers or throwing rocks with your mind. It’s a relationship you have with the world around you, and trying to manipulate that relationship with jargon out of some withering old texts only leads to disaster. Rey will not find her answers with the Jedi, Luke says, because the Jedi never really had any answers. The Force is fickle, unruly. A hopeless but defiant Rey then looks to Ben Solo (with whom she’s discovered a line of telepathic communication) for guidance and solace. Ben tells her that Luke failed him, as well, with deadly consequences. 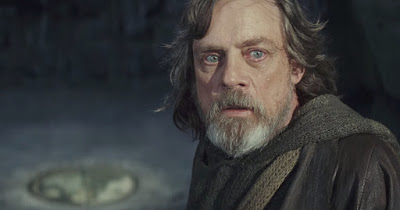 Sitting in the theater, I realized how appropriate it was for me to be seeing The Last Jedi at this exact time in my life. It’s December, the peak of disillusionment season. Long lectures and furious grading have exhausted me. My ancient texts (novels like The Great Gatsby and In Cold Blood, films like Unforgiven and The Third Man) feel as withered and tired as those in Luke’s temple. I’m through trying to Incept some kind of resonant meaning or lesson into the minds of students who’d rather be anywhere else, students who now use that same apathy and frustration as an excuse to give up their own pursuits. I’m tired of my own voice and unconvinced by my own dictums on the importance of higher learning. I am (self-absorbed though this may sound) tired of trying to save the galaxy. Luke’s urge to burn it all down speaks to me in a way that I just haven’t been able to shake. It’s not for a lack of talent on my part or that of my students — like Ben and Rey, they often display frightening power far beyond my own — it’s that wielding this power has failed to provide the spiritual contentment I was promised so long ago. I’ve failed to find peace and harmony in my practice. Worse, that discord feels dangerous — how many Ben Solos am I betraying, and how many Rey Somethings (turns out it doesn’t matter) am I failing to inspire?

Rey soon abandons Luke, convinced that the old man has let his weakness and cynicism consume him. But when Luke moves to burn the ancient temple to the ground (destroying the last remnants of the Jedi Order), he hesitates, provoking Yoda to summon a lightning bolt and do it for him. Let it go, the old master says. Failure is an essential part of growth. We may have grown tired in the pursuit of the Light, but that doesn’t mean it isn’t there. The men and women who practiced its discipline may have fallen to arrogance and infighting, but the Force is still the ultimate power in the universe, the purest source of knowledge and balance. Luke’s only true failure, Yoda says, is forgetting his instructions from Return of the Jedi: “Pass on what you have learned.” Confront your limitations. Admit your frustrations. Share them. They’re part of this. If something doesn’t work, change it. Allow for nuance and adjustment. Move toward the next attitudinal phases, “rejuvenation and reflection.” After a period of rest, a teacher develops long-term coping strategies that provide a sense of confidence and bravery. Bravery enough, maybe, to believe again. To renew our faith in lost causes and look with clarity toward the horizon. Hope, after all, is like the sun: if you only believe in it when you see it, you’ll never make it through the night. 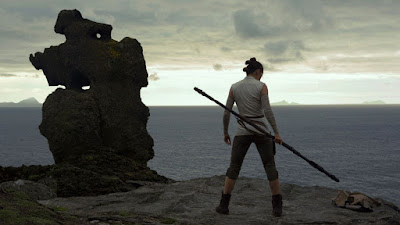 All my heroes got tired
And all the days, they got short
And a love that I dreamt of
Came to me at my worst
Yeah, all the nights I don't remember
Are the ones I can't forget
When all your heroes get tired
I'll be something better yet
Posted by Patrick Bromley at 5:00 AM