What if I told you that I think this Clint Eastwood western from 1976 is just as good as Unforgiven, but in a different way?

Outside of John Wayne, there is no actor more associated with the western genre of film than Clint Eastwood. TV audiences watched his character Rowdy Yates drive cattle across the West for eight years on Rawhide, and then almost immediately transition into spaghetti western icon via Sergio Leone’s “Man With No Name” trilogy. While Eastwood was always taking different types of projects outside of the western, he frequently returned to the oaters that made him famous until he spoke his final word on the matter with 1992’s Unforgiven, a movie that really sums up his entire career within the genre and has some powerful things to say.

Buried somewhere in that long career lies a handful of westerns that Eastwood both starred in as well as directed. Among these is 1976’s The Outlaw Josey Wales, a fantastic piece of cinema that fits pretty safely under the “revisionist western” label. I know that Unforgiven is everyone’s favorite, and that’s probably right, but I have a lot of respect for The Outlaw Josey Wales and the things it has to say. There are some notable differences between the two that make me lean harder into the story of Josey, which is kind of like Unforgiven in reverse. Unforgiven is the story of a salty old gunslinger trying to turn straight in his later years, but is driven to violence through circumstance. The Outlaw Josey Wales is the story of a humble Missouri farmer who witnesses his family’s murder at the hands of Civil War soldiers and finds himself driven to violence through circumstance. Josey Wales is about you and me, pushed to our limits and forced to become something we never thought possible. 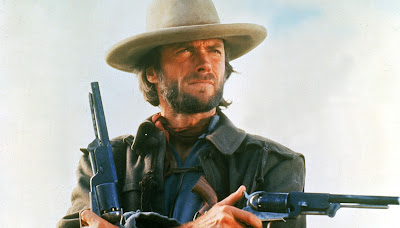 Eastwood’s Josey reinvents himself as something new because he has to do so in order to survive. A Union general, played by John Vernon (Dirty Harry, Animal House) and the soldier responsible for the murder of Eastwood’s family, (Bill McKinney, Deliverance, First Blood) are hot on the trail of Eastwood as he runs away from his old life and toward the unknown, caught in a chain of events beyond his control. The quest is for survival and revenge, but a different kind of family beings to form along the way.

The scope of Josey Wales is huge, though this is somehow done slyly, almost in secret. The grandiose quality sneaks up on you. This movie feels far from the epic majesty of John Ford and Howard Hawks, but somehow we end up there anyway. Eastwood is pursued from the farms of Missouri to the battlefields of the North vs. South, to the arid deserts of Texas, and to the canyons of the traditional West. The Outlaw Josey Wales takes viewers on a visual journey that parallels the emotional journey of its title character. Along the way, Mr. Wales meets lots of interesting characters, including an eccentric American Indian played by Chief Dan George (Little Big Man), a young Navajo played by Geraldine Kearns (Twin Peaks), and the doe-eyed survivor of a raid, played by Eastwood’s frequent collaborator and real-life-love-interest at the time, Sondra Locke.

Let’s be honest; Clint Eastwood has become a divisive figure. In fact, he kind of always was. I don’t think he’s a particularly nice guy, and even before he became politically-outspoken and started railing against presidential candidates, he had a reputation as a womanizer and a man with a violent temper. His on-again-off-again relationship with Sondra Locke sounds like the definition of a toxic relationship, and Eastwood very much represents the outdated stereotype of a certain kind of tough guy that has little place in today’s world. I recognize these things about him, but I also recognize the contributions to movies and TV over his lifetime and I have a hard time not admiring what he’s accomplished and what the work itself says about the man.

For instance, consider the ultimate message of Gran Torino, a movie about racism that Eastwood not only starred in, but also directed. Eastwood also directed a little-seen movie in 1973 called Breezy, which offers a very sympathetic look at the plight of the counterculture through the lens of a flower child who seems completely adrift in her own story. You would expect Eastwood’s take to be hard and unforgiving (no pun intended), but it’s not; it’s trying very hard to understand the mentality of the hippie movement and finds no fault other than humanity in its characters. And in this movie, The Outlaw Josey Wales, we have to remember that Eastwood gives significant roles to Native American actors and doesn’t portray them as stereotypes, but as interesting characters with their own strengths and foibles. This is a revisionist western, which means that the classic tropes of the genre are nowhere to be found (or maybe more accurately, are buried behind rich characterization). When our traveling band of misfits find themselves being observed by a Comanche scouting party, those Comanche aren’t treated like a savage threat, even though that’s how every western had treated them in the forties and fifties. No, in this movie they’re acknowledged as dangerous, but not as something “other than.” There’s no superiority in our heroes. Everyone is on level ground here, and everyone is responsible for their own choices. Decisions like this one make it easier for me to write off some of Eastwood’s prickly past (and present) in the same way that we would ignore the less-than-savory qualities of a grumpy grandpa. Here’s a fact: I had a grandmother who just passed away last year, and she was notorious for dropping a specific racial epithet in public. She was a wonderful lady who would give anyone, regardless of race or creed, the shirt off her back, but she had some really rough edges that came from a hard upbringing in the rural south. Some things just seem inherent in a certain generation. We are all flawed, and we all have skeletons in the closet. Hopefully, those skeletons aren’t so awful that they come to define us, and we can reach beyond them and TRY to be better. I see a lot of reaching and trying to be better in Eastwood’s work. That’s where I’ll stand on Mr. Eastwood until some horrible bit of news comes out that changes my opinion. I hope that day never comes. 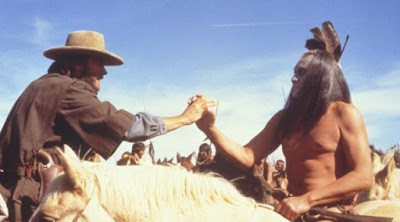 Despite the rough nature of the man who made it and stars in it, The Outlaw Josey Wales is a powerful, beautiful movie. It’s shot wonderfully, and it has a memorable score that was nominated for an Oscar. It tackles familiar western ideas and tropes with a twist. The Native Americans are never the bad guys, and are almost always allies of our main characters. When Sondra Locke’s family is attacked in their wagons as they make their way across the harsh landscape, the raid party is made up of angry white guys, not “Indians.” The violence and rape that follows is tragic and upsetting (this movie is rated PG! 1976, ladies and gentlemen) and the people we should view as civilized in any other western are the real savages. Man is the ultimate enemy of The Outlaw Josey Wales, and man’s desire for war and death. Eastwood has a ton to say about our own urge toward violence and our seeming inability to escape those urges.

While this movie does look at the American West in new ways (grounded, approachable ways), there does end up being a certain grandiosity to it all; the story becomes increasingly mythic and classic as it creeps towards its finale, with saloons, shoot-outs, and straight-up good vs. evil fighting in the dusty streets. By the climax of the film, we’re in western movie heaven. Someone (I won’t say who) even rides off into the sunset as the credits roll, though the movie undercuts this by borrowing from the movie Shane. Do happy endings exist in the gritty, grounded world of The Outlaw Josey Wales? Maybe for some, but only for a little while.

I have loved this movie, and I suppose I still do, but I had a very different reaction to it when I watched it again for this piece. I don’t know if it’s because I’m older now or if it’s because we are ALL older now having survived the last couple of years, but The Outlaw Josey Wales was a sadder experience for me this time around. My personal tastes have drifted to the American westerns of the fifties and even the sixties, when there was more heroism and myth, and bad guys and good guys didn’t necessarily wear black and white hats, but seemed a little bit more defined. There’s a line from John Ford’s The Man Who Shot Liberty Valance (a fantastic film) where a character says “This is the West, sir. When the legend becomes fact, print the legend.” I have found great refuge in watching movies that print the legend, not the fact. Revisiting The Outlaw Josey Wales, a movie made during a tumultuous, unhappy era where heroes were hard to find, reminds me of the world we live in today, and that makes me very sad. But maybe that’s the point. We need the legends, but we cannot forget the facts that inspired them. The Outlaw Josey Wales gives us that factual West, tragic and merciless…but maybe just a little bit of the legend, too.

Email ThisBlogThis!Share to TwitterShare to FacebookShare to Pinterest
Labels: 1976 movies, back to 1976, clint eastwood, the outlaw josey wales, westerns