If the glut of awards season "prestige" movies is wearing you down, I've got just the answers. 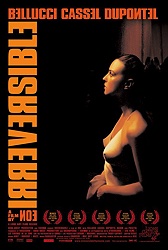 Irreversible (2003, dir. Gasper Noe) This is a hard movie to "recommend," because even though it's pretty brilliant, it's about as deeply an unpleasant and devastating movie experience as you're ever likely to have. It's a rape revenge story told across a series of long takes in reverse, assaulting the senses (particularly in theaters) and challenging just how much horrible shit we can take as an audience. This is my go-to answer for "best movie I never want to see again." Trigger warnings galore. (Watch on Shudder) 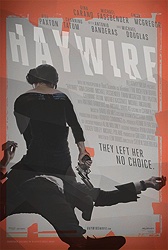 Haywire (2012, dir. Steven Soderbergh) We go from a horribly upsetting movie about a woman being victimized to an incredibly entertaining movie about a woman kicking all of the ass. I think I was mildly disappointed when I first saw Haywire back in 2012 because I genuinely thought it was going to be the best movie ever made. It was not. But it's a movie I enjoy and appreciate more and more every time I see it. The fights are amazing, the cast is incredible, the direction is cool. Gina Carano hasn't gone on to be quite the movie star I hoped, but I still love her and I love her in this movie, even if she's speaking with Kid DeLuca's voice. (Watch free with ads on Vudu) 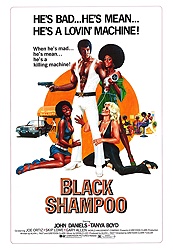 Black Shampoo (1976, dir. Greydon Clark) One of the best exploitation films of the 1970s, Black Shampoo begins as a blaxploitation riff on Hal Ashby's Shampoo but by the end turns into a super violent action movie. John Daniels isn't the most dynamic leading man, but Greydon Clark is such a pro that he knows exactly what a movie like this needs to deliver. This is a case where I saw the trailer for Black Shampoo years ago, knew right away I had to see the movie, and then the movie actually delivered on that amazing trailer. That's rare for exploitation. Still waiting for a company like Vinegar Syndrome to put this out on Blu-ray. (Watch on Amazon Prime Video) 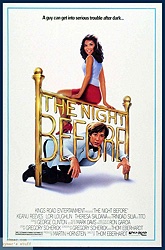 The Night Before (1988, dir. Thom Eberhardt) I mentioned this movie on the site sometime back and a couple of readers commented they had never even heard of it. Now you can all watch it for free! This is a super underrated teen comedy from the great Thom Eberhardt (Night of the Comet, Sole Survivor) in which a charmingly goofy Keanu Reeves plays a geek who takes popular Lori Loughlin to the prom, but then blacks out for the night and has to spend the rest of the following day putting together the pieces of what happened. It involves selling his date to a pimp. I love how Eberhardt was always subverting the conventions of the genres in which he worked, and here he gives us the big prom movie but never shows us the big prom. Also, Keanu's delivery of "It's a little owl!" will never not make me laugh. (Watch free with ads on TubiTv)
Posted by Patrick Bromley at 12:00 PM