NO RESERVATIONS and Bad Cooking Movies 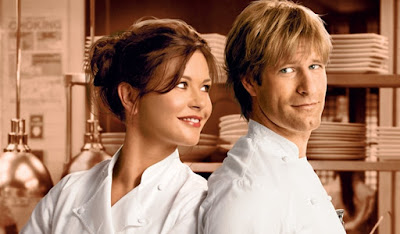 There are two things that everything thinks they know everything about: movies and food.

This movie ran too long. That pasta isn’t cooked to what I would consider al dente. That plot twist is too salty. Have you been to so-and-where? I heard she went vegan for that role!

In other words, everyone’s their own ideal chef and everyone’s their own ideal director. Listen to anyone watch Chopped or review a film. Everyone would do it better or differently or tastier. Now, with all these experts, you’d think that when these two disciplines came together, they’d make magic. I’m talking beautiful and accurate representations of the food industry that would pass like a seven course tasting menu meets Fellini wrapped in a Oscar-worthy monologue. Unfortunately, however, when food and film do combine, the result is often more like a half heated-through Mama Celeste pizza than anything you’d want to sink your teeth into. 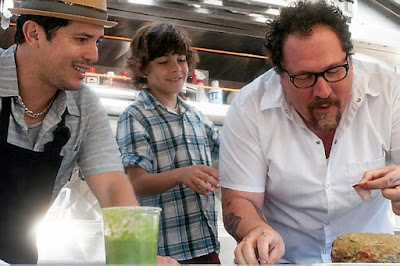 I’m a cook in New York City. I work long hours and love my job more than average. And, as someone who is also a lover of movies, I find it near-painful how my industry is portrayed in film. Aside from Chef (which works because it’s a beautiful movie about family and ALSO food… although no one is buying that Jon Favreau is sexy no matter how tasty his spaghetti is) and Ratatouille, I can’t think of a single movie about cooking that really...gets it—the humor of the kitchen wrapped up in the difficulty of working weird hours in confined spaces. Or, at the very least, doesn’t get in its own way when it comes to chef-y world building. All too often cooks and chefs are presented as social convicts who are too alienated and too job-obsessed to be relatable beyond being something of an angry clown.

And still, I cross my fingers every time I click on a movie that features someone in chef’s whites with some title that puns on heat, service, or anything food-related. And that’s how I came to queue up the Food-Network-meets-Lifetime tragedy that is No Reservations. 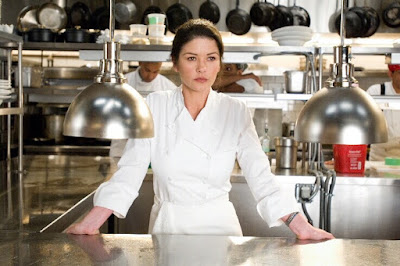 In the version of New York City No Reservations creates, the beautiful — and distractingly robotic —Catherine Zeta-Jones must reconcile her psychotic connection with her job and her recently orphaned niece, played by the saccharinely adorable Abigail Breslin. Despite evidently mourning the loss of her sister, illustrated by exactly one walk-in freezer crying scene, Catherine’s character doesn’t really emote much. She insists on feeding her niece whole fish with the head and eyes still on, and can still ask an 8-year old why that seems unappetizing. That is, until the owner of the restaurant she works at hires a young hot shot sous chef (played by Aaron Eckhart) to co-executive chef alongside her. Maybe sous chef? I’m unsure, and I’m pretty sure the writers of the movie don’t know what a sous chef is.

Before I get ahead of myself and talk about the fact that this movie has FOUR SEPARATE MONTAGES, let me try to explain its pacing: within five minutes, we see that Catherine’s character is so into her job, she uses her therapy sessions to talk braising, roasting, and other ways to prep quail, spitting out food words that don’t make any sense in a sentence, let alone a recipe. Within ten minutes, Catherine’s sister dies, she inherits responsibility of her niece, and she starts acting quirkily annoyed with the child’s presence. Within fifteen, she’s simultaneously in love with and hates Aaron Eckhart's character. All the while, we’re told she’s this workaholic, and yet she doesn’t ever really work. And I’m not ranting just to shit on some feel-good movie about a woman trying her best in New York. I’m shitting on it because it’s so overwrought that there’s barely an entry point.

And I think I know why. No Reservations tries way too hard to convince us that these chefs know what they’re talking about. Every sentence of dialogue is fraught with sabayon this and gastrique that, and while that’s okay if you’re Alton Brown narrating an episode of Iron Chef, in a real kitchen, hell—in real life—no one actually talks like this. 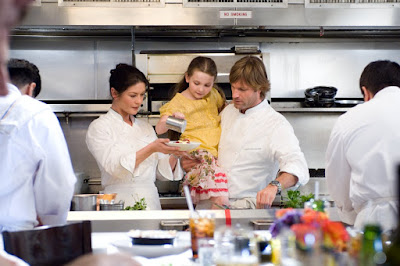 Research is important. And I don’t mean to say that in the I’m going to complain about how unrealistic it is that Matt Damon grew potatoes on Mars kind of way, but details that can make or break any story, from a pseudo lifetime original movie story or a bigger, more profound production. Like, No Reservations shouldn’t require suspension of disbelief because Catherine Zeta-Jones isn’t growing potatoes in space; she’s cooking at a restaurant that wants the audience to feel like it’s a busy West Village joint. It begs the question: why are so many of the basic details wrong?

For example, there’s a scene where the owner of the restaurant (played by a very saucy Patricia Clarkson) tries to brag about the restaurant to Aaron Eckhart. She boasts that that night — presumably a weekend night — they did “150 covers.” “Covers” is restaurant lingo for people. 150 people. On a weekend. That’s what Patricia Clarkson is using to wow the audience and seduce Eckhart. And that’s what I don’t understand. If a writer has gone to the lengths to craft sweeping story arcs and inter-character relationships, why stop at the details? Is it so much more effort to interview some cooks, servers, or read a single food review in the New York Times? 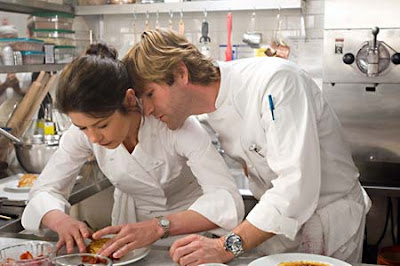 The reason why these things matter — and I hope not only to me — is that they turn what could have been a really beautiful story about the many ingredients of a family and the variety circumstances one can weather into something that watches like a high school English presentation where the kid didn’t even read the book. I’ve heard that the original movie on which No Reservations is based is a lovely film from Germany called Mostly Martha. I’ll have to tuck into that when the movie equivalent of food poisoning this film gave me passes and see if it’s any tastier.
Posted by Patrick Bromley at 12:00 PM