“Bang Bang” is not the sound of Maxwell’s Silver Hammer. It’s the sound of audience members shooting themselves.

We are all interested in bad movies, inexcusable cinema, and dead-eyed businessmen disrespecting the Beatles, for that is the stuff we use to fill our empty ear holes and eye holes. Now, for the first time, we are bringing to you the full story of one of the worst movies ever made. We are bringing you all the evidence, based only on the secret testimony of the miserable soul who survived a screening. I am that miserable soul. The money-fueled hubris; the touchable, golden curls of Peter Frampton; the missing plot; the lack of any dialogue; the risible acting—my friend, we cannot keep these a secret any longer. Let us punish the guilty. (Robert Stigwood is guilty.) Remember, my friends: terrible movies such as these will affect you in the future! Sgt. Pepper’s Lonely Hearts Club Band can haunt you in your dreams! 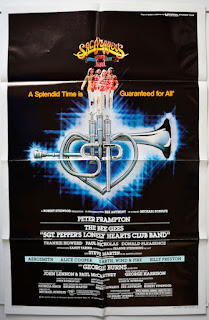 When Robert Stigwood released this massive cinematic turd, he was on a roll. His organization produced the film soundtrack for the hit-filled Saturday Night Fever in 1977, which he followed up with the musical juggernaut Grease, released in June of 1978. What would be the most obvious next step? Why, skull-fucking the most beloved rock and roll album of the twentieth century, obviously. The abomination was released only one short month after Grease, in July of 1978. I remember seeing thousands of “cut-out” soundtrack albums in discount record store bins in the fall of 1978, some selling for as little as a dollar. It was a double album. Some say the failure of the Sgt. Pepper soundtrack hastened the bankruptcy of Robert Stigwood’s record label, RSO.

The Plot in Brief: Heartland mayor Mr. Kite (George Burns) narrates the story of the eponymous band, comprised of Billy Shears (Peter Frampton) and the Henderson brothers (Barry, Maurice, and Robin Gibb of the Bee Gees), who are the grandsons of the original Sgt. Pepper’s Lonely Hearts Club Band. Unscrupulous music mogul B.D. (Donald Pleasence) signs the boys to a long-term contract and whisks them off to Hollywood. Meanwhile, mean Mister Mustard (Frankie Howerd) takes over Heartland, using some magical musical instruments. Billy’s girlfriend Strawberry Fields (Sandy Farina) travels to Hollywood, to convince the boys to return to Heartland to vanquish the menacing Mustard.

Mr. Mustard and his two female robots then give the instruments to the evil Dr. Maxwell Edison (Steve Martin), Father Sun (Alice Cooper), and the members of the "Future Villain Band" (Aerosmith). For what reason, I have no idea. The original Sgt. Pepper (Billy Preston) is brought back to life. He sings, dances around the Heartland town square, and brings all the dead characters back to life. Everybody sings. That’s about it. 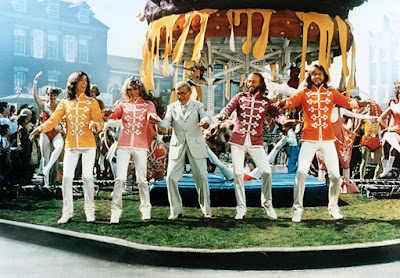 This was Henry Edwards’s first movie script. Producer Robert Stigwood had read a newspaper article about popular music penned by Edwards and, I’m guessing, figured “Words is words.” The problem is that there really is no script, just the barest wisp of a structure to allow for a bewildering, unconnected series of musical numbers of variable quality and invention. None of it makes any sense. Edwards has to use “Being For the Benefit of Mr. Kite” in the movie, so he names a character Mr. Kite and thinks that he’s finished. Problem is, Mr. Kite is played by octogenarian George Burns. If Burns did half the stunts described in the song, he would break into several pieces.

Poor old director Michael Schultz had previously distinguished himself, directing Cooley High, Car Wash, and the two Richard Pryor vehicles Which Way is Up? and Greased Lightning, all huge moneymakers. I am guessing that helming this big-budget Universal musical was his questionable reward. To be fair, I can’t imagine anyone “distinguishing himself” directing this script or these actors performing these songs (George Burns performs “Fixing a Hole” and Alice Cooper hisses “Because.”) Kurosawa? Kubrick? Scorsese? Naaaaaaaaah. Okay, maybe Scorsese.

It’s easy to sort this awful movie’s winners and losers. The losers include Peter Frampton, who jump-started—and jump-ended—his movie career with this single film. From what I have read, the Bee Gees signed on to Sgt. Pepper’s Lonely Hearts Club Band convinced that they would be the film’s stars… only to be eclipsed by Frampton, who was signed after his album Frampton Comes Alive! sold eight million copies in the summer of 1976. Frampton became the star of the film, and there wasn’t a lot left for the Bee Gees to do but mill around in the background trying to look busy. When Donald Pleasance sings “She’s So Heavy,” I want to spend eight years trying to reach him, and then another seven trying to keep him locked up because what we hear is, purely and simply, evil.

Alice Cooper’s voice is treated to so much electronic distortion that it could have been anybody… so why on earth did it have to be Alice Cooper? Many critics consider this film to be the low-point of Steve Martin’s career. In SPLHCB, he overacts and cavorts as if he has just ingested a mountain of cocaine—it’s a performance that more properly belongs alongside Al Pacino in Scarface, only instead of a gun, Martin’s “little friend” is a silver hammer, and instead of being a movie Sgt. Pepper’s Lonely Hearts Club Band is shit. Villain Frankie Howerd was a British stage and television comedian; this was his only film role. He once said that SPLHCB was “like Saturday Night Fever, but without the fever.” Well, at least he could joke about it. 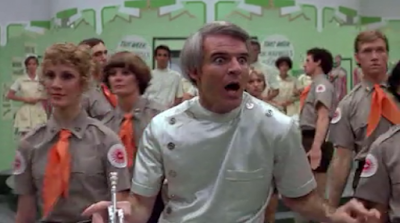 The winners here are fewer and farther between. Earth, Wind, and Fire acquit themselves nicely. Their cover version of “Got To Get You Into My Life” is the best song in the movie and was the soundtrack’s biggest hit. It reached number one on the Billboard R&B sales charts. Billy Preston proves how refreshing a single performance can be; his singing and dancing to “Get Back” at the film’s climax is one of the only entertaining moments in the whole godforsaken thing. Perhaps this has something to do with the fact that Billy Preston might have been the only performer associated with this movie who actually worked with the Beatles? 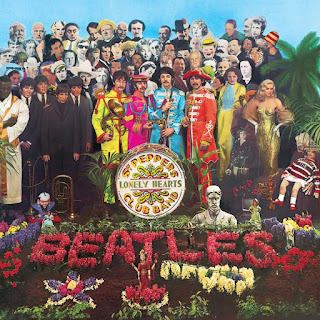 Look at both lists. Read them both again. Which party would YOU rather attend?

“Sitting through what passes for a story here is like trying to make a meal out of a can of vanilla frosting.” James Sandford, Kalamazoo Gazette

My friend, you have now read this column, based on my own sworn testimony. Can you prove that this film doesn’t exist? Shout! Factory just released it on Blu-ray disc, ensuring that it will survive for a thousand more generations! Perhaps on your way home, someone will pass you in the dark, and you will never know it, but it might be Peter Frampton asking you for your spare change. Many scientists believe that bad movies are being filmed at this very moment. We once laughed at fire, gravity, and the horseless carriage, but no one ever laughed at Steve Martin in THIS HORRENDOUS GARBAGE MOVIE.

God help us in the future.