The Bad News Bears seems to represent different things to different people. Some see it as an expose on the competitive world of California Little League. Most people my age would call it the greatest kids baseball movie of our generation (the successor would be The Sandlot). All of these are accurate, but I also see something else: this is one of the first movies to realistically depict a young Generation X.

The Bad News Bears is a classic any way you look at it. Everyone’s heard of it, and even if they haven’t seen it, they know it by reputation. The movie tells the story of Morris Buttermaker (Walter Matthau, sporting one of the greatest names in movie history), a former minor-league baseball player who now cleans pools for a living. Within seconds of meeting him, we’ve read his mail and know exactly who he is. He keeps a cooler of beer on the back seat of his car, chain smokes cigars, and seems to be sleepwalking through his entire life. He’s taken a job coaching a Little League team that makes the inhabitants of the Island of Misfit Toys look like productive, well-functioning members of society. The kids on the team are foul-mouthed, racist, misogynistic, and not very interested in playing baseball. Matthau’s task is to get The Bears into competitive shape to take on rival teams and maybe actually win some games. 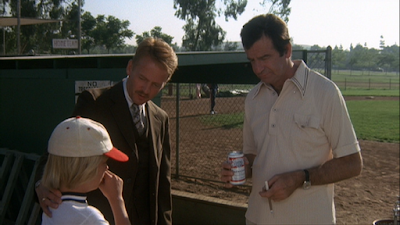 In order to do this, he brings in some outside talent, including Tatum O’Neal and Jackie Earle Haley, and it’s these three actors (Matthau, O’Neal, and Haley) that make this movie so much more than it could have been. O’Neal is the daughter of one of Matthau’s old flames that he left behind; turns out, leaving people behind is what this guy does best. He has a bond with O’Neal that he is willing to exploit when it helps him, but rejects when he senses her getting too close. O’Neal reminds me of Jodie Foster in that she has the presence of an adult in a kid’s body. She plays her part with both strength and vulnerability in a way that’s very natural and realistic. Jackie Earle Haley is the stereotypical wild child, a foul-mouthed rebel who rides a motorcycle and smokes cigarettes. He’s an outsider who would very much like to be accepted, if only he knew how to allow himself to be included. There’s some serious heavy-weight acting going on, and the fact that both O’Neal and Haley were somewhere in the neighborhood of 12 and 14 (respectively) makes it even more impressive. Technically, this movie is a comedy (like technically it’s about baseball), but being from the seventies, it’s not JUST a comedy. There are tons of laughs to be had, but the humor is usually situation-based (example: the jerseys the kids wear are sponsored by “Chico’s Bail Bonds”) and always feels grounded in reality. Matthau can get more mileage out of an understated grimace than other actors can get out of a whole monologue. Once we accept our characters for who they are, we can start to have fun with them. That’s an important distinction to make: this movie has lots of laughs, but it never cheapens our characters. This comedy is a subtler beast. 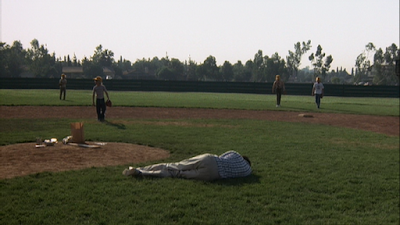 The Bad News Bears was written by Bill Lancaster, and every credit on his IMDB is related to this movie or its sequels with one exception: he also wrote the screenplay for John Carpenter’s The Thing. Not a bad resume if you ask me. This film was directed by Michael Ritchie, a workman-like director who was nevertheless responsible for helming some notable movies like 1977’s Semi-Tough starring Burt Reynolds and Kris Kristofferson (two of my favorite people), Fletch and Fletch Lives with Chevy Chase, The Couch Trip with Dan Aykroyd and Walter Matthau (hey!), and even The Golden Child with Eddie Murphy. None of those movies have the balls of The Bad News Bears.

I love that this movie is a PG-rated family film that has a cast almost entirely populated by children, and yet it’s totally raw. Adults curse at adults, adults curse at kids, kids curse at kids, and then kids curse at the adults. Jackie Earle Haley flicks a lit cigarette at someone. We hear every racial slur you can imagine, and the movie even drops the F-word…not that one; the OTHER F-word that’s usually said by homophobes. And yet, in traditional seventies fashion, everyone in this film refuses to be offended because being offended doesn’t actually get anyone anywhere. There’s a part in the film where Matthau is sitting in a tree with an African American kid (did I mention that The Bears are multi-cultural and have a female pitcher?) and the kid angrily calls Matthau a honky. Instead of being outraged or flabbergasted, Matthau just raises his eyebrows and quietly deadpans the line “Don’t bring race into this, we’ve got enough problems.” Then he goes on like it never happened. I love this so much. 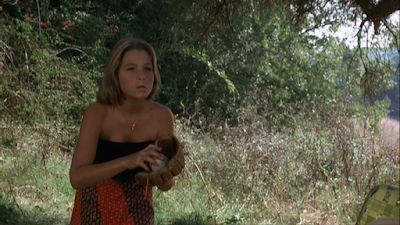 Here’s the thing: I recognize that The Bad News Bears is a transgressive movie, especially by modern standards, but that’s exactly the reason I like it so much. I find it to be super-approachable because there’s no artifice; it lives in the real world. This film is the sandpaper, not the varnish. It never pretends that Buttermaker is anything other than a lazy, chain-smoking alcoholic with self-serving interests. The kids themselves are latchkey children with open hostility toward one another and a penchant for starting fights. Yet, the movie seems to be saying “Yeah? So?” In a modern Hollywood movie, Buttermaker would quit smoking and drinking, the kids would stop fighting, and the Bears would go on to be big winners. That’s not this movie. This is not a Cinderella story where everyone becomes shiny and new by the time the credits roll. When we meet Buttermaker at the beginning of this movie, he’s drinking a beer. When we leave Buttermaker after an hour and forty-two minutes, he’s drinking a beer. Also, so are all the kids.

It strikes me that this movie is over forty years old, but the ugliness on screen looks a lot like the ugliness that’s still around. All the faults and foibles of these characters still apply to us today. All the racial slurs and bickering in this movie? The name calling and the low blows? Yeah, that’s what my Twitter looks like. #EVERYDAY. We are fundamentally-flawed creatures. Instead of pretending that we aren’t, here’s a movie that says “Okay, we’re all messed up and we all have some horrible qualities. But we have some good ones, too.” Our culture today loves to tear people down. We even like to see people get built up so that we can watch them fall farther when they mess up. This movie knows we’re all messed up but says we can do good things anyway. It’s a grimier kind of morality, but one that we can all recognize. 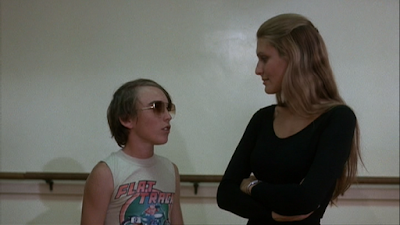 Plus, while there are certain archetypes like “the fat kid” and “the shy kid,” most of the characters here are drawn in broader shades and aren’t one thing. Everybody in this movie has good qualities and bad qualities. Yeah, the coach is a drunk who doesn’t want to get close to anyone. So what? He’s also a good teacher who connects with the kids. Yeah, the kids are rough around the edges and say some pretty awful stuff, but they’re KIDS who are just doing the best they can. This movie is completely without judgment.

Maybe the reason I connect so deeply with this movie is because it reminds me of my own childhood, which is why I identify it as an early Generation X movie. Generation Xers are traditionally defined as being born between the years from 1961 to 1981, and that makes every single kid in this movie a member of Generation X. The Bad News Bears offers us an entire cast of latchkey kids who are not being raised by helicopter parents and must fend for themselves during the daytime. The reason Buttermaker is coaching these kids is presumably because there were no parents willing to take the job. Each kid is coping in his or her own way: some turn to food, some to work, and some lash out against the system that made them. Though it’s slightly before my time, the world in this movie is the one I grew up in. This is my childhood, with the bad snuggled right up alongside the good. Other kids movies at the time couched reality inside fantasy (like Freaky Friday), but this one is shows it like it was, and those of us who saw this when we were young appreciated that it felt like real life. The Boomers had Rebel Without a Cause and The Graduate. My generation had The Bad News Bears. 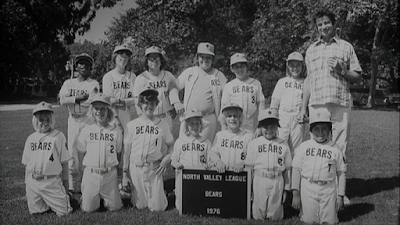 I appreciate the movie because it’s honest and grounded. It isn’t about Buttermaker changing his ways, kicking the nicotine habit and flushing the booze, nor is it about this misfit group of kids becoming the Little League champions (that’s what the sequels are for). Instead, the movie is about putting differences aside, be they race, gender, or lifestyle, and coming together to find the place we belong. It’s not about winning, it’s about forming the team. The journey, not the destination. In depicting this, it becomes one of just a few select films of 1976 that seem to sum up what I find special about that year. The first half of the seventies were a dark, angry time with hope in short supply. Things were changing in 1975 and 1976, and movies like this one and a few others seem eager to pick themselves up, shake off the dirt and the grime (because there’s always dirt and grime), and get busy with the business of BECOMING. This is why I love The Bad News Bears. This is why I love 1976.

Email ThisBlogThis!Share to TwitterShare to FacebookShare to Pinterest
Labels: 1976 movies, back to 1976, baseball movies, the bad news bears, walter matthau