CALL ME BY YOUR NAME: Perfect Summer Love 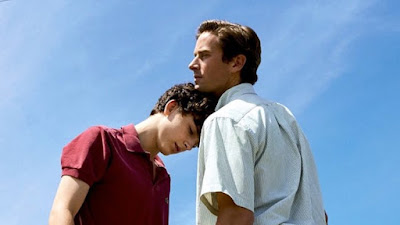 Days that seem to last weeks, living in a bathing suit that’s never quite dry; alternating between salt water, chlorine, and sweat, and sleeping in the sun like old cats — the romance of summer is as timeless as it is universal.

All that idle time is the perfect environment for affairs to blossom to the point where, much like kudzu, a seasonal belovéd takes over your mind and your body — sometimes, even, to a suffocating degree. I’m unsure of whether it’s due to the emptiness that is summer or something else; even after college, I find that lack of responsibility and endless daylight to be somewhat of a romance in and of itself. It’s no wonder that summer time is the lazy backdrop of countless coming of age romance films— it’s the land where Baby and Johnny can fall in love, where Julio and Tenoch ended up taking their own explorations a little too far...I could go on, but suffice it to say that summertime in the cinema seems to give characters permission to succumb to what they want and take being an adult for a spin.

Add to that some billowy button down shirts and many afternoons sneaking away to swim in a deep turquoise river, and you have the sensationally composed Call Me By Your Name. Based on the novel by Andre Aciman, Call Me By Your Name is a coming of age story we all know and identify with, dialed up to eleven. Summer romance is nothing new; it’s a concept practically as old as romance itself. But in the hands of director Luca Guadagnino, it is a finely calibrated work of art that is much more than the some of its handsome parts. 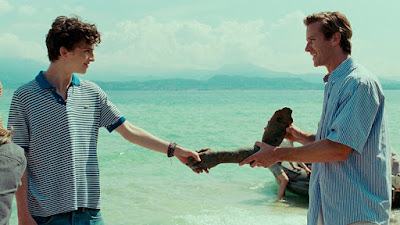 Somewhere in Northern Italy, in a villa inherited by his highly educated parents, is Elio. He spends his days transcribing music, reading, or chit-chatting in a handful of expertly commanded languages— not likely the stuff of seventeen-year-olds, but it seems young Elio is cut from wiser stone. Then there’s Oliver. Oliver is a graduate student working as a scholar in residence with Elio’s anthropology professor father. He is charming to an arrogant degree and ends most of his social interactions with a casual, “later.” Ironically, Oliver and Elio’s father are finding and cataloguing ruins of gender-bending hellenistic sculpture. Already, my gay alarms bells were ringing in the theater.

As the film, largely composed of brilliant cutaways and lingering hands, continues, the young men find themselves romantically entangled. And not in the way that one would think, but in a way that capitalizes on the stillness of summer romance, the awkwardness, the fear of rejection and melancholy. What took me by surprise is there is not a whole lot of lurid scenes or overt sexualization of either men. Rather, the movie focuses on the empty spaces; the spaces where the boys obviously wrestle with their own “what if” spiralling. Again, not in a predictable, self-hating way, but in a way that perfectly captures the nostalgia of a crush — anyone’s crush.

It’s hard for me to put into words the effect that this movie has had on me. Growing up, I didn’t have examples of what the love I wanted looked like on screen -- or anywhere, for that matter. I didn’t see queer love as something that was attainable, let alone beautiful; it was always something that made me nervous, like something I shouldn’t talk about because I didn’t really understand how it worked or if it was okay that that was something I wanted. I remember the first movie I watched about gay people was In & Out. It’s playful and fun...but ostensibly it’s about an entire town going into a brief shock at the discovery that one of its community members is gay. Upon rewatching now, it’s super playful and tongue in cheek, but if that’s all you have to go on, being gay (or queer or trans) is kind of terrifying. And not at all romantic or the stuff of beautiful stories. Call Me By Your Name made me vaguely nostalgic for something I’ve not experienced, and at the same time, makes me really proud to own it as part of who I am. 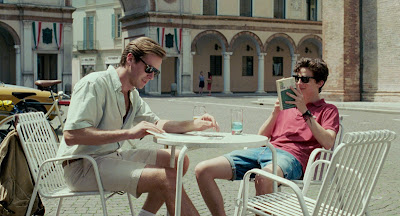 There’s honestly nothing more I wanted from a movie-viewing experience. It’s both beauty and substance, brought to life by a cast that shared tender, sad, and laugh out-loud moments. Armie Hammer — something of a Jon Hamm in blonde hair type — is so tender in his treatment of Oliver as a character and subsequently of Timothée Hal Chalamet’s Elio. Recently, a few articles came out shaming the movie about the characters’ age difference, which, honestly felt like a lot of annoying and useless discourse to me. On paper, sure, I think that 17 and 25 is an age gap that I’m not super cozy with...but at the same time, I don’t think standards are fixed, nor do I think that we’re meant to consider Elio and Oliver’s love for one another as something that lives in their real world. Call Me By Your Name exists in a sort of Arcadia where Oliver and Elio’s conceptions of the world are erased. They both seem to start from square one.

If Hammer and Chalamet’s on screen chemistry is the razor’s edge of the film, then Michael Stuhlbarg’s performance as Elio’s father is a warm, cozy hug. How he and Elio’s mother, played by Amira Casar, managed to telegraph their love and acceptance of Elio is really beyond me. As an audience, we’re never afraid or worried that the other shoe will drop. Instead, Stuhlbarg and Casar keep us at ease and maintain a sense of stability as the story unfolds. There is no tearful discovery, no screaming matches filled with guilt or canned coming out-isms. There is only Elio and Oliver and everything else far out of reach. 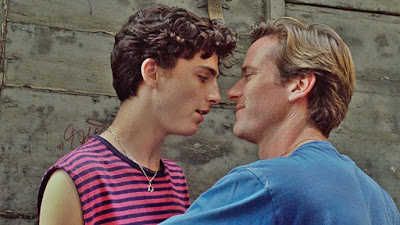 Needless to say, I have a crush on this movie. I’m sure it has flaws, I’m sure it could have been done in a million of other, better ways, but to me it’s really perfect. Have you ever seen a movie that resonated with you so hard, you felt it was made just for you? These rare moments of cinema should be treasured, kept as DVDs or digital downloads or fun movie-going memories. I’m always down for conceptual-based arguing about film, analyzing and arguing for sport is one of the better ways we get to enjoy art collectively. But, damn...sometimes I just want to take the art I love and lock it away where no one can get to it. And if anyone can create art that makes people feel that way, good for them.
Posted by Patrick Bromley at 12:00 PM