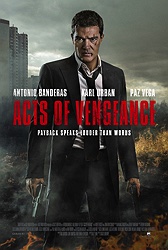 Acts of Vengeance (2017, dir. Isaac Florentine) This movie is not especially great, but I have a rule that I will almost always watch and recommend a new Isaac Florentine movie (except you, Assassin's Bullet, the movie in which Christian Slater is repeatedly hypnotized by belly dancing). This one stars Antonio Banderas as a man who takes a vow of silence when his family is murdered and goes on a revenge mission (also, his silence improves his other senses, so I guess he's Daredevil?). There's neither enough action nor enough Adkins to make this one of Florentine's best, but the few fight scenes there are manage to be mostly cool and it's nice to see Banderas still kicking ass. The supporting cast includes names like Robert Forster, Karl Urban, Johnathan Shaech, and Paz Vega, but their roles amount to mostly cameos. (Watch on Netflix) 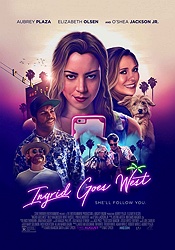 Ingrid Goes West (2017, dir. Matt Spicer) Another movie that showed up on our Favorites of 2017 lists has shown up for streaming! This time, it's Aubrey Plaza in her best role to date as a girl who travels to California to befriend a woman (Elizabeth Olsen) she found on Instagram. The film is dark and funny and sad and has more to say about modern life and social networking than just about anything I've seen in recent years. Plus, it actually gets this stuff right. O'Shea Jackson Jr. steals the movie in one of the most charming performances of last year. Really good stuff. (Watch on Hulu) 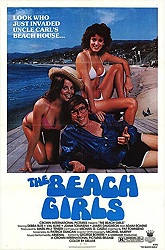 The Beach Girls (1982, dir. Bud Townsend) This is way better suited for #Junesploitation, but it might not be available for streaming by then and I don't want those of you who might enjoy this sort of thing to miss out. This movie is completely moronic, but in the very best way -- the sexed up, raunchy answer to '60s Beach Party movies. The jokes are obvious and stupid, but the cast is genuinely appealing and there's a sweetness to it all, even when it should be really sleazy. This is the kind of junk I love. (Watch on Amazon Prime Video) 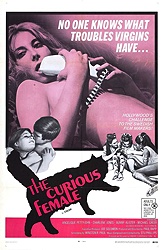 The Curious Female (1970, dir. Paul Rapp) Another one you might file away for #Junesploitation, this is set in the year 2427 when the world is run by a supercomputer that has gotten rid of the idea of love and romance (the alternate title is Love, Computer Style). A group of friends still get together to watch old sex movies, though, meaning the film cuts back and forth between the sex movie they're watching and the future-set wraparound. The film is fixated on virginity, but is surprisingly socially conscious about issues of gender, race, and sexuality. It's goofy and sometimes sweetly innocent despite showing quite a bit of skin. I dig it. (Watch free on Shout! Factory TV)
Posted by Patrick Bromley at 12:00 PM