Goodness in I DON'T FEEL AT HOME IN THIS WORLD ANYMORE 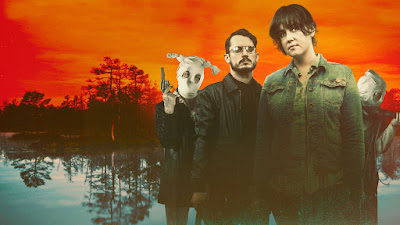 A set of stolen silver, a book on the cosmos, and a steaming pile of dog poo.

These are the agents that catapult Ruth, a soft spoken nursing assistant, into a frenzied desire to right wrongs that have been done to her in a town of lower-income Southern suburbia. As the depression of banality—mixed with the modern American climate of violence and turning a blind eye—weigh on the shoulders of Ruth, the wave of her ennui crests after an uncaring police force can do nothing to help her in catching the thief that broke into her home. What happens next can only be described as a tale of misfits turned buddy cops navigating the dirge of existential modernity. And boy, is it the exact correct movie to watch as 2017 comes to a bitter, and very confusing, end and 2018 begins the same way.

Humankind has always struggled with our confrontation—and cohabitation—with death. As your twenties crumble into your thirties and beyond, the reminders of our unhappy home with death and existence magnify in size and sound, keeping us either all too aware of the end, or completely dissociated from it. As I watched I Don’t Feel at Home in this World Anymore (a title that is funny in its sincerity), I couldn’t stop thinking about Albert Camus’ La Peste (The Plague). A book that many were forced to read in high school, Camus’ La Peste pokes dark fun at the absurdity of modern society in the wake of a pestilent epidemic; an allegorical representation of the third reich. What the book does, and what the film builds its mood upon, is superimpose the regular-ness of everyday life with the tragedies that swarm and multiply around us. Whether this is to light tragedy for what it is; an aspect of regular life, or to criticize us as humans for paying more attention to our daily grievances as civilizations fall around us, I can’t say. But I prefer to believe the former. 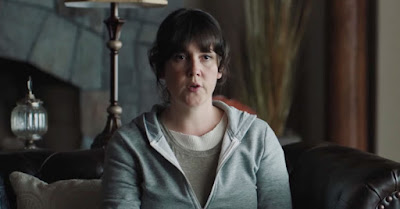 “The world is bigger than your silverware!” Detective William Bendix shouts before choking up at his desk. Ruth, having just presented a potential suspect, sinks back slightly in her chair, realizing she’d just struck a nerve with the fast talking cop. Yes, the world is full of horrors, and the tiny speck we do see everyday in the palms of our hands is suffocating. And it begs the question: what can we do? After all, we are small, carbon based animals just trying to make sense of a society we somehow created. From dust to dust, it’s all absurd.

And from a hunch, Ruth’s own small world of absurd horrors is born. In her search for good, she meets Tony (played by Elijah Wood wearing a fantastic rattail), an out of touch hipster boy with a desire for friends and a Katana collection. The pair’s fate is sealed as they bounce from clue to clue down a rabbit hole of poorly planned robberies, an aimless search for moral correctness, and a sense of purpose.

In a stunning performance, Melanie Lynskey brings to life the contemporary do-gooder. A person frustrated by the guy driving a Hummer while driving themselves down the passing lane, a person who thinks injustice is a shame yet does not seek to tip the scales in anything other than their own favor — essentially, a person who believes in do-gooding, yet through circumstances of our own malaise and societal immobility, does little good. As she slips down deeper into her own search for this idea of Good, she airs her worries to Tony,

“What are we doing? Here I mean… in this world?” to which he replies, “Trying to be good. Well, trying to be better, I guess…” 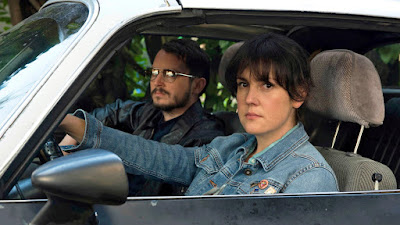 Ruth plays on all of our own existential fears while Tony, serving some much-needed comic relief, is sort of child-like. In his own Don Quixote way, he is a true do-gooder. He’s weird, what one would probably call, “a bit too much,” and sticks to a cartoonish sense of right and wrong. While Ruth is the driving force behind the plot’s hurtling pace, Tony, much like the loyal dog he always takes around with him, is consistently loyal. Against a bucolic backdrop of the Southeastern US, we see how Ruth and Tony’s game of a existential/neurotic concept of Good versus a childlike, more primal sense of Good plummet into a brand of violence that somehow seems both very real and almost satirical all at once.

What writer-director Macon Blair accomplishes in this profound movie in indie darling clothing is capture the nuances of the brand of existentialism found in Camus’ La Peste. While there is a darkness — one so dark it feels like it could swallow you up — in existentialism, there is also a call to Goodness. A call to make your small connections as meaningful as possible; a responsibility to better the ten square feet around you at all times. Doom and gloom is only what sets in when you can’t see the forest for the trees; there will always be dog shit on someone’s lawn, bad things will always happen, but that doesn’t mean we have to ignore the good we can do. Blair paces his masterpiece slowly at first, then all at once, then, thankfully, gives the viewer a sunny ray of hope in the form of a backlit Tony, smiling at Ruth. 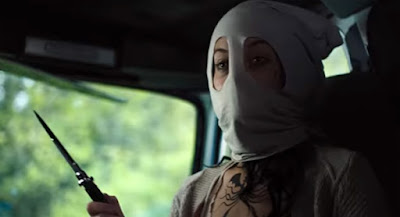 Playing heavily into the vibe of recent media ventures like Search Party and Hunt for the Wilderpeople, I Don’t Feel at Home in this World Anymore takes real life rules and standards and pushes them to their limits. What if you were robbed and you were looking to seek justice? How hard would the culprit be to find? What would be the consequences for those actions? Can you still be a “good person” and still cause so much collateral damage? Can an audience walk away liking characters that do shitty things? These forays into our angst and dissatisfaction with our own mortality and futility is oddly comforting. I like this trend of anti-hero failing at making a difference in the grand scheme and yet still finding some sense of right-ness and wrong-ness in a world so utterly upside down, it’s impossible to find a relatable voice.
Posted by Patrick Bromley at 5:00 AM