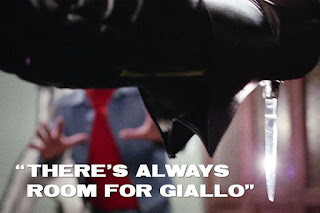 This may be the last great Argento movie.

The horror genre has known few voices greater or more influential than Dario Argento, a master craftsman and revolutionary stylist who, from his debut feature The Bird With the Crystal Plumage in 1970 through the late 1980s, is responsible for some of the best horror movies ever made: Deep Red, Suspiria, Tenebrae, Phenomena. In 1987, he wrote and directed what might be his final masterpiece, the giallo-tinged slasher Opera, arguably his most technically accomplished -- and bloodiest -- film. While more of a standard whodunit than his abstract supernatural efforts, there is such precision to the photography, such expertly staged choreography both in front of and behind the camera, that the movie deserves to be named among his greatest works if only for the dazzling purity of the filmmaking on display. 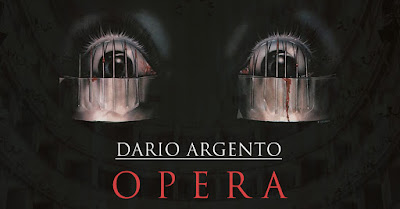 Opera was my first exposure to Dario Argento, but it wasn't the full feature film that got me hooked. I was being shown the documentary Fear in the Dark during my high school film studies class and there was a clip from a movie I did not recognize in which a woman (whom I would later discover to be the great Daria Nicolodi, underused here as she would be in some of her later collaborations with Argento) looks through the peephole of a door; one moment later, a bullet travels through the peephole in extreme close-up -- and I do mean extreme -- and tears right through the woman’s eye, killing her instantly. While I wouldn’t actually see Opera for many more years, it was a scene and a title I never forgot. Such is the power of that single image.

But let’s back up for a second. There is an obsession with the eyes that runs through the history of Italian horror, from the voyeuristic POV sequences of many a giallo film to the endless eyeball trauma in the work of Lucio Fulci. Lamberto Bava’s Delirium contains a striking image in which a woman’s entire face becomes an enormous eye; Umberto Lenzi made a movie in 1975 called, quite literally, Eyeball. Argento’s Opera is a film fascinated by the process of “looking,” opening as it does on the eyes of a raven that later sees the killer’s face and becomes a recurring motif throughout the story, ultimately playing a major role in the movie’s denouement as a flock of ravens attacks the opera house, plucking and eating -- what else? -- the killer’s eyeball during a climactic performance of Macbeth. Like the Greek myth of Oedipus, the killer is literally blinded for having sexual congress not with his own mother, but with Betty’s years earlier when he was a young man. 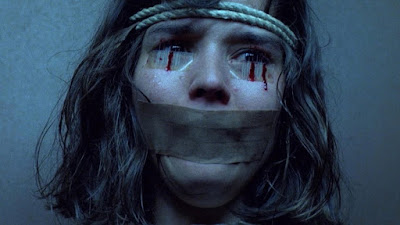 Eyes play a key role in each of the film’s amazing murder sequences, too, as the killer pries Betty’s eyes open with tape lined with needles, forcing her to watch because closing her eyes would mean tearing them apart. Like the raven that sees the killer’s face, Betty eyes are crucial to the themes of Opera; it is a movie about bearing witness. Argento even stages a few POV shots of Betty looking out from behind these needles, which form what appear to be the bars of a prison in which she is helplessly trapped. Argento and editor Franco Fraticelli keep cutting back to the eyes, always watching, always terrified. Betty represents us reflected on screen: time and again, the director sets up and executes brutal murders and we cannot look away.

If the narrative of Opera is a shade weaker than other Argento classics -- and I would contend that its mystery is less compelling than the likes of Tenebrae or Deep Red -- he certainly never acts like it. This is his most confidently directed film, with every shot, camera move, and every cut carefully staged for maximum visceral impact. The technical filmmaking on display in Opera gives even the most devoted Hitchcock acolyte -- Brian De Palma, for example—a run for his money in its sheer visual storytelling. The theme of “looking” extends from the characters on screen to cinematographer Ronnie Tyler’s camera lens to us in the audience, with Argento guiding our eye at every turn, expertly telling us what to see and when. 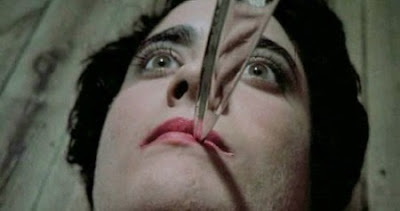 One big change between Argento’s past thrillers and Opera is in its soundtrack, here assembled from a number of artists instead of the usual single composer. Argento indulges in the love of metal music he first experimented with in Phenomena’s use of “Flash of the Blade,” again incorporating songs like Steel Graves’ “Knights of the Night” at somewhat inopportune moments. Regular collaborator Claudio Simonetti contributes a couple of cues, most notably the movie’s gorgeously haunting theme, but the rest of the soundtrack is comprised of classical opera pieces from Puccinin, Bellini, and Verdi, plus score cues from Brian Eno and even former Rolling Stones bassist Bill Wyman.

It’s a more eclectic mix than the usual Argento soundtrack, but that represents the director’s efforts to evolve and push himself in new directions after more than a decade of mastering the form. Opera is, in many ways, the end of the Golden Age of Argento; he wouldn’t direct another solo feature for six years (1993’s Trauma) and, as far as this writer is concerned, never again matched the quality of his output from this period.

After what seems like an especially long wait, Opera is finally getting an American Blu-ray release courtesy of Scorpion Releasing and Doppelganger Releasing (a subsidiary of Music Box Films). This is the uncut version of the film, presented in 2.35:1 widescreen in full 1080p HD and with two different audio options: a lossless 5.1 mix and a lossless stereo mix. In addition to a handful of different trailers for the movie, Scorpion's Blu-ray includes an interview with Argento and a really fun, candid interview with co-star William McNamara (you know, Joel? Psycho Joel?), a fairly well-known American actor whose English dialogue is nonetheless dubbed by a different actor. Rumor has it that a much more elaborate special edition will be released later this year containing new bonus features and multiple languages and cuts of the movie; until then, we're going to have to make do with this version.

To call Opera Argento’s last great movie is not to discredit the remainder of his career, which certainly contains its share of films that range from good to interesting (as well as a few better not mentioned), nor is it to suggest that the achievements of Opera are as good as the director ever got. Most filmmakers are lucky if they can craft a single masterpiece in the course of their careers. Argento has five or six to his credit. 1987 was a legendary year for genre movies, but one of its most significant contributions will forever be that it gave us the last best film from one of the greatest horror filmmakers of all time. Now that’s something to sing about.