We are all interested in bad movies, inexcusable cinema, and the barest excuses to present a tawdry series of strip-teasers to the unsuspecting public, for that is the stuff we use to justify our blank, pitiless existence. You are interested in the unknown, the mysterious, and Ed Wood—that is why you are here. And now, for the first time, we are bringing to you the full story of one of the worst movies ever made. We know that many uninformed people think Plan 9 From Outer Space is the worst movie ever made, but believe you us, this movie makes the infamous Plan 9 look like a multiple Academy Award winner! 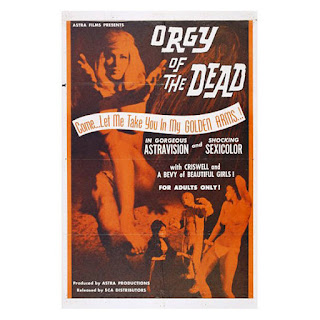 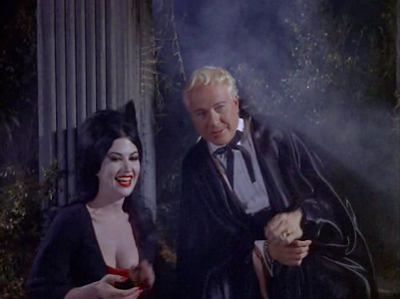 The Plot in Brief: A rapscallion horror writer named Bob (William Bates) and his main squeeze, Shirley (Pat Barrington, listed in the opening credits as Pat Barringer), drive to a cemetery in Bob’s cool convertible. Bob inexplicably crashes the car. As the two walk safely from the wreck, they witness a strange ritual of alluring dance. The Mummy (Louis Ojena) and The Wolf Man (John Andrews) show up to grab the lovers and take them to the “Emperor of the Night” (Criswell). The “Princess of the Dark” (Fawn Silver) wants to execute the pair, but Criswell is too busy imperiously passing celestial judgment on the dancers to second the motion.

What Really Happens: Criswell reads from cue cards and wears too much lipstick. He sounds like he may have been inebriated during filming. The first time Criswell appears on screen, he holds his Dracula cape in front of his face (apparently, the same cape worn by Bela Lugosi in Abbott & Costello Meet Frankenstein, a story included on the excellent commentary track.) This seems to be a wordless homage to the way Bela Lugosi’s stunt double held the cape to obscure his identity in Plan 9 From Outer Space. The “Princess of the Dark” looks a lot like Vampira. The actor playing Bob has a big grey paint smudge on his forehead, which I am guessing is a lazy make-up person’s idea of a bruise. The audience is “treated” to a variety of “dances”: Indian dance! Fluff dance! “Gold Girl” dance! Cat dance! Slave Girl dance! Hawaiian dance! Skeleton dance! Zombie dance! Mexican dance! That Chicken dance people do at weddings! Okay, I made that last one up. Sometimes, the Mummy and the Wolf Man point and gesticulate to show that they are enjoying the dancers. During this listless, protracted spectacle, Criswell shouts things like “Throw gold!” and “Torture, torture, it pleasures me!” and “Permit her to live in the world of the snakes!” At the end of the film, Criswell offers a spin on Plan 9 from Outer Space’s famous line, “Can you prove that it didn’t happen” by loudly intoning, “Who can say that we do not exist—can YOU?”

Ed Wood is writing here at his finest. No one else on Earth wrote dialogue like that; it’s as unique as a fingerprint—can YOU? 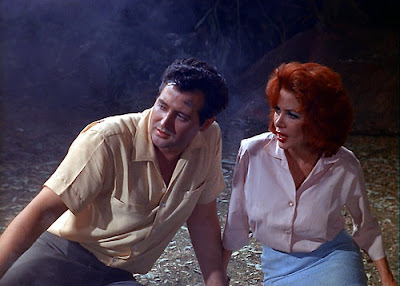 Unless we are fans of “nudie cuties,” I am guessing that most modern viewers are here for Ed Wood’s famously crazy dialogue. On this, the film does not disappoint. When Bob brags about how his horror stories have brought him money and success, Shirley chimes in that she has no stomach for them. Bob opines, “Shirley, I wrote for years without selling a single word. My monsters have done well for me. You think I’d give that up just so I could write about trees, or dogs, or daisies? Daisies! That's it, I'll write about my creatures who are pushing up the daisies… Your puritan upbringing holds you back from my monsters, but it certainly doesn't hurt your art of kissing.”

At one point, Criswell weighs in with the breathless, “A pussycat is born to be whipped.”

Pat Barrington is something of a cult figure. Her pretty face and statuesque… charms graced a few noteworthy, low-budget films in the 1960s. This was her first film, and she plays a dual role, as both Shirley and the “Gold Girl,” an obvious nod to the Shirley Eaton character in the James Bond film Goldfinger, released the year before. Not only do we get two Pat Barringtons for the price of one, but at several points in the film, Pat-as-Shirley watches herself dance as Pat-as-Gold Girl. It’s surreal. (Later in the decade, Barrington also had memorable roles in The Agony of Love and The Acid Eaters.) 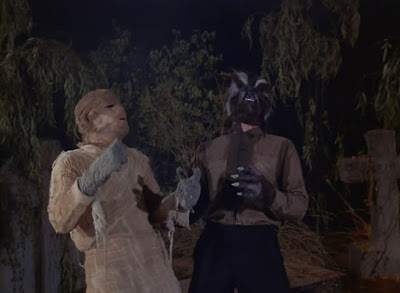 “Bizarre even by the standards of Wood's filmography…”
--Ian Jane, Rock, Shock, Pop

“ One can imagine this movie playing in some lodge where a group of smiling guys sit and smoke cigars and drink whiskey while watching.”
--Mark Turner, Digital Views

“Whoever is behind the smoke machines does a good job[…] This production may be cheap but it’s obviously not the disaster that most of Wood's films were. Not a single gravestone falls over, not even once.” --Glenn Erickson, DVD Savant

Vinegar Syndrome’s new Blu-ray release is to be commended for an eye-popping, colorful transfer and a wealth of supplementary features. The commentary track by filmmaker Frank (Basket Case) Henenlotter and Rudolph Grey, author of the Ed Wood biography A Nightmare of Ecstasy, is a must-listen. Although it breaks down towards the end into confusion and often silence, for the first hour it is loose, conversational, and loaded with interesting trivial tidbits. This is one of the better commentaries I have heard in a very long time, certainly ten times more entertaining than the movie itself. At one point, Henenlotter reads some of the promotional material from the film’s press book, cackling at advertising lines that seem written by Wood himself, such as “The film that will satisfy every ‘oversexigessimal’ adult” and “See the wild frolicking of twelve dead girls!”

There are nine dead girls.

My friend, you have now read this column, based on my own sworn testimony. Can you prove that this film doesn’t exist, can you? Perhaps on your way home, someone will pass you in the dark, and you will never know it, but he may be Steven Apostolof, the director of Orgy of the Dead. Many scientists believe that bad movies are being filmed at this very moment. We once laughed at fire, the wheel, and Criswell, the failed television psychic. So much laughter! And now some of us laugh at very bad movies. God help us in the future. Let’s dance.